SFC (Join to see)
1.76K
14
3
11
11
0
MOSUL, Iraq — Iraqi forces have won a string of swift territorial gains in Mosul in the fight against the Islamic State group after months of slow progress. Government troops retook the eastern edge of a third bridge in Mosul Saturday and a cluster of buildings inside Mosul university, according to a senior Iraqi officer overseeing the operation.

IS fighters overran Mosul in the summer of 2014, announcing from there their self-styled "caliphate" after taking a large swath of Iraq and Syria in a lightning surge. Access to the city's central bank, a large taxable civilian population and nearby oilfields quickly made ISIS the world's wealthiest terrorist group.

Yet even as a punishing campaign of U.S.-led coalition airstrikes has pushed the militants underground, ISIS leaders continued to use Mosul as a key logistical hub for planning meetings. If recaptured by the Iraqi forces, ISIS territory in Iraq that once stretched across a third of the country would be reduced to small pockets in the north and west that troops will likely be able to mop up relatively quickly.

Iraqi forces now control the eastern sides of three of the city's five bridges that span the Tigris river connecting Mosul's east to west. Warplanes from the U.S.-led coalition bombed the city's bridges late last year in an effort to isolate ISIS fighters in the city's east by disrupting resupply routes.

At Mosul University, senior commanders said that Iraqi forces have secured more than half of the campus Saturday amid stiff resistance, but clashes were ongoing into the afternoon. Iraqi forces entered the university from the southeast Friday morning and by nightfall had secured a handful of buildings, Brig. Gen. Haider Fadhil and Lt. Gen. Abdul-Wahab al-Saadi said on a tour of the university Saturday.

"We watched all the ISIS fighters gather in that building, so we blew it up," said special forces Sgt. Maj. Haytham Ghani pointing to one of the blackened technical college buildings where charred desks could be seen inside. "You can still see some of their corpses," he added.

Thick clouds of black smoke rose from the middle of the sprawling complex Saturday morning. By afternoon, clashes had intensified with volleys of sniper and mortar fire targeting the advancing Iraqi forces. Convoys of Iraqi Humvees snaked through the campus, pausing for artillery and airstrikes to clear snipers perched within classrooms, dormitories and behind the trees that line the campus streets.

As Iraqi forces have closed in on the Tigris river that roughly divides Mosul into eastern and western halves, their pace has quickened. ISIS defenses in the city's east appear to be thinning and unlike in the surrounding neighborhoods, Iraqi officers said they believe Mosul university and recently retaken government buildings are largely empty of civilians — allowing them to use air cover more liberally.

Iraqi soldiers at Mosul university said while they were still coming under heavy small arms fire, ISIS resistance was significantly less than they faced during the first weeks of the Mosul operation.

"We were targeted with only four car bombs where before (ISIS) would send 20 in one day," special forces Lt. Zain al-Abadeen said. "And they aren't armored like before, they're just using civilian cars."


Medics operating a small field hospital in eastern Mosul said civilian casualties have dropped significantly over the past three days as Iraqi forces moved into government complexes like the university rather than dense civilian neighborhoods.

The massive operation to retake Mosul from ISIS was launched in October. Since then Iraqi forces have slowly clawed back more than a third of the city. ISIS maintains has tight control of the city's western half where Iraqi forces will likely encounter another wave of heavy ISIS resistance. The west of the city is home to some of Mosul's densest neighborhoods and an estimated 700,000 civilians.

Also Saturday, ISIS launched its biggest assault in a year on government-held areas of the contested Syrian city of Deir el-Zour in an attempt to maintain a grip on the eastern stretch of the neighboring country where the group's de facto capital of Raqqa lies. 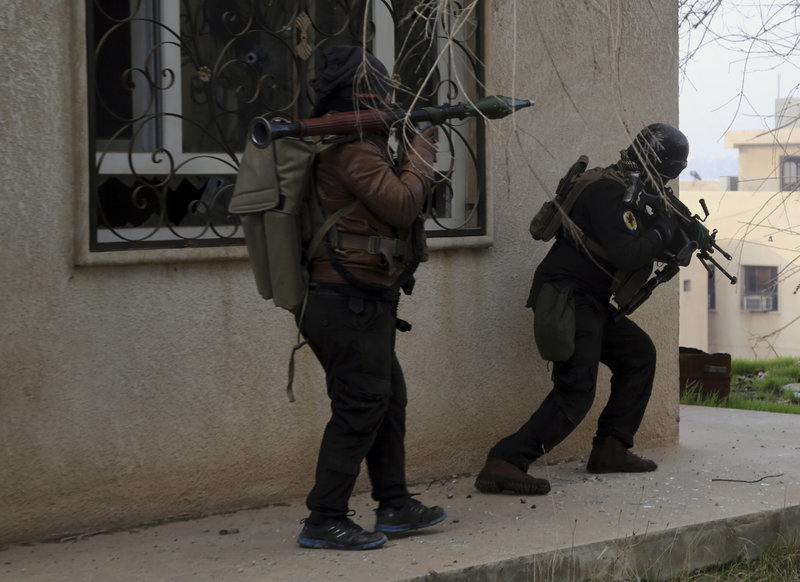 SSG (Join to see)
Posted >1 y ago
Wow. We (101st Airborne Division) were on Mosul University back in 2003. I used to go out with the BDE commander and Civil Affairs every week. If Iraqi Forces take Mosul I hope they have a solid plan to hold that territory.
(1)
Comment
(0)

MCPO Roger Collins
Posted >1 y ago
Last I read, should take about three more months. Hope that is based on good analysis rather than optimism.
(1)
Comment
(0)

SMSgt Dr. G. A. Thomas
Posted >1 y ago
Great news; need to provide additional pressure on them
(1)
Comment
(0)
Read This Next
RallyPoint Home