SFC Joe S. Davis Jr., MSM, DSL
796
7
4
5
5
0
MOSUL, Iraq — The bodies of two dead Islamic State fighters have been lying on the sidewalk in front of Muhammad Jassim's house in eastern Mosul for the past week. Both of the corpses were burned, abused and decapitated, one was partially covered by a pastel floral bed sheet.

"This isn't something we want our children to see," Jassim said, coming out into the street to approach a group of Iraqi special forces officers touring the recent territorial gains. "I asked them to please take the bodies away, the smell is terrible."

As Iraqi forces settle into a routine of slow, steadier progress inside Mosul, more civilians remain trapped living along front lines for longer. Jassim's Mishraq neighborhood was declared liberated from IS nearly a week ago, but remains too dangerous for most aid groups to visit as it lies just a few hundred meters from ongoing clashes.


"We've received nothing," Jassim said. Around the corner from his home a group of men filled plastic buckets with water from a burst pipe in a crater left by an airstrike.


Another resident, Younis Ali, ran up to the officers asking for heating fuel or electricity. Families on Ali's street have begun collecting scraps of wood and cardboard to burn for heat as temperatures have repeatedly dropped below zero in Mosul over the past week.


"We want people to know that this area is safe, that the military is here now," al-Saadi said, but he admitted that he expected progress to continue at a slow pace.


"We are so thankful for these soldiers," Jassim said of the half dozen black armored Humvees dotting his neighborhood, "but what we really need now is a medical center." 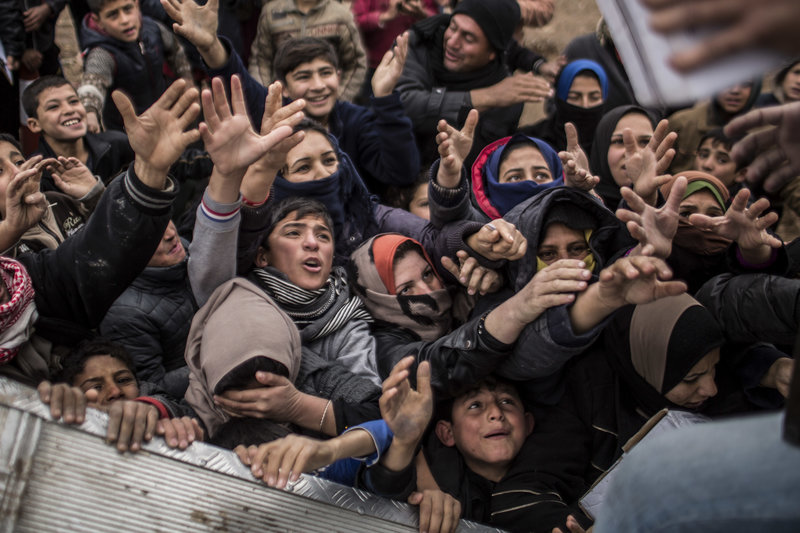 LTC Stephen F.
Posted 3 y ago
Images of abused bodies of despised enemies reminds me of many actions in WWII in Europe and Asia. This is a fact if life. I hope each ISIS thug is terminated and images of their decaying bodies are broadcast to ISIS wannabes. SFC Joe S. Davis Jr., MSM, DSL.
The weather is getting cold so decomposition of the dead will slow down. Hopefully the bodies could be bulldozed and burned after identifying information is collected to provide closure. I expect that the parents of ISIS thugs love their despicable children like every other parent usually does.
Hopefully the city will be cleared of ISIS and their supporters and all booby traps and mines and life will begin to return to normal by spring 2017 throughout the Mosul region.
SP5 Mark Kuzinski TSgt Joe C. LTC Stephen C. Capt Seid Waddell CW5 (Join to see) SFC William Farrell SSgt (Join to see) SGT (Join to see) SGT Forrest Stewart SPC (Join to see) SrA Christopher Wright Maj William W. 'Bill' Price Capt Tom Brown SMSgt Minister Gerald A. "Doc" Thomas SFC James J. Palmer IV aka "JP4"SSgt Robert Marx SGT Robert George PO2 Ed C.
(1)
Comment
(0)

SSgt Robert Marx
Posted 3 y ago
Living in and around the front lines of an on going war is dangerous, putting it as mildly as possible. Reminds one (or at least me) of the struggle for survival by the Russian inhabitants of Stalingrad during the siege of that town in late 1942 & early 1943. The German Army kept fighting house by house as they retreated just as they fought house to house to capture the town. The Daesh criminals hopefully will either be killed in action or rounded up for long term detention. Those thugs need to be secured away from civilization so as to keep people safe from their barbarity.
(0)
Comment
(0)

MAJ Joe Bentley
Posted 3 y ago
It will take continued occupation of Mosul and all Iraq to secure it completely. While a firm military is in control, fairness in providing services to the splintered population is necessary. The goal must be security then decentralized local government as security is attained. Decentralization would give various factions control of their own destiny. The only answer in that country and region is a strong federal government and a federation of regions which understand the firmness of the government of the country along with the resolve for self determination by local governments. I am not advocating democracy, but a strong dictatorship wisely administered.
(0)
Comment
(0)
Show More Comments
Read This Next
RallyPoint Home