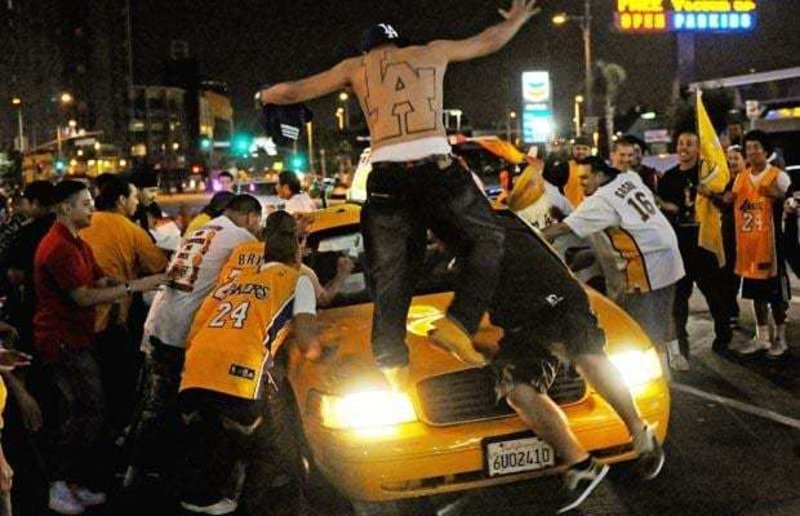 Posted from theconservativeoutlet.com
Posted in these groups:

MSgt Robert "Rock" Aldi
9 mo
Don't claim to be very savvy about professional sports contracts Bud...but the buzz phrase I often read is "guaranteed $$$$"...makes me wonder if athletes get paid no matter what...if that is the case...well..draw yer own conclusions...no fans in stands sure...but the TV networks..cable..etc is still there...the show "must" go on???
(3)
Reply
(0)

SGT Robert Pryor
9 mo
MSgt Robert "Rock" Aldi - I have no knowledge about that either, but I would guess that TV pays a great portion of the costs.
(3)
Reply
(0)

The Lakers won their 17th championship Sunday evening and thousands of fans immediately began to celebrate throughout Downtown. LAPD immediately declared a c...

Thank you my friend MSgt Robert "Rock" Aldi for making us aware that a riot broke out in Los Angeles following the Lakers national championship win.
My first thought went back to Philadelphia PA after the Flyers won the Stanley Cup in May 1974. In that case in was not a riot but joy in the streets.
1. This year of 2020 of protests devolving into looting and rioting by radical leftists and anarchists from decrying police killing of thugs or hapless victims is sad to me.
2. Thankfully the destruction of statues of Confederate, Federal Civil War leaders, to Christopher Columbus, etc. was truncated after President Trump resurrected the Federal statue of 10 years in prison for toppling a statue on public grounds [retroactive] was reenacted by Federal Agents, Federal Attorneys, etc.
3. Hopefully peaceful relations between citizens and police officers in the cities of LA, Seattle and Portland will be more common after the Federal election results are accepted.

10-12-20 DTLA Riots Break Out After Lakers Win 17th Championship
The Lakers won their 17th championship Sunday evening and thousands of fans immediately began to celebrate throughout Downtown. LAPD immediately declared a civil unrest and began to order people off of the streets. Crowds began to throw rocks, bottles fireworks and whatever else they could find at officers. The celebration quickly turned into a riot and swat was deployed as well as hundreds of officers from LAPD & CHP. Officers formed skirmish lines throughout the city to prevent the crowd from going where they pleased. As the crowd grew more and more aggressive officers were forced to use less lethal options to keep themselves safe. Several officers were struck by bottles and various objects, a few were injured. Officers could be seen shooting rubber bullets at the people who were throwing bottles at the officers. At one point a metro bus was set on fire and vandalized. A bystander was reportedly shot in the head and was transported by paramedics. LAPD made dozens of arrests and towed dozens of cars throughout the night. The aftermath shows littered streets, broken windows to local businesses, graffiti covering most walls and some damaged vehicles. It is unclear how many arrests were made or what the charges will be for those individuals.
https://www.youtube.com/watch?v=EeolpcZCfps


"Despite fans being encouraged to not show up to the Staples Center to celebrate the Lakers’ win, over 1000 people did anyway. Mayor Garcetti encouraged fans to celebrate at home, but city officials said that if they do show up they should wear masks. Hundreds of fans flooded the streets to celebrate the win.
It started as a celebration of the win but quickly turned into a riot that required police officers to show up in riot gear. Officers tried to tame the crowd and get the fans to disperse and leave the area, a small number of people left but others remained and began throwing glass bottles, rocks, and other objects at the officers. According to police, a large group broke from the main group and began vandalizing businesses. Many became violent, even toward police officers."