A1C (Join to see)
569
32
17
8
8
0
This guy keeps digging a hole for himself. He also is still posting on his website, twitter and facebook his plan to kill people called "purge night" and using a navigation app to expedite the murders and as he calls it "Genocide"

His own family is pleading with him to tone things down..and he has walked back some of his statements and mentions often he truly does not want to hurt anyone, But then turns around and says he does.
Sadly, this guy is setting back veterans causes and mental health, as well as clearly GUN RIGHTS into the dark ages. His ramblings are bizaare. He also posted on Drop box his VA medical records and cites the access link via Twitter and facebook.
See: https://www.dropbox.com/s/3vl74mdn9jkxqco/5C%20Medical%20Record.pdf?dl=0
See: https://twitter.com/antiher0331?lang=en
See: https://www.facebook.com/AntiHer0331/posts/ [login to see] 512143
Among other rantings, He calls himself "Antihero" Seems to think he is Batman, Is scheduling art and painting classes for ANTIFA but still subscribes to ripping peoples throats out with his teeth but reminds people they would be safe at his art class.
-----------------------------------------------------------------
However, Kohfield penned an email to Rep. Dan Crenshaw (R-TX) months earlier that aired his frustration with the violent left-wing group. The email, titled "Savagery," did not request casework assistance or personal help, but rather detailed plans to "systematically execute every member of Antifa" unless actions are taken against them.

Accordingly, Crenshaw's office staff swiftly alerted the U.S. Capitol Police of the correspondence and, days later, the FBI conducted what would be its first interview in a series of threat assessments over the subsequent few months.

"When my office received the letter from this individual, we followed standard House protocol and shared it with U.S. Capitol Police," Crenshaw told The Daily Wire. "It would have been impossible for my office to sit idly on a threat that was this serious and imminent, regardless of the person who wrote it, their background or the weapons they may possess."

In the letter, which was obtained exclusively by The Daily Wire, Kohfield explained to Crenshaw that he had attended the #HimToo rally in downtown Portland in November 2017. The rally, which was counter-protested by hundreds of left-wing activists, erupted into chaos as protesters allegedly lit fireworks, flares, and smoke bombs, threw bottles, and sprayed pepper spray.

The bloody brawl ended in six arrests, but Kohfield contended that Antifa consistently had the upper hand, leaving what he described as no option but to escalate the situation.

"The police and mayor of Portland, Oregon were completely complicit in the savage attacks because of their policy to disarm conservatives," he wrote. "My friend and I accused the mayor of Portland of treason because he is intentionally and knowingly putting policies into effect that are causing citizens of the United States to literally be hunted like animals."

Equating Antifa's treatment of conservatives in Portland to the gore-filled fictional film "The Purge," Kohfield argued that United States Constitution allows for him to "fix the problem" if the government will not.

"I can legally declare war on Antifa," he wrote, adding that he wouldn't even be charged with manslaughter for those he killed.

Kohfield also demanded that Crenshaw pursue legislative action to designate Antifa as a terrorist organization and have Congress charge any individual who wears a mask with committing treason against the United States.

"You will handle Antifa or the veterans will," Kohfield threatened. "And veterans will hunt them like animals like they do to the citizens of the United States of America."

He went on to explain how the supposed "veterans" would compile names of Antifa members through social media forums and collect personal information through connections at the Department of Motor Vehicles (DMV).

Kohfield threatened that the group of "veterans" would then target each of the members' homes and "systematically execute every member of Antifa" until they have "achieved genocide."

Kohfield attempted to rationalize the murderous plan by claiming that there's no feasible alternative to killing since he realistically wouldn't be able to arrest all of the members of Antifa. "I'm going to let Congress do its job or I have no choice but to go door to door and kill every single one of them," he declared.

Kohfield further stated that he believed Antifa was preparing to "declare war" on him but that he is in the process of putting everything in place for when he executes his plot to retaliate.

Kohfield told Crenshaw that as a member of Congress, the freshman lawmaker was the only person he could trust with the letter, but also cautioned him against taking any action, boasting that arresting or killing him "would really kick my recruitment of veterans into overdrive."

Based on the court order, Kohfield was committed to a veterans hospital for 20 days and prohibited from participating in subsequent protests while in Portland.

Following his release, Kohfield — who had served two tours of duty in Iraq — told local press that he never intended to harm anyone, but that he understood why law enforcement was alarmed.

"I looked unhinged," Kohfield told the Oregonian. "I looked dangerous and have the training to be dangerous."

Crenshaw confirmed to The Daily Wire that his office has not received any other correspondence from Kohfield and that the Capitol Police were not aware of any other lawmakers who received messages either.

"I'm grateful every House office has a resource for threats like these so we can ensure our communities stay safe," Crenshaw added. 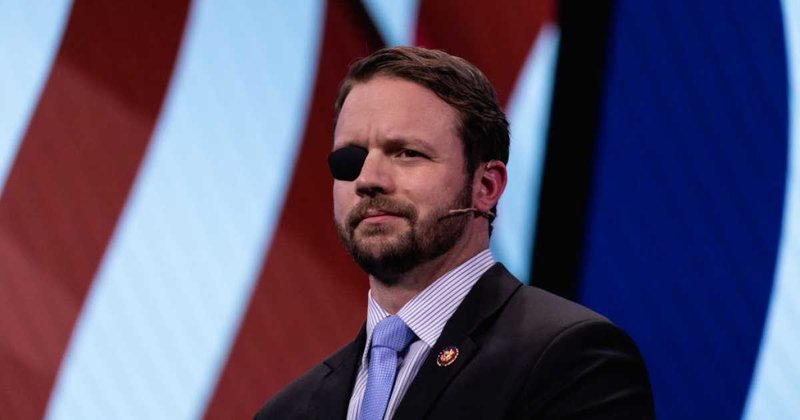 A1C (Join to see)
9 mo
Thanks for reading. Its a truly unfortunate situation. but he poked the bear.
(1)
Reply
(0)

CPT (Join to see)
9 mo
A1C Doug Towsley - I truly regret my actions and dismissive, arrogant behavior last Thursday & Friday. Even if you had been in error (which you were not), you were at least owed common courtesy. I will communicate with the bosses here and try to get the negative feedback's removed or transferred to me.
(0)
Reply
(0)

A1C (Join to see)
9 mo
No,, I detest it. The media has always been sleazy, but not all of it. Its such an important part of the checks and balances in democracy. However its really broken these days.
I know a retired Homicide detective, He often says,, "I would watch the news or read the paper and I know by the names its my case, but its virtually unrecognizable to the reality and the truth of what really happened" Often when the news comes on,, And something really crazy is being reported you can clearly tell is total BULLSHIT,, I look at my wife and say.. "I can hear Pat yelling at the TV from here!" (Pat lives about 15 miles away)
(2)
Reply
(0)

A1C (Join to see)
9 mo
PO1 H Gene Lawrence - Gotcha! Then you know what I am talking about. You might find these interviews interesting. I have met CW a few times and like him a lot, although I doubt he remembers me. He is younger than most of the PPB old school cops I know, But still one of the old guard,, when "Smoke 'em dont choke em" was still in play. I wont name names but there was some amusing T Shirts sold to members of the dept and I know a few guys who still have theirs. (one of my relatives was on the first season of Cops TV show and was kicking in a door, he still has a watch they gave out to everyone who was on the first season. Many of my neices and nephews grew up singing the song as well. Bad boys bad boys,, whatcha gonna do?)
Anyrate,, I like one of the other guys who says he got PTSD not from working the street but dealing with Bureaucracy and city govt.. But I bet you might enjoy this interview...(CW was also for many years the media liaison, and the reason they have a media liaison is Pat, who I mentioned earlier)
See: https://sites.google.com/site/theresagriffinkennedy/retired-ppb-captain-cw-jensen

In my sixth interview with law enforcement, I'd rather I didn't appear overly analytical. I will say that I found CW to be very open and direct about his experiences as a police officer and his experiences working with PPB administration.

CW worked first as a patrol officer and later in the homicide detail and also as a Captain. Working in homicide CW was responsible for breaking several very important and well known homicides including the string of child murders committed by pedophile and sociopath Westley Allen Dodd during the middle 1980's.

Though CW appeared initially reserved after we met, something I've noticed before, in my interviews with law enforcement retired and working, (who tend to be reluctant and suspicious) I noticed that in time he became more relaxed and was more natural and forthcoming about his memories, various frustrations with command staff and also his 1985 experience with lethal force; which clearly impacted him in a very profound and complex manner.

I thoroughly enjoyed this interview and was consistently amused by his dry humor and perspective. I consider this another great interview, another way for a former police officer to share intimately, in an atmosphere of respect, his thoughts, views and perspectives on a variety of complex issues that most people will never understand or experience themselves.

Thank you CW for giving us a window into your past.

This website is to share the collected writings of Theresa Griffin Kennedy, which constitutes creative non-fiction, law enforcement interviews, poetry and personal essays.

CPL Douglas Chrysler
Posted 9 mo ago
They mislead making you think Crenshaw is the bad one.
(3)
Comment
(0)

A1C (Join to see)
9 mo
I was a mandatory reporter for each of my govt service jobs and did often report. Usually someone in crisis for suicide but child abuse, rape and other cases. But If I was in Crenshaw's shoes,, I would report that material so fast it would make your head spin. It does not take a rocket scientist to figure out if that guy had popped his cork and shot up a sports arena, city street, or a Walmart and found out that the threats were documented and he had NOT reported it? He would have people wanting to mount his head on a spike for failure to alert the authorities. HE DID THE RIGHT THING and regardless of what anyone said, Sadly this ex Marine was clearly telegraphing he was well on his way to acting.
(3)
Reply
(0)
Show More Comments
Read This Next
RallyPoint Home