A1C (Join to see)
360
12
8
4
4
0
I wont say there is not racial problems, thats not the point here. In Portland many people are easily triggered by news coverage, such as the riots between Antifa and the Patriot Prayer and fringe white supremacists. But what people fail to understand is that the region has a history of protestors going back decades and currently its mostly white people doing the damage and crimes. Mostly anarchists, Some fringe ANTIFA, some opportunits but do a google images search for "Portland Oregon Black Lives Matter" (Whole lot of white folks) Now do a similar image search for Portland Oregon Occupy Wall Street, Yep, same people. Nowdays most anarchists and Antifa wear masks because its common knowledge that govt agents and police film them and create files on them as well as intel on who is who. This also includes the far right militia types, white supremacists and any other group that might end up as domestic terrorists.
-----------------------------------------------------------
Portland rioters smashed shop windows and looted downtown stores until nearly 4 am today.

The looting followed a protest of the May 25 police killing of George Floyd in Minneapolis. That demonstration turned destructive around 11 pm, when protesters set a fire inside the Multnomah County Justice Center.

Portland police used flash-bang grenades and tear gas to scatter the crowd. What followed for the next five hours was a wave of property destruction and looting unrivaled in Portland since 2016 protests of President Donald Trump's election.

The damage was confined to a relatively small geographic swath of the city: about 10 square blocks of downtown, between the Willamette River and Interstate 405.

But the damage was intense: Rioters smashed the windows of dozens of stores. They raided the shelves of a CVS Pharmacy and a locally owned cigarette shop. They snatched products from the Apple Store and sprinted up the escalators at the City Target. Some people set bonfires—including outside a pharmacy.

The looters were masked, but they appeared young and predominantly white. That was a contrast to a peaceful vigil Friday night in North Portland, where many of the protesters were black.

Yet reports on the ground noted that iconic local businesses like Powell's City of Books were left untouched.

Mayor Ted Wheeler has set a citywide curfew for 8 pm tonight. Here are photos of the looting and damage. 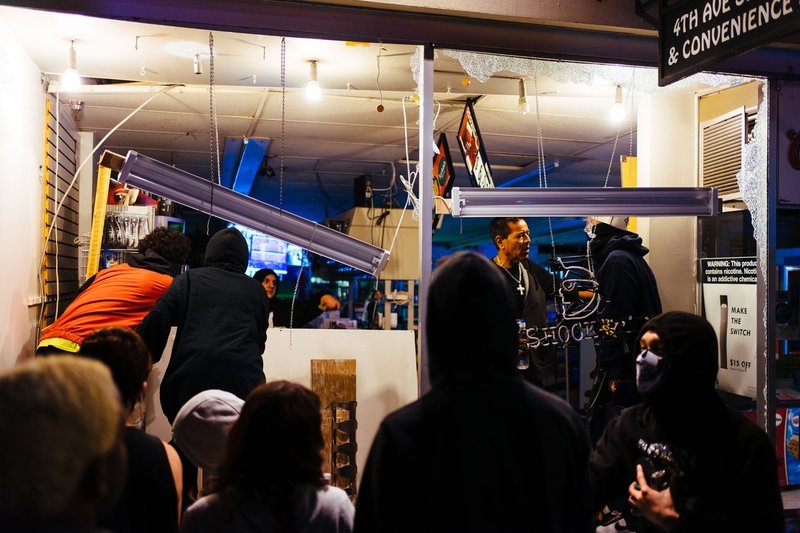 Posted from wweek.com
Posted in these groups:

A1C (Join to see)
1 mo
While thats funny, there is too damn many coffee shops and so clearly the problem is either price or brand THATS the source of the angst!
* Something to think about, Catholic church and other senior religious leaders as well as kings, queens and politicians in Europe were deathly afraid of coffee when it was introduced to Europe by traders and explorers who were bringing it back from the new world (American continent.) While tea was the drink of choice the Chocolate and Coffee elixirs were far more powerful and intoxicating and the powers that be were morbidly afraid of the population drinking it, and staying up excitedly sharing ideas and opinions that might lead to many questioning those in power or getting ideas of doing things differently. More than one revolution was plotted in coffee shops. Initially those powerful elixirs were banned and prohibited. But proved to be too popular.
https://www.history.com/news/coffee-houses-revolutions

From the Ottoman Empire to the American and French Revolutions, coffeehouses have offered a place for (sober) people to discuss new waves of thought.

SPC Mark Huddleston
Posted 1 mo ago
What a horrendous response to a horrendous catalyst. Really showed their "moral superiority" didn't they?
(2)
Comment
(0)

A1C (Join to see)
1 mo
Well rioting is so common place here its expected. Some are saying Friday nights is the worst here ever, But I expect that there will be finger pointing of political and LEO leadership failed to be proactive to a known problem. (given PDX history its expected rioting would occur) Tonights rioting was better handled. But its the anarchists criminals who caused the problems. Sadly one of the most profoundly left wing racists is actually making sense and calling out the bad actors. Her name is JoAnne Hardesty and she has been inciting riots and protests for years. But now, she is on the city council she has a delicate balancing act.
(1)
Reply
(0)

A1C (Join to see)
1 mo
Joining Wheeler at the press conference was City Commissioner Jo Ann Hardesty, the first black woman elected to Portland City Council and perhaps the city's foremost advocate of criminal justice reform. She had no such political land mines to avoid, and she did not hold back in her condemnation of looting and rioting.

After praising the peaceful protesters, she blamed a small group of people intent on destruction.

"What happened last night had nothing to do with black America; it was not about standing up for black people's rights," she says. "I want those people prosecuted. I want them found. I will help go through the video if need be."

Hardesty also notably praised the police work through the night. "As someone who is a strong, long-term critic of the police, I actually think they did an excellent job last night," she said.
She also criticized the media for focusing questions on policing of the riot. "This is about how do you heal a community that has consistently been damaged over and over and over again," she said.

A1C (Join to see)
1 mo
Politically untenable but i expect that at some point this will happen with a shop owner. It happened years ago with LA riots. In todays news many stores are closing down and calling it quits in Portland, Seattle and Eugene. Even Portlands mayor has stated he suspects that at times, Portland is ungovernable.
(0)
Reply
(0)
Read This Next
RallyPoint Home