Watch: Portland crowd boos as US Armed Forces enlistees pledge to obey the president in their... 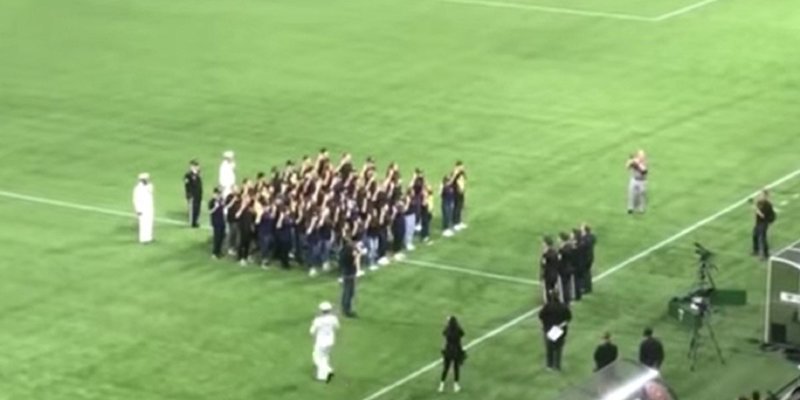 Watch: Portland crowd boos as US Armed Forces enlistees pledge to obey the president in their...

LTC Stephen F.
Edited 9 mo ago
Posted 9 mo ago
My friend Sgt Kelli Mays I listened to and watched the swearing in. The Blaze got it wrong.
1. The cheers drowned out the boos at the portion of the oath about obeys the orders of the president.
2. Similarly at the end of the oath the crowd overwhelming cheered.
I recommend you listen to the whole recording.
Obviously there were Antifa supporters in the crowd - they would boo anything to do with the military or the Federal government
FYI SGT David A. 'Cowboy' Groth CPL Dave Hoover SSgt Dee O'Connor

A1C (Join to see)
9 mo
Meh,, you are right, but typically so many here are easily triggered by blatant by news reports and then respond based on their perceptions, Not facts. So people read into it what they want. Lenin called people like that "Useful idiots"
(2)
Reply
(0)

A1C (Join to see)
9 mo
LTC Stephen F. Revisiting this, And Lt Col Charlie Brown identical post, First I want to thank you for pointing out the obvious. You are one of the few people here who actually watched/listened and spoke out that its not what it seems or as labeled. Seems like a perfect example of "FAKE NEWS". What I find truly disheartening is the mob mentality of reactionary responses without bothering to figure out whats true. What REALLY depresses me is that once again we have election season coming up, And things got super ugly here on RP with name calling, insults and some very disappointing behavior from adults who by all means are educated and seasoned with worldly experiences but are making some very bad mistakes. What kind of future do we have if veterans cant be trusted to make rational decisions? And yet,, despite that, then VOTE in a election?
Im sorry, but its depressing. Anyone have any ideas? Suggestions? Or have we all collectively lost our minds?
Do we need to sever peoples internet connections, take away sharp objects and weapons because so many lack critical decision making and so easily triggered by a reactionary and untrue headline?
I realize nobody would be sharing, clicking on, upvoting or commenting on a headline,,
"PORTLAND Ore Crowd cheers wildly young men and women taking the oath of military service on 9/11, although a few jeers and boos (Minority) when the president is mentioned."
Now,, these SAME people would be reacting differently if it was Obama?
Should we downvote fake news? Block those who post fake news without an attempt to vet their sources? Suspend accts? FarceBook has taken some steps to address the fake news issues, maybe its time to address the same here?

SGT David A. 'Cowboy' Groth
Posted 9 mo ago
The crowd can go soak their heads in the local cesspool( but that might contaminate the cesspool).
(4)
Comment
(0)
Show More Comments
Read This Next
RallyPoint Home