WEST POINT, N.Y. – In the ninth-longest game in NCAA Ice Hockey history, Colin Bilek scored his 18th of the season in the third overtime to send the Army West Point hockey team to the Atlantic Hockey Semifinals with a 4-3 win over Sacred Heart.

It was also the longest game in Atlantic Hockey history and longest in Army’s history. With the win, the Black Knights now have the longest unbeaten since the 1983-84 season when they won 16 games in a row under head coach Jack Riley. The Black Knights are unbeaten in their last 13 games.

Bilek extended his goal-scoring streak to seven games with the winner and Trevin Kozlowski was a brick wall all night with a career high 42 saves between the pipes.

“We got down two goals, but we had been there before,” head coach Brian Riley said. “We tied it up and then we went down and then Thomas Farrell scored a big goal for us. It was an unbelievable battle and wouldn’t you figure that Colin Bilek scores the winning goal.”

Bilek scored the gamewinner with 6:40 on the clock in the third overtime. He redirected the puck with his skate on a feed by Mitch Machlitt and the puck found its way past John Benson, who played an incredible game for Sacred Heart with 68 saves.

“Everybody wanted to score that one,” Bilek said after his tally in the third overtime. “Luckily it just went off my skate and in, so we are going to take them anyway they come, but kind of happy the game is just over.“

Army got to that position thanks to Farrell’s goal in third period to tie the score at 3-3. With 7:39 left in regulation with Farrell firing the puck into the back of the net from the slot. Machlitt avoided a sprawling defender and put the puck on a silver platter for Farrell and he beat Benson to tie the game at 3-3 to force overtime.

The Pioneers took their first lead of the series late in the first period with Braedan Tuck chipping the puck over a sprawling Kozlowski on the power play. Sacred Heart took the 2-0 advantage on the power play again early in the second period with Austin Magera finding the back of the net from the slot on a feed from Marc Johnstone.

The Black Knights got one back on the power play as well with Eric Butte redirecting a shot in front of Benson to cut the Pioneers lead to 2-1. Daniel Haider worked the puck off the boards and slid it over to Lincoln Hatten at the point and he put the puck on net for Butte to tip in.

Army knotted the score with 3:27 remaining in the second with a strong goal from Mason Krueger on the break. Bilek fed him the puck after crossing the blueline and right before he was about to be checked, Krueger pushed the wrister past Benson to tie the game at 2-2.

Patrick Dawson put the Pioneers back on top less than two minutes later with a perfect shot off the post and in to give the visitors the 3-2 lead into the second intermission.

Army outshot Sacred Heart, 38-16, in the three overtimes and had the lone power play chance.

The Black Knights will await their opponent for the semifinals as Niagara forced a game three against Robert Morris, which will be played on Sunday evening.

Army is head back to the Atlantic Hockey Semifinals for the first time since the 2017 Atlantic Hockey Tournament.
Army is unbeaten in its last 13 games with an 12-0-1 record and the fourth win in overtime during the streak.
The Black Knights have won their last four overtime games.
Army is now 8-0-0 when scoring four or more goals in a game this season.
Kozlowski is now unbeaten in his last 15 starts.
He was the first goalie to have over 40 saves in a game since Cole Bruns in 2018 against Niagara.
Bilek is second in the nation in goals with 18 on the season.
He extended his point streak to 13 games and has at least a point in 17 of his last 18 appearances on the ice.
Army won for the second time this season when trailing after two periods.
The top line of Machlitt, Krueger and Bilek combined for two goals and five assists.
The last time the Black Knights had over 70 shots on net was against Scranton in 1996. 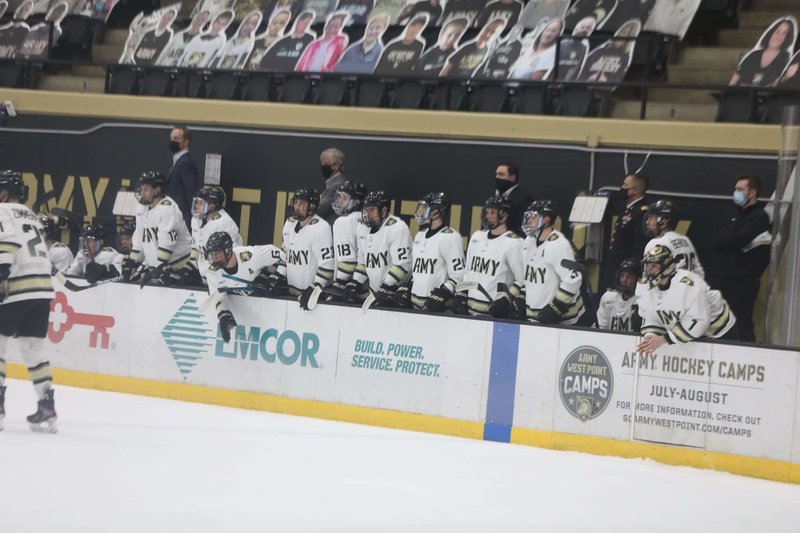 Posted from facebook.com
Posted in these groups:

SSG Samuel Kermon
Posted 5 mo ago
Great. Course, I didn't know there was a hockey team at the Point.
(1)
Comment
(0)