If my mother is my dependent do I get BAH at her zip code or my duty station zip code?

What happens to my family during EOD Phase1?

Why don't all members of the Air Force have to be fully qualified to be a rifleman in case of hostile events?

Can an officer get reduced in rank and still be allowed to stay on active duty?

More than 70 West Point cadets accused of cheating on exam

Back in the day, an Italian Communist by the name of Antonio Gramsci posited that a successful revolution could be effected without a viol...

With Air Force's 40-7 win over Navy on October 3rd, if the Falcons win Saturday, they will win the coveted Commander In Chief Trophy out right. If Army wins, the Dec. 12th Army-Navy Game to be played at Michie Stadium will provide the Black Knights an opportunity to win the Trophy outright for third time in four years. If all three teams win one game in the competition, Navy will maintain procession of the Trophy based on winning outright in 2019.

Facebook Live coverage of warmups by SALRadio here starting at 11:15 AM.

SALRadio asks coach Monken about the Air Force offense and defense, and perspective of playing a team which has played three games while Army has played seven.

"I guess we haven't been here since the game two weekends ago and it was a great win for our guys, I thought they played really hard and performed well. I'm just pleased with the takeaways we got and our defense and how they continue to play and the production on offense. We're playing a lot of guys that don't really have a lot of game experience in some skilled positions, particularly the quarterback position. I'm really excited to see them get some game experience and build the reps that they frankly haven't had in practice. I thought they did a nice job. Our kicking game was really good that last time out. We covered kicks well, had a blocked kick and those are always big, and I'm just really impressed with the job that Coach (Sean) Saturnio is doing in motivating those guys to play really hard.

“Obviously, this week is a big game for us. We haven't had a bigger game this year than the one we're going to play this weekend. I know our guys are excited for the opportunity and certainly what's at stake when we play the academy games to earn the Commander-in-Chief’s Trophy. It's always a great game and always a tremendous battle and hopefully we'll play well enough this Saturday that we can make it a battle again."

(Ref.: On Air Force’s offense)
“I think they had 415 yards of rushing last week. Is that right? Just crazy numbers against Boise State. They held the ball for 37 minutes, just some pretty impressive stats. Boise is a good football team and they had some big plays and were able to get the victory, but Air Force has some experienced players. Their guys up front are impressive and big as you mentioned. They’ve got (Timothy) Jackson, (Kadin) Remsberg with a lot of touches on the ball. They have players that have been in the games and have been a big part of their success. There are other guys that roll in and find themselves in starting positions like (Haaziq) Daniels at quarterback, (Warren) Bryan last week at quarterback. Those guys being able to share snaps last week. I know Daniels went out, but I thought Bryan went out and did a good job running their offense. They have a lot of people in each of their positions that have built depth as well. I am impressed with their offense and what they’ve been able to do this year. Being able to slide guys in there when some guys we’ve mentioned already have gotten hurt. They continue in the game and do what they need to do to gain yards and move the ball.”

(Ref.: On the Air Force defense)
“Their guys have done a very good job of defending the option. Every time we play them you have to earn every first down and every point. Last year we had the ball in scoring position several times, but just couldn’t get it into the endzone. We had some opportunities but didn’t score and I think that speaks to their ability as a defense and what they do schematically. What is impressive about the guys they have this year is that they have moved positions. (George) Silvanic, as I understand it, was an offensive linemen who moved over there. They’ve got some guys who are playing for the first time and are having production. That’s what happens. It is kind of like the quarterbacks we are playing with right now. They don’t have much experience, but they have their opportunity and take advantage of it. They practice and are preparing and so they’ll present a lot of challenges for us as they always do. Hopefully we will be able to execute well enough to block them and move the ball ourselves.”

Thank to Army Athletics for providing this video. 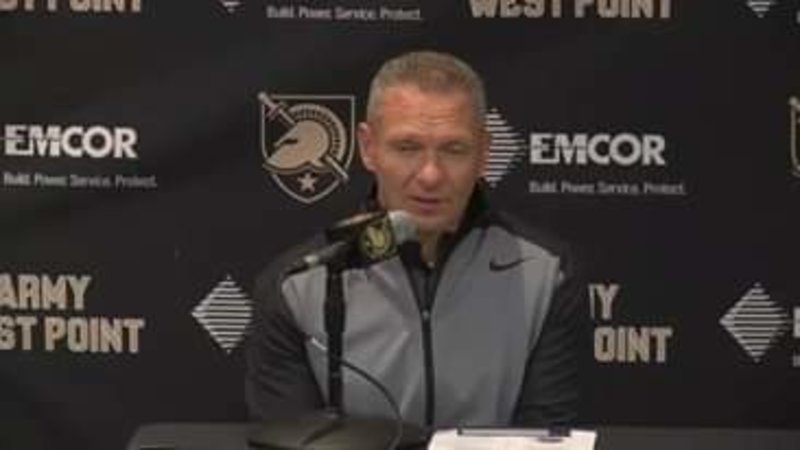 Posted from facebook.com
Posted in these groups: 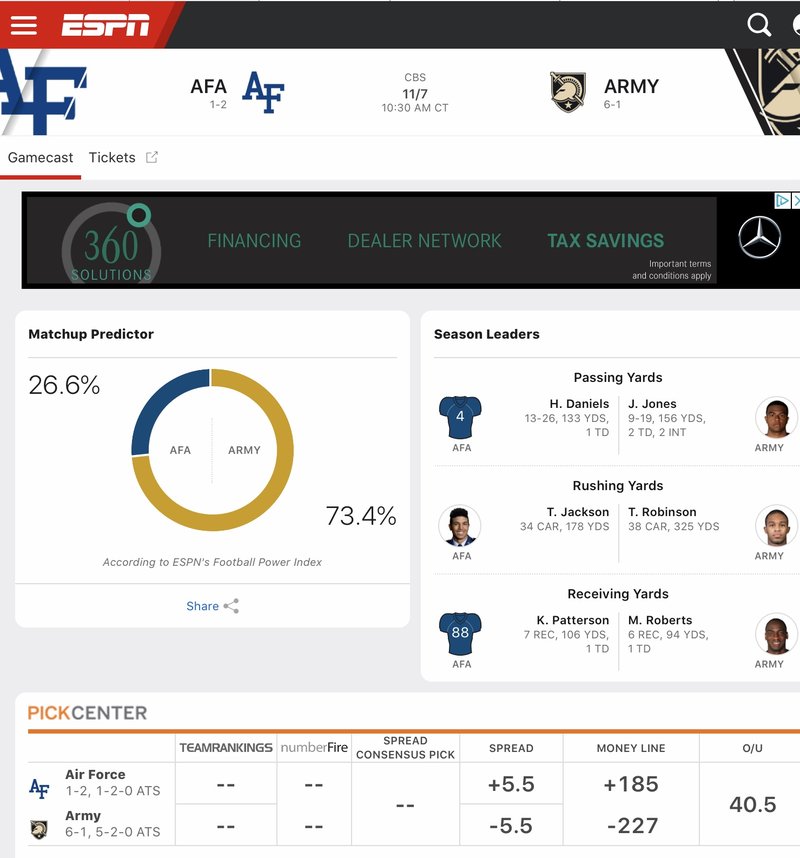 These numbers indicate that Army should beat Air Force, Ken Kraetzer. They’re favored by 5.5 points and ESPN’s Football Power Index gives Army a 73.4% chance of winning. My only concern is that three of Army’s six wins are from I-AA schools and Air Force is a real football team, despite their unenviable record.
I predict (and hope) Army will win, but I also hope Army is done with FCS schools.
SSG Michael Noll TSgt Cinthia W.
(2)
Comment
(0)

Ken Kraetzer
3 mo
Yes remember Army had 9 games canceled and had to fine a new schedule. Then BYU canceled.

Except for Citadel Army dominated those games. The many young players have benefited from 4th quarter playing time.