Born in Houston, Baker attended The Hill School and Princeton University before serving in the United States Marine Corps. After graduating from the University of Texas School of Law, he pursued a legal career. He became a close friend of George H. W. Bush and worked for Bush's unsuccessful 1970 campaign for the United States Senate. After the campaign, he served in various positions for President Richard Nixon. In 1975, he was appointed Undersecretary of Commerce for Gerald Ford. He served until May 1976, ran Ford's 1976 presidential campaign, and unsuccessfully sought election as the Attorney General of Texas.

Baker ran Bush's unsuccessful campaign for the 1980 Republican presidential nomination, but made a favorable impression on the Republican nominee, Ronald Reagan. Reagan appointed Baker as his White House Chief of Staff, and Baker remained in that position until 1985, when he became the Secretary of the Treasury. As Treasury Secretary, he arranged the Plaza Accord and the Baker Plan. He resigned as Treasury Secretary to manage Bush's successful 1988 campaign for president. After the election, Bush appointed Baker to the position of Secretary of State. As Secretary of State, he helped oversee U.S. foreign policy during the end of the Cold War and dissolution of the Soviet Union, as well as during the Gulf War. After the Gulf War, Baker served another stint as White House Chief of Staff from 1992 to 1993.

Baker remained active in business and public affairs after Bush's defeat in the 1992 presidential election. He served as a United Nations envoy to Western Sahara and as a consultant to Enron. During the Florida recount following the 2000 Presidential election, he managed George W. Bush's legal team in the state. He served as the co-chairman of the Iraq Study Group, which Congress formed to study Iraq and the Iraq War. He serves on the World Justice Project and the Climate Leadership Council. Baker is the namesake of the James A. Baker III Institute for Public Policy at Rice University.[2] 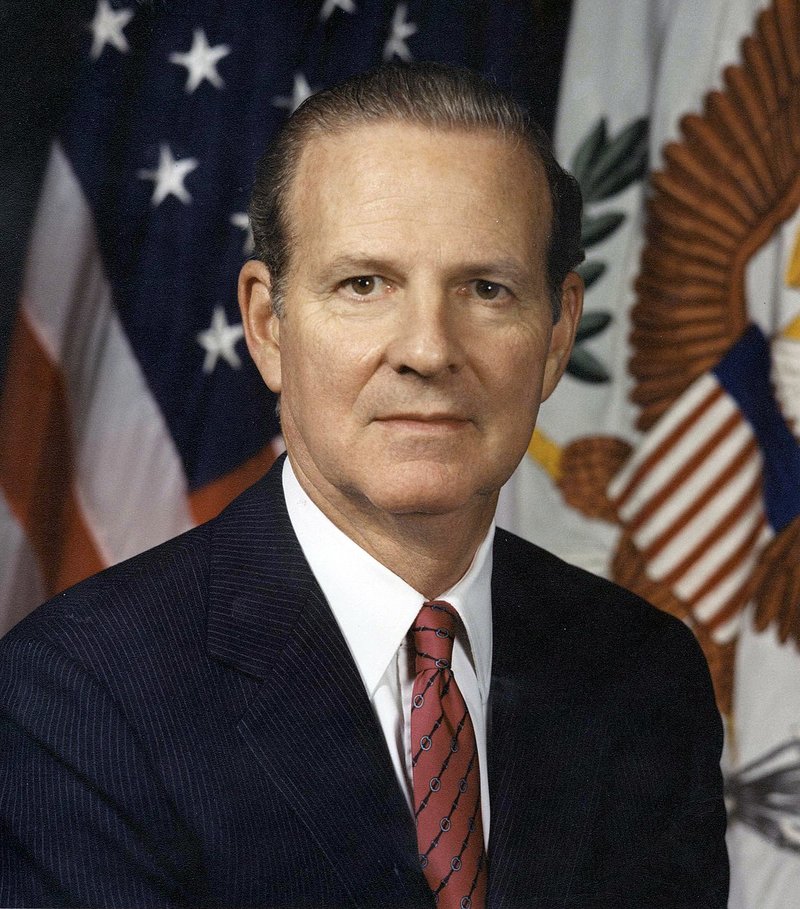 Chief of StaffUS Department of the Treasury
Edited 1 mo ago
Posted 10 mo ago
Responses: 8

Thank you, my friend Capt Marty Hogan for making us aware that April 20, is the anniversary of the birth of Lieutenant in the USMC; attorney with the Houston firm of Andrews and Kurth from 1957 to 1975; served from 1981 to 1985 as White House chief of staff to President Reagan served as the 67th secretary of the treasury from 1985 to 1988 under President Ronald Reagan; James Addison Baker III and he served as the nation's 61st secretary of state from January 1989 through August 1992 under President George H.W. Bush.
Happy 89th birthday James Addison Baker III

Background from bakerinstitute.org/honorary-chair-james-a-baker/
"A VISION FOR THE BAKER INSTITUTE
... A bridge between the world of ideas and the world of action ...
Together, I believe we are building the James A. Baker III Institute for Public Policy into a nationally recognized center — one that will draw statesmen, scholars and students from around the world into its innovative and integrated activities.
My vision for the institute is simple: to build a bridge between the world of ideas and the world of action.
In my view, we need to work more diligently at nurturing the ties between these two worlds.
In the pursuit of truth, scholars often neglect the hard, worldly realities that impinge on ideal solutions and the day-to-day requirements that drive or constrain the statesman's options. And in their pursuit of the public good through power, statesmen often are disdainful of the world of ideas, closing out all outside advice and living in a cloistered world of their own making.
The institute, in short, should bridge these two worlds. Scholars should learn firsthand from statesmen of the practical imperatives that impact policy, oftentimes making "the perfect" the enemy of "the good." Statesmen and policymakers should hear from scholars rigorous, logical — (and always practical) — analyses of how to improve the work they do. And students, the next generation of scholars and statesmen, should be enriched through participation in this dialogue and go on to become better scholars and statesmen as a result.
James A. Baker, III
Honorary Chair


BIOGRAPHY
Baker was born in Houston, Texas, in [April 20,] 1930. He and his wife, the former Susan Garrett, currently reside in Houston and have eight children and 17 grandchildren.
James A. Baker, III, has served in senior government positions under three United States presidents. He served as the nation's 61st secretary of state from January 1989 through August 1992 under President George H.W. Bush. During his tenure at the State Department, Baker traveled to 90 foreign countries as the United States confronted the unprecedented challenges and opportunities of the post–Cold War era. Baker’s reflections on those years of revolution, war and peace — “The Politics of Diplomacy” — was published in 1995.

Long active in American presidential politics, Baker led presidential campaigns for Presidents Ford, Reagan and Bush over the course of five consecutive presidential elections from 1976 to 1992.

A native Houstonian, Baker graduated from Princeton University in 1952. After two years of active duty as a lieutenant in the United States Marine Corps, he entered The University of Texas School of Law at Austin. He received his J.D. with honors in 1957 and practiced law with the Houston firm of Andrews and Kurth from 1957 to 1975.

Baker’s memoir — “Work Hard, Study . . . and Keep Out of Politics! Adventures and Lessons from an Unexpected Public Life” — was published in October 2006.

Baker received the Presidential Medal of Freedom in 1991 and has been the recipient of many other awards for distinguished public service, including Princeton University's Woodrow Wilson Award, the American Institute for Public Service's Jefferson Award, Harvard University's John F. Kennedy School of Government Award, The Hans J. Morgenthau Award, The George F. Kennan Award, the Department of the Treasury's Alexander Hamilton Award, the Department of State's Distinguished Service Award and numerous honorary academic degrees.

Baker is presently a senior partner in the law firm of Baker Botts. He is the honorary chairman of the James A. Baker III Institute for Public Policy at Rice University and serves on the board of the Howard Hughes Medical Institute. From 1997 to 2004, Baker served as the personal envoy of United Nations Secretary-General Kofi Annan to seek a political solution to the conflict over Western Sahara. In 2003, Baker was appointed special presidential envoy for President George W. Bush on the issue of Iraqi debt. In 2005, he was co-chair, with former President Jimmy Carter, of the Federal Commission on Election Reform. Since March 2006, Baker and former U.S. Congressman Lee H. Hamilton have served as the co-chairs of the Iraq Study Group, a bipartisan blue-ribbon panel examining a forward-looking approach to Iraq.

PUBLICATIONS AND REPORTS
Iraq Study Group Report
The Baker Institute is one of several think tanks that were an integral part of the Iraq Study Group Report, a congressionally mandated, bipartisan effort to take a fresh look at the current and prospective situation on the ground in Iraq, its impact on the surrounding region and the consequences for U.S. interests. The group, appointed in March 2006, was led by former Secretary of State James A. Baker, III, and former U.S. Congressman Lee H. Hamilton, then director of the Woodrow Wilson International Center for Scholars.

National War Commission Report
The National War Powers Commission, co-chaired by former Secretaries of State James A. Baker, III, and Warren Christopher, recommended in July 2008 that Congress repeal the War Powers Resolution of 1973 and substitute a new statute that would provide for more meaningful consultation between the president and Congress on matters of war.

Ratify the START Treaty
James A. Baker, III, joined President Barack Obama and Vice President Joseph Biden, as well as current and former officials from both sides of the aisle, to push for Senate ratification of the New START treaty in 2010.