Capt Marty Hogan
3.5K
125
13
36
36
0
General of the Army Omar Nelson Bradley (February 12, 1893 – April 8, 1981), nicknamed Brad, was a highly distinguished senior officer of the United States Army during and after World War II. Bradley was the first Chairman of the Joint Chiefs of Staff and oversaw the U.S. military's policy-making in the Korean War.

Born in Randolph County, Missouri, Bradley worked as a boilermaker before entering the United States Military Academy in West Point. He graduated from the academy in 1915 alongside Dwight D. Eisenhower as part of "the class the stars fell on." During World War I, Bradley guarded copper mines in Montana. After the war, Bradley taught at West Point and served in other roles before taking a position at the War Department under General George Marshall. In 1941, Bradley became commander of the United States Army Infantry School.

After the U.S. entrance into World War II, Bradley oversaw the transformation of the 82nd Infantry Division into the first American airborne division. He received his first front-line command in Operation Torch, serving under General George S. Patton in North Africa. After Patton was reassigned, Bradley commanded II Corpsin the Tunisia Campaign and the Allied invasion of Sicily. He commanded the First United States Army during the Invasion of Normandy. After the breakout from Normandy, he took command of the Twelfth United States Army Group, which ultimately comprised forty-three divisions and 1.3 million men, the largest body of American soldiers ever to serve under a single field commander.

After the war, Bradley headed the Veterans Administration. He became Army Chief of Staff in 1948 and Chairman of the Joint Chiefs of Staff in 1949. In 1950, Bradley was promoted to the rank of General of the Army, becoming the last of only nine people to be promoted to five-star rank in the United States Armed Forces. He was the senior military commander at the start of the Korean War, and supported President Harry S. Truman's wartime policy of containment. He was instrumental in persuading Truman to dismiss General Douglas MacArthur in 1951 after MacArthur resisted administration attempts to scale back the war's strategic objectives. Bradley left active duty in 1953 but continued to serve in public and business roles until his death in 1981. 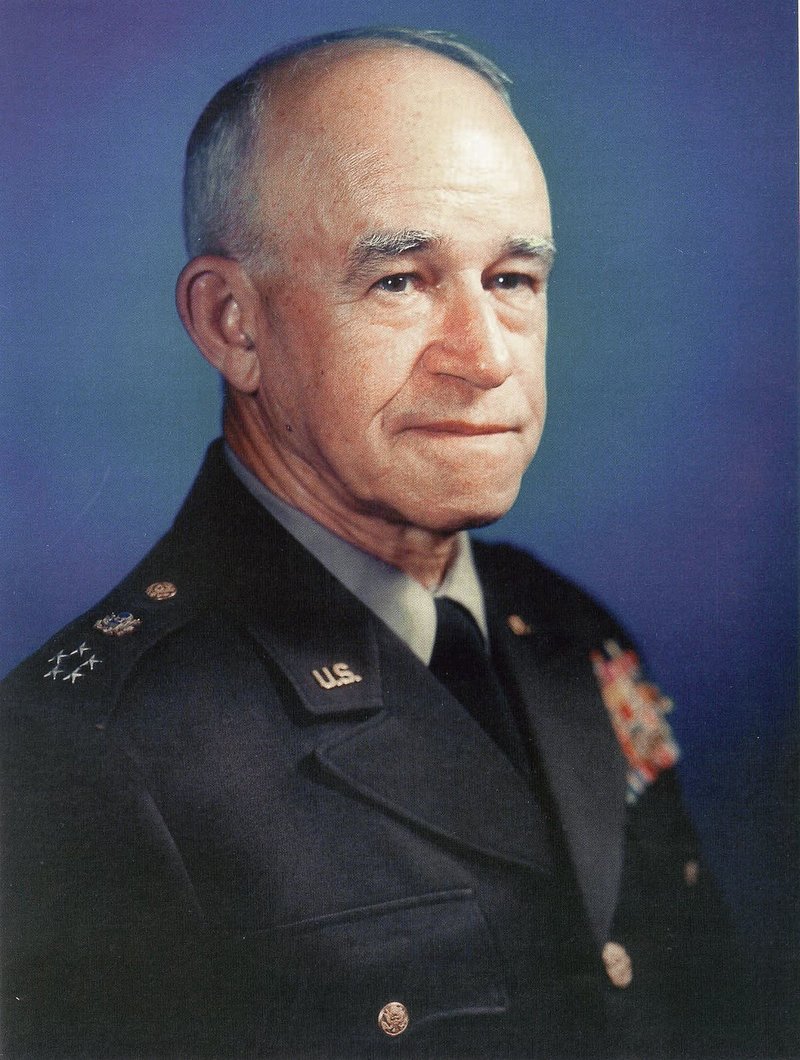 Thanks Capt Marty Hogan for letting us know that February 12 is the anniversary of the birth of General of the Army Omar Nelson Bradley who was nicknamed Brad, was a highly distinguished senior officer of the United States Army during and after World War II. Bradley was the first Chairman of the Joint Chiefs of Staff and oversaw the U.S. military's policy-making in the Korean War.

He graduated in the USMA class of 1915 as graduate number 5,356. The Class of 1915 was "comprised some of the most famous names in the history of the U.S. Army, including Dwight Eisenhower and Omar Bradley. There were 164 graduates that year and over one third, 59 total, went on to become generals, spawning the nickname 'The Class the Stars Fell On.”
In 1978 while I was a USMA cadet, I had the privilege to march in the pass in review in honor of General of the Army Omar Bradley. He sat in a wheelchair with a west Point black, gold and gray blanket over his shoulders. He was aged but his eyes shone as he watched us pass in front of him. I expect he remembered his days as a cadet in early 1900's [1911-1915]
Rest in eternal peace Omar Bradley.
The story of one of the greatest military leaders of the WW2 Generation - General Omar Bradley of the US Army Allied Forces. Narrated by Walter Matthau
https://www.youtube.com/watch?v=bxSQH0OqHqw

Introduction historicmissourians.shsmo.org/historicmissourians/name/b/bradley/
Omar Nelson Bradley was one of America’s greatest generals. He commanded the largest American force ever united under one man’s leadership during World War II. Afterwards, General Bradley became the first chairman of the Joint Chiefs of Staff. He served as a five-star general and had the longest military service in U.S. history.

Early Years
Omar Nelson Bradley was born on February 12, 1893, near Clark, Randolph County, Missouri. He was the first child born to John and Sarah Hubbard Bradley. Omar had a younger brother named John who died at the age of two. Omar’s father was a teacher who sometimes walked six miles to work. Omar was just fourteen when his father died of pneumonia. He later said that his father inspired him to be reliable, modest, and responsible.
Omar Bradley at age seventeen pictured in the Moberly High School yearbook of 1910Bradley at 17
Shortly after John Bradley’s death, Sarah Bradley moved to Moberly where Omar attended high school. She rented rooms to boarders and became a professional seamstress. Omar worked at odd jobs to help with the bills. At school he was a good student and athlete. During that time, Omar met Mary Quayle, whom he eventually married. They both graduated from Moberly High School in 1910.


Becoming an Army Officer
Bradley as a West Point cadet
Following high school, Omar Bradley went to work. His plan was to save enough money to attend the University of Missouri in Columbia. One day John Cruson, the local Sunday school superintendent, suggested that he apply to the United States Military Academy (West Point). In the summer of 1911, Bradley took the exam in St. Louis. He earned the region’s top score and was invited to attend the Academy.

U.S. Military Academy at West Point, New York
Military life at West Point is demanding. Cadets must take difficult classes and live up to a strict code of conduct. Bradley later stated that his Missouri upbringing prepared him for these challenges. As a student he ranked 44th in a class of 164 and lettered in both football and baseball. Many of his classmates would become important leaders. One of them was Dwight Eisenhower, another outstanding general and a future president.

Many Years of Work
For about twenty-five years, Omar Bradley was a little-known officer in a small peace time army. He and Mary Quayle wed in Columbia, Missouri, in 1916. Like most military families, they moved quite often. Their one child, Elizabeth, was born in 1923. Bradley served in many different ways during those years. During World War I, while other soldiers gained experience in France, Bradley was sent to Montana to guard valuable copper mines. Afterwards, he taught at colleges and attended army advanced training schools at Fort Benning and Fort Leavenworth. Bradley rose in rank and trained troops. He learned the fundamentals of command and military organization during these noncombat years. With strong leadership and strategic skills in hand, Bradley was prepared to face the great challenges that lay ahead.
The threat of warThe Threat of War
World events brought rapid change for Bradley. By 1940 another world war seemed likely. The army hurried to get ready. Bradley was named the commander of the Infantry School at Fort Benning, Georgia. During these months, he created a school to train new officers. It was so successful that it was copied throughout the army.

World War II
Soldiers scouting the Kasserine Pass in North Africa in 1943Kasserine Pass
The first major campaign in which the U.S. Army fought was in North Africa in early 1943. The inexperienced American II Corps was defeated at the Kasserine Pass by the Germans. Many were worried. General Eisenhower, the American commander, sent for Omar Bradley. “Brad,” as he was known in the army, was ordered to study the situation and make changes. When the II Corps next went into battle, it drove the Germans back and captured 40,000 soldiers. General Bradley then served in the successful invasion of Sicily. The army was learning to fight well, and Bradley was one of the main reasons for it.

After Sicily, Bradley was appointed to one of the most important jobs of the war. He would be the field commander of American soldiers on June 6, 1944, also known as "D-Day." The successful attack allowed the Allies to move directly against the German army in France. Within a year, Bradley’s forces were the first to invade Germany and were in control of much of that country when the war ended in May 1945.

Postwar Service
As World War II ended, President Harry S. Truman asked General Bradley to lead the Veterans Administration. The VA was set up to provide help to the millions of veterans who had fought in the war. Bradley’s leadership skill and his reputation as the “Soldier’s General” made him an excellent choice. He served the VA until he was asked to take over another big job in 1948, the chief of staff. That is when he became the highest-ranking soldier in the army. The next year he became the first ever Chairman of the Joint Chiefs of Staff. In 1950, Congress appointed him General of the Army with five stars. In all of U.S. history only two soldiers, George Washington and John Pershing, have held higher rank.
At the age of sixty in 1953, Bradley retired. For about fifteen years, he was the chairman of the Bulova Watch Company. In 1965, Mary, his wife of almost fifty years, died of leukemia. He married Esther “Kitty” Buhler on September 12, 1966. Over the next several years, Bradley helped with the major film, Patton, and worked on an autobiography published after his death. Omar Bradley died of heart failure on April 8, 1981. He was buried with honors at Arlington National Cemetery.

Legacy
General Omar Bradley General Omar Bradley
Because of his keen abilities to organize and lead, Omar Bradley became one of the most accomplished generals in the history of the United States Army. He defeated powerful enemy armies and earned a reputation for paying exceptional attention to the care of soldiers serving under him. He received widespread praise and was highly decorated during his lifetime. He remains a respected military figure today.

References and Resources
For more information about Omar Nelson Bradley's life and career, see the following resources:
Society Resources
The following is a selected list of books, articles, and manuscripts about Omar Nelson Bradley in the research centers of The State Historical Society of Missouri. The Society’s call numbers follow the citations in brackets. All links will open in a new tab.

SSG Robert "Rob" Wentworth
9 mo
One of the most accomplished Military Officers of his Century.
Ike had several times called upon him for assistance. He seemed to be “The Fix-It General” of his time, and was rewarded proudly with his command at D-Day for same.
His Biographies are tremendous ...
(3)
Reply
(0)

COL Mikel J. Burroughs
Posted >1 y ago
These GO's had to be great during their time, wihtout a doubt Capt Marty Hogan
(11)
Comment
(0)

SGT John " Mac " McConnell
Posted >1 y ago
He attended our graduation from the School of Infantry 1978. Thanks for sharing.
(11)
Comment
(0)
Show More Comments
Read This Next
RallyPoint Home