Is combat required to be called a Combat medic?

SGT Edward Wilcox
50.8K
415
217
24
24
0
When I was in Germany in the early '80s, a fellow medic wrote on a form "Combat Medic" for his MOS. When our Platoon Sargent(a Vietnam veteran) saw that, he made the private change it, and told him that he has never seen combat, and therefore, is not a "Combat Medic". So, does one have to have seen actual combat to take the title Combat Medic, or Combat Engineer or anything else you can put 'Combat' in front of? Or is it enough to simply have served in a combat zone?
Posted in these groups:

SSG Justin C.
Posted >1 y ago
As someone who deployed and saw combat as a medic I have no problems with anyone who holds this MOS to refer to themselves as a combat medic. When a medic is trained they first learn civilian EMT skills that allow them to work in a multitude of health care environments. The second phase of their AIT training is learning how to take those newly acquired skills and transition them into the combat environment while also adding on advanced skills beyond the scope of their EMT training. Which is why the MOS is called Healthcare Specialist (combat medic). Theoretically this allows the medic to work in any environment. Now are all medics suited to serve in combat? No. But the same thing can be said about an infantryman who is unable to cut it. But he is still referred to as an infantryman. I know there is a sense of pride that comes with having experienced combat. But having the opportunity to experience combat only means you were unlucky enough to have had the enemy shoot at you.
(39)
Comment
(0)
show previous comments

SGT Tom Middleton
>1 y
If you emphasize the word "combat" in your title when in a group of combat veterans and you're the only one who has not seen combat, you might sound like a knucklehead.

That said, as time marches forward and combat (hopefully) becomes less common, the young medics of today and tomorrow are less and less likely to work alongside CMB/CIB/CAB wearing soldiers in their units. Picture a line infantry unit at some point in the future in which everyone is young, and no one has seen combat. In such a group, it would not likely offend anyone if you used the term "combat medic" rather than "healthcare specialist". Using the word "combat" at that point might even help ingratiate you with your soldiers if it helps them discern that you have internal fortitude and will be there for them when they need you. The real way to ingratiate yourself, though, is to suffer right alongside them, and to show them rather than tell them what you are made of.

I'm retired and too far removed from current regs to speak authoritatively on what is or isn't technically authorized by Army reg today. I'll leave that to other NCO's who are currently up on that stuff.

I can only speak from the perspective of an old Doc who has seen my fair share of combat and also has a lot of experience with interpersonal dynamics in a variety of settings, military and civilian. (I also retired from the civilian career fire service after 20 years of fire and EMS in the streets).

Professionalism is all about being humble when appropriate, letting your accomplishments speak for themselves when necessary, and building up the soldier (or young firefighter / EMT) of tomorrow to keep our nation safe as we old soldiers slowly fade away.

As a medic, you've got some challenges. First of all, you've got to be physically and mentally tough enough to hold up under terrible circumstances. You don't get to wait idly by (as civilian EMS providers are required to do) and wait for the local police to make sure the scene is safe for you to approach.

You've also got to be able to shoot, move and communicate as well as the soldiers beside you. As a combat medic, your scene gets safe when you and your soldiers make it safe. You've got to be a total bad-ass when the situation calls for it.

On the other hand, you also have to be able to put yourself in the other person's shoes and empathize with the patients you treat. Empathy is not a trait generally associated with or encouraged among Infantry soldiers, but it is a huge part of being an NCO.

So my advice is this; use your head. It's the best weapon God gave you, second only to your heart.

If you've got balls of steel, a fire in your belly, a warm heart and a clear head, then you just then you just may have what it takes to be a combat medic.
(5)
Reply
(0)

We'll take whatever title you give us. Even if we hate it, we didn't enlist for the title.
(37)
Comment
(0) 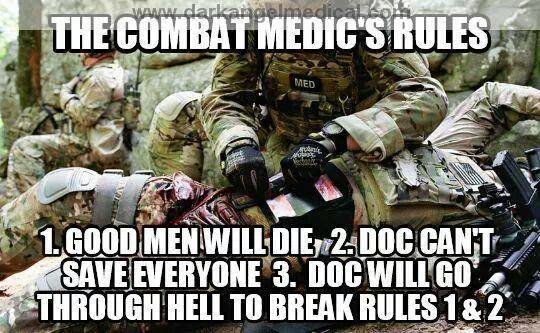 SGT Jeffrey Dennis
Posted >1 y ago
Negative. There is no combat requirement to be a combat medic, or combat engineer. The day you graduate from the US Army's Combat Medic School, You are a Combat Medic. You must have seen combat to wear the Combat Medical Badge.
(26)
Comment
(0)
show previous comments

SP5 Peter Keane
3 y
There is no Army Combat Medic school. They came to their senses and went back to HCS name as the other cheapened and diluted what had come before.
(1)
Reply
(0)

SPC Fred Taber
2 y
For a very long time the MOS was 91B Combat Medical Specialist. If you passed you were a combat medical specialist regardless of where you served. The new designation is 68W Health Care Specialist. You get the same badge for going to combat. I was a 91Bravo Combat Medical Specialist that went to Dessert Storm. But I have no issue with anyone that is a medic then or now that did not go to combat calling themselves a combat medic as that is what they were trained for.
(4)
Reply
(0)

PFC Robert Tate
8 mo
Agreed. When i was in the MOS was called 91B Combat Medical Specialist and was one of 2 MOS (Engineer being the other) w\here Combat was part of the MOS title regardless of every actually seeing combat. We were not trained as EMT's (although I wish we would have been). We were trained for one thing and one thing only....being a life safer in a situation where others are taking lives.. I myself am a product of the Cold War.....basically not seeing any combat. But that does not mean that I do not consider myself a Combat Medic. Combat Vet? No, but Combat Medic? Yes.

Now, with all of this stated, I do feel that the new medics, the 68W's, are far better trained (both for combat and civilian life after) than we 91B's ever wore but that does not make us any less a Combat Medic.
(1)
Reply
(0)

SPC Fred Taber
1 mo
And Actually.... if you pull up the MOS for 68 Whiskey it is now defined as "Combat Medical Specialist" once again. Even on this forum it states 68 Whiskey-Health Care Specialist (Combat Medic). Because that is what you are being trained for. Doesn't matter if you end up in an aid station, hospital or field unit.
(0)
Reply
(0)
Show More Comments
Read This Next
RallyPoint Home