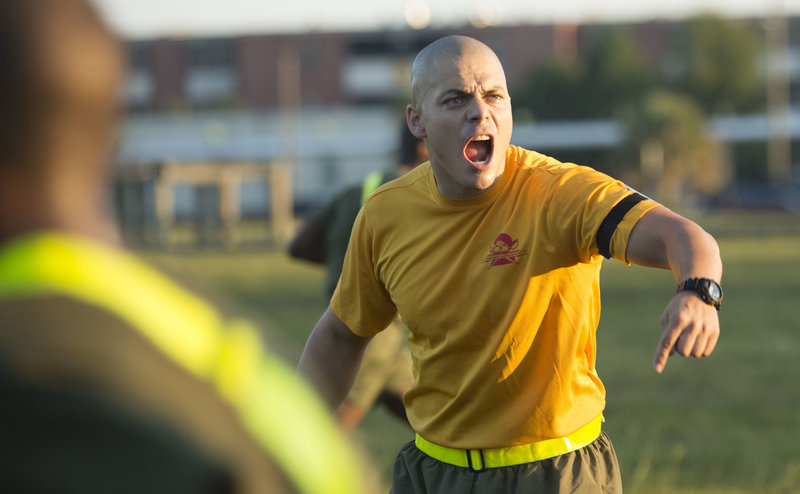 1SG Mike Case
Posted >1 y ago
If I approached this 2LT and he was unprofessional, I would continue to follow him and remain professional, but would in a very loud voice, continue to remind him of his uniform discrepancy. Eventually someone who outranks both of us would find us and step in. I would then explain the situation and if I received a reprimand for my actions, so be it, but GMA gives us all the right to make those on-the-spot corrections. Before I sewed my name tapes on, I walked into the shoppette and I heard a very timid voice say "1SG" like three or four times and I finally turned around and saw a young female PV2 standing there and she proceeded to inform me that I had two U.S. Army name tapes on. Talked about embarrassed but I thanked her for squaring me away and I walked out of the shoppette and got my name tapes sewn on that day.
(158)
Comment
(0)
show previous comments

GySgt Kenneth Pepper
16 d
A1C Randall Layton - There are no Command Sergeant Majors in the USMC.. Forgive the trolling but I couldn't leave it.
(0)
Reply
(0)

A1C Randall Layton
15 d
GySgt Kenneth Pepper - Sergeant Major is considered a senior non-commissioned rank in the USMC. They hold the same rank as Master Gunnery Sergeant. However, instead of maintaining their MOS, a SgtMaj switches to a command-related MOS for a leadership assignment typically at a Battalion level. The command related MOS part was what I meant. I was ex-Air Force I just assumed the Marines had something similar like below:
Command Chief Master Sergeant (E-9)
A Command Chief Master Sergeant is considered a special title and role. Their responsibilities are similar to Chief Master Sergeants, mentoring junior officers and assuming leadership of all personnel in their unit. Unlike the Chief Master Sergeant, they have additional assignments such as acting top commander to Wings, Number Air Forces, and Major Commands. These are larger units that provide operation and mission support.

Just figured the marines had something similar now. Like below:
Sergeant Major (SgtMaj/E-9)

Sergeant Major is considered a senior non-commissioned rank in the USMC. They hold the same rank as Master Gunnery Sergeant. However, instead of maintaining their MOS, a SgtMaj switches to a command-related MOS for a leadership assignment typically at a Battalion level.

GySgt Kenneth Pepper
13 d
A1C Randall Layton - Thanks for the EMI on rank structure, but I had that class about 30 years ago. If you were really knowledgeable on the subject you would know that we refer to SSGT and above as "Staff Non-Commissioned Officers" (SNCO).
(0)
Reply
(0)

CPT Nicholas D.
Edited >1 y ago
Posted >1 y ago
If you are junior in paygrade, you make a respectful correction. If he (or she) blows you off, you can pass it up your chain to whoever cares. If you are senior, you can make a more demanding address, but should still be courteous and not made with a scene. (Praise in public, punish in private) I have never understood however, why some believe that things like uniform infractions are fair game to dump all other Army regulations. There is always THAT GUY who is springloaded to jump into people's faces. Courtesy costs nothing.

Everyone hates 2LTs. 2LTs hate 2LTs. But if we believe in good military order and discipline, we don't sacrifice our respect for each other to be uniform martyrs. If a 2LT is wearing headphones in the commissary, you are well within your right to inform the officer of his inappropriate headgear indoors. If he is disrespectful and indignant, then in my humble opinion, his attitude is a bigger infraction than the headset. That's definitely worth addressing. But I have never been impressed by stories of NCOs giving some idiot officer a piece of their mind while tossing courtesy in the garbage can. That's not being a good NCO.
(143)
Comment
(0)
show previous comments

SSG Robert Perrotto
3 mo
SFC Thomas McMahon - I am amazed that someone ENCOUNTERED a Warrant Officer, let alone a Gaggle of them 8 )
(2)
Reply
(0)

LTC John Wilson
3 mo
I must not have been paying full attention. Got distracted or one of the grandkids came in and distracted me. Apologize. Drive on!
(1)
Reply
(0)

Capt Ken Davis
29 d
1LT William Clardy - During my first tour of duty, I only recall seeing a Warrant Officer one or two times. My second tour, none at all. My third tour, I worked for one and became one. Throughout my career, I've encountered literally tens of hundreds of Warrant Officers, the lions share of them in maintenance and technical fields. Their duty's and assignments are no mystery and they perform them with knowledge and experience. I suspect if any mystery surround the Warrant Officer community exists, it would be because of their very small numbers in comparison to the other officer communities.
(1)
Reply
(0)

SSG (Join to see)
Posted >1 y ago
Well I can say, when I was in Afghanistan I had a 1LT, good guy did his job, but one day walking back from the DFAC, an CSM stopped him and asked him where is eye protection was, his answer to the CSM was I don't wear it. He kept right on walking, but unfortunately for LT the CSM was accompanied by a LTC, who them came up and asked the LT to "unf**K" himself and apologize to his CSM for not listening when he was making an on the spot adjustment. I am sure there has to be an officer of higher rank that would love to correct that 2LT.
(60)
Comment
(0)
show previous comments

LCpl Bradley Otto
>1 y
I know for a fact our Company Gunnery Sgt. Never minced words when it came to making on the spot corrections, no matter Officer or Enlisted. I'm sure there were also levels of intensity for each. But I witnessed him unf%ck an 2nd Lt. And after that 2Lt became one of the Company's best jr officers.
(3)
Reply
(0)

LCpl Glenn Kellar
21 d
Served with a young WO1 who ordered me to replace a track on a machine outside summer hours in the desert. Yeah, I broke it, I fix it was my thought. The skipper asked me next day why I was out there. I told him my orders. Next time I saw the young WO, he was having a fun run with the skipper. Skipper pushed him until he dropped and Doc had to give him IV fluids while Skipper observed, standing in the sun. The WO never came close to us again. He was attached to a different section to start with.
(1)
Reply
(0)

PO2 Dan Shulla
18 d
Lt Col Paul Maxwell - The Surgeon corrected her and there was a reason to do things his way. The best patient care was paramount, not a 90 day wonders feelings. Sir. He was a combat surgeon. She was fresh out of nursing school and didn't know Jack. . I had been doing the job a LOT longer than she had. That surgeon and I had spent MANY hours saving lives and legs. His name was Dr. Sowden. That was a couple years before the end of the Viet Nam war. The nurse was Ensign Marty McGaffen. I think the lesson she learned was to not pull rank just because you can, especially when someone else ha been doing the job longer and has direct instructions from the one with final say.. How many fresh out of OCS got their men killed because they didn't listen to their NCOs? At one small command we had a Medical officer that really didn't know his stuff. (He was unable to make 0-4 and left the service) When it came to emergency medicine, I was one of two that did, and the C.O. knew it apparently. I'm not patting myself on the back here other than I had to be good at what I did or people died. I earned the respect in that, of a Navy SEAL platoon. When the C.O. told my wife "If I was ever hurt, I want Dan there" I was surprised. That was Capt Bruce Sonn, USN
(0)
Reply
(0)
Show More Comments
Read This Next
RallyPoint Home