What do you do when a soldier refuses to listen to your directions? 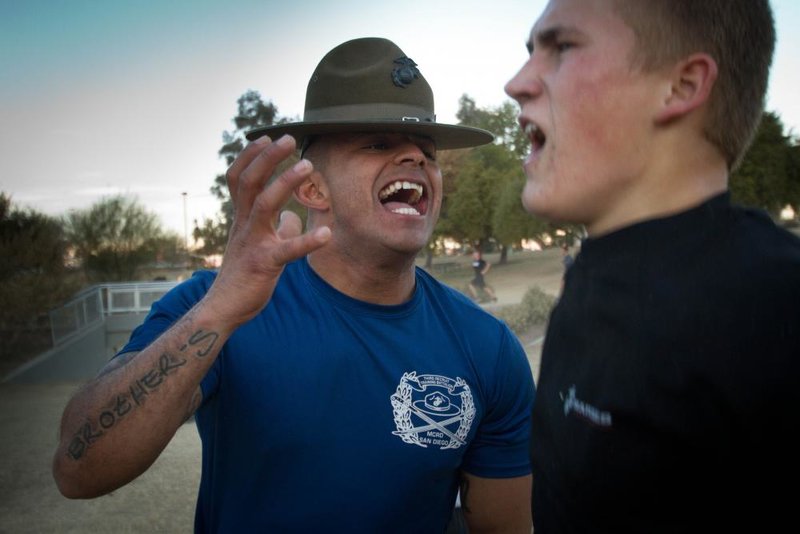 This is a general question. If you have a soldier who refuses to listen to you, as a non-commissioned officer, do you simply put the incident on paper?

Example given- A soldier has unauthorized sunglasses on in a formation. You tell the soldier to take the sunglasses off. He/she refuses.


On the 4856, do you recommend for UCMJ? I've gone thru 600-20 and cannot find anything regarding this
Posted in these groups:

SFC (Join to see)
Posted 5 y ago
1. You remove the sunglasses and crush them beneath your feet.
2. Feel Private Snuffy's dreams being crushed there as well.
3. Revel in your awesomeness as Private Snuffy cries about his $200 Ray Bans, knowing that is the last time he will question your authoritay!
(838)
Comment
(0)
show previous comments

SGT Michael Raymond
11 mo
1SG Irvin Collins TOP, This post, this question is scary to me. You guys seem like your raising children not building soldiers. I’m reading posts of soldiers complaining about doing PT on 4-5 hours of sleep, we have NCO’s asking what if my soldiers don’t obey me? What is going on? So now they reach out to social media instead of their chain of command and the hands on NCO mentoring them? I don’t know, it just seems like the Army is now about “Management”, not Leadership! If that is accurate, I certainly would want nothing to do with Administrators playing soldier, so there’s no way I would even join a Military like that! Why? They’d get me killed for sure. The Army babying these men doesn’t help them, it’s making you all look weak because it is weak. My concern is that The Army has become a culture of weakness that’s being implemented by administrators! Hopefully I’ve totally missed it and my concerns are not valid.
(0)
Reply
(0)

SGT Jim Wiseman
5 mo
SGT Michael Raymond - I stayed in the military for five years after I was injured in Afghanistan. I was Infantry. I spent seven years in and got to take a medical discharge. I could probably have pushed and stayed longer, reclassed. I was a late-life entry. I was about 37 when I went in as a E-1 fuzzy. I expected the Army to be hard and I got pretty much what I expected. The Army life isn't nearly as hard as most would have you believe, but it definitely has it's difficulties.
It's not nearly as bad as kids today believe. I took my discharge because I just saw the complaints from the marshmallow soldiers as getting worse the further out I would have gone. They need to be "managed" for sure. The unbelievable amount they are NOT taught is astounding! The building of soldiers is sacrificed to the management and is draining. I've held the belief for a while that in the next major war we get into, that civilian parents will wonder why so many of their kids are being shipped back in boxes. Or that so many experienced soldiers are dying out there when we'll all know it's because we couldn't properly train them.
But will someone have the boldness to stand against the grain and tell them in a "no-s**t" fashion that's it's because society has forced us to walk on eggshells around their kids? How many of us that will be physically able will be called upon to come back in to offer instruction and be rougher on them to get the point across? It doesn't have to be the (arguably) hazing-style rituals, but there should be something memorable about the lessons being taught. Traditional ceremonies like blood badges shouldn't be banned, but the use of a sledgehammer resulting in a broken collar bone should always be considered carefully! Pushups aren't necessarily the remedy for all screw-ups, but it can be the form of corrective training for many things.
A kid I knew screwed up for not securing the Humvee correctly one night. Nothing was stolen, but could have been. The corrective action was him locking and unlocking it x number of times in order to remember to lock and secure it in the future. Tailor corrective action to fit the desired outcome. Yell when you need to yell, because, like any kid could tell you, the embarrassment of being seen to be yelled at in public is worse than the yelling. Making the action memorable is the key. Doing physical fitness as punishment or yelling at someone as the universal panacea turns it into: "Do you know how many times that happened to me? I can't even remember why most times they made me do it for."
(0)
Reply
(0)

SSG Trevor S.
Posted 5 y ago
SPC Joe Snuffy, 12 June 2016 at approximately 0630 you refused to remove sunglasses after being given an order to do so. Your actions place you in violation of ARTICLE 91. INSUBORDINATE CONDUCT TOWARD WARRANT OFFICER, NONCOMMISSIONED OFFICER, OR PETTY OFFICER. For these actions I am recommending to the commander that you recieve punishment under Article 15 of the UCMJ.
Kiss of death statement currently in use by your JAG.
(381)
Comment
(0)
show previous comments

SSG Trevor S.
11 mo
SSgt Joseph Baptist - Normally corrective is way better. Sometimes the actions of the troop as so egregious and so known to others that to not take a course of action that recommends punitive action will lead to erosion of good order and discipline.
(1)
Reply
(0)

SSgt Joseph Baptist
11 mo
SSG Trevor S. - I've gone with "punitive", but always with a "corrective" option if the SM was willing to take it. Sometimes the "punitive" shocks them into being receptive to the "corrective".
(1)
Reply
(0)

CPT (Join to see)
Posted 5 y ago
I would absolutely crush a Soldier who was disrespectful or insubordinate to one of my NCO's.

Blatant insubordination like this in my formation (that NCO is acting as my representative in this case) would be recommended for field grade action and maxed out at that. Aside from the rank and pay, I have to give 4 hours of sleep per 24 hour period. Nowhere does it say it has to be consecutive. They'd get 20 minutes at a time.

That should be enough to make my point.

This type of behavior is a cancer and it will spread of you don't crush it. Of course, having been an NCO prior, I take a very serious view on this.
(347)
Comment
(0)
show previous comments

PFC Gerald Bailey
1 y
This reminds of a time that was sitting at the CQ desk during the day answering the phone as a PFC. This SSG comes with his cap on and ask him to take it off. He goes, "Fuck you ,private." So I put mine on. 1SG Rosario walks out of his office with the CPT. He asked me why I had my cap on. I said, "That E-6 is setting the example." Top told said E-6, "Take your motherfuckin' hat and give me 40. After the E-6 was done, Top told him that even during the day the man siitting at the CQ desk should be treated like he was me. In other, he could have ordered to take your hat off. The things you remember from the service.
(0)
Reply
(0)

SPC Terry Pack
1 y
SGT Robert Martin - That is not necessarily on you. There is always going to be a soldier that is going to buck authority for whatever reason. The command structure is there to support you, especially in the 21st century. Had this been in the Vietnam Era, you could have stomped his guts out, and there may have been no more to it. Too many of these brats think they can do whatever they desire, because they have been trained that way their entire life. The command structure is needed more than ever for these seemingly minor things. Protect yourself by using it.
(1)
Reply
(0)

SPC Donald Donovan
11 mo
A solder who refuses an order, no matter how small, is someone who will question authority and get himself or someone else killed. I I tell you to duck, you duck. You do not turn around and ask why as the bullets rip through your insubordinate body. Unauthorized eye wear is "UNAUTHORIZED" for a reason. Not to bust your chops, because there is a reason we do as we are told. If you do not agree, take it up later in private, unless you wish to REMAIN a Private.
(0)
Reply
(0)

SPC Logan Cameron
7 mo
hey, Captain Dumbass. it actually IS four consecutive hours of sleep in a 24 hour period. after 24 hours the cognitive effect is similar to chugging three beers at once, and it's an effect that doesn't diminish, only worsens. literally any medic or brigade surgeon (that, duh, the medics work for) will tell you this. I would absolutely LOVE to watch you stand at attention while the bird colonel in charge of the hospital tears you apart with your BN commander standing by you getting the same as a result of your actions.

you have options to effectively correct the problem. that aint one, fix yourself.