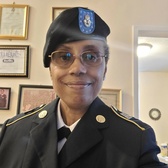 My dad served in the Army Band. It was his MOS. He was a music education major. He was a high school Band Director. He was stationed at Ft. Lewis Washington. I have uploaded his picture on this website. I was economically impelled to join also. I had just graduated from South Carolina State University, with a B.S. Degree in Music Education. I performed the Mozart Concerto in A for my Senior Recital. I was really, very good!!! I just did not have a clue that I was.

Started in Feb 2000
S-1 Personnel Specialist
HQ | Fort Huachuca, AZ
I proudly served in the REGULAR ARMY, an Active Duty Soldier. Not Reserve, not National Guard. I served TWO PERIODS of Regular Army Service. I HAVE TWO Separate Basic Training periods.(Ft. McClellan Alabama, Charlie Company Cobras, Second Platoon, Training Battalion, Oct 1980 and C Battery, First Battalion 19th Field Artillery 1st Platoon Night Stalkers, Sept 1999. My First Period of Regular Army Active Duty Service, my MOS was 02J20 Clarinet Player(1980-1986). My AIT was the School of Music, Naval Amphibious Base, Little Creek, VA(6 months). Permanent Duty Stations were, 1st Army Band, Ft. Meade, MD, 8th Army Band, Seoul Korea, and the 19th Army Band, Ft. Dix, NJ. My second Regular Army Period, Sept, 1999-Nov 2002, my MOS was a 75H20 Personnel Sgt for S1 at Ft. Huachuca, AZ, and 38th PSB(Personnel Service Batallion, Bamberg Germany. I am a GWOT(GEE-WATT) Veteran and was mobilized at Ft. Huachuca, AZ on a POST QUICK REACTION FORCE the day the twin tower's fell on (Sept 11, 2001). DOD sent out a THREATCON DELTA order, and Unit Commanders were ordered to choose soldiers to be quarantined to a separate barracks, at Ft. Huachuca, sleeping in full uniform, with field gear right beside our bunks. We worked in 12 hour shifts, JAG read us our RULES OF ENGAGEMENT before every shift, then we were marched down to the ARMS ROOM TO BE ISSUED OUR M16s from the Supply Sgt. who also issued us 4 magazines of Live AMMO. We began to mobilize to different parts of the POST locked and loaded as we were receiving Bomb Threats. We also assisted the MPs with Post Check Points. I was assigned to guard, with M16, and live Ammo an Outpost on Ft. Huachuca along with another female Soldier. She was from Africa. I was terrified, but did my duty.