My Wingman: What Tim Bolyard’s Life and Death Taught Me

"My Wingman: What Tim Bolyard’s Life and Death Taught Me

Living in a tent in Afghanistan means not having secrets. Such intimate conditions unveil what time of day you work out, your bathroom routine, how loud you snore, and many other unmentionable life details. I learned in such a tent that Command Sgt. Maj. Timothy Bolyard stayed up late and loved his snooze button. What I failed to realize in the moment was that Tim was giving me a graduate course on leadership. His life, as well as the experience of his untimely death, have made me a better leader and a better person.

Military relationships connect people in meaningful ways because they exist in harsh conditions amid shared hardship. We share joy, pain, drama and countless small moments that at the time seem trivial but often last a lifetime. This shared suffering and these small moments often lay the foundation for relationships that go far beyond our service. For me, the value of my relationships with my command sergeants major exceeded that of any other partner. There is no more important relationship in the Army than that of a commander and command sergeant major. The climate, effectiveness and morale of a unit hinge on how closely the two can work together. A healthy command team relationship usually means a healthy climate and an effective unit. Likewise, the opposite almost always results in dysfunction and poor working conditions for subordinates.

Tim and I did it the right way. When we first joined forces at Fort Benning, Georgia, to serve as the first command team of the 3rd Squadron, 1st Security Force Assistance Brigade, we carried the responsibility to help build not only a new unit but a new kind of unit. Security force assistance brigades were established by the Army as the first permanent units whose core mission is conducting security force assistance activities, which enable brigade combat teams to focus on decisive action. Tim and I reported as two of the first members of a unit that had no equipment, few people, no headquarters and no name. We had no blueprint, no training plan and no doctrine to follow. So, we relied on what had worked for both of us in the past—take care of our people the best we can. What I found, however, was that I was still an amateur when it came to caring for people compared to my new command sergeant major.

I pride myself on my emotional intelligence and feel like I read people pretty well. Combining what I thought I understood about myself with the fact that we spent a lot of quality time together in shared living and workspaces gave me (what I thought was) an appreciation for Tim. He spent countless hours with our NCOs, going over records, discussing career goals and leadership challenges. He did this in a number of creative ways, like “recruiting” younger NCOs to help with small projects, joining in workouts at the gym, or aggressively pursuing quality of life improvements on our camp. I thought I knew everything he was doing for the soldiers. I thought I knew everything he was doing for me. I didn’t. I learned that I did not fully understand the full extent of Tim’s leadership until Sept. 3, 2018, the day he died of wounds received during an insider attack.

The quiet moments in the months following were the most challenging of my life, both personally and professionally. I have had my fair share of heartbreak, but I had never experienced anything close to losing my command sergeant major. Having to balance dealing with my personal grief, leading our soldiers through their grief, and maintaining vigilance on the continued mission and risk, challenged me more than anything has in my life.

Like all challenging life experiences, this one taught me quite a bit. Above all, Tim reinforced for me the tremendous impact one leader can have on any single person in whom he takes interest. The examples I saw and heard about after his death, of Tim spending time with a junior soldier or NCO to help solve a problem, are countless. Every person Tim met—junior, senior or peer—was worth his time. Frequently, he would peel off when we would walk somewhere together to ask a soldier about their family, to make sure everything was OK in their world, or to just shoot the bull. He reminded me of the value of every interaction a leader has with someone and its potential impact. In other words, humility paired with great care for people will result in good leadership.

I, too, benefited from his time and commitment. We shared a common vision for how to do things, and we had a healthy working relationship. He reminded me, when I would get bogged down in my own world, that we were more valuable as a team than as two separate individuals. He would check up on me to make sure I was where I needed to be mentally, ask if I needed anything, or see what was going on in my head. He also frequently came to ask if he could do anything to be a better command sergeant major. Because of our relationship and our mutual trust, he would constantly ask questions such as: Did I do that right? Was I too harsh? How can I handle that better next time? Ultimately, Tim covered my blind spots and I covered his. This foundation of trust made us stronger together as a command team, which only brought stark reality to what I already knew: Trust and teamwork are essential components to good leadership.

Being a good leader and teammate sometimes requires candor and hard truth, which are not always reserved for subordinates. Nor does the hard truth need to be delivered with superfluous emotion, condescension or personal attack. Good leadership means delivering honest and direct communication to the person who needs to hear it, without so much emotion that the message gets lost. I received my share of candid feedback from Tim that I will cherish for the rest of my life, but it was in his interactions in Afghanistan that I learned the most. We served at a camp that required significant rebuilding to meet basic force protection and quality of life standards. He never held back his opinions about what we needed and the urgency with which we needed it. It didn’t always result in action, but it did often enough to justify his boldness. He had the courage to tell senior leaders that he had a problem that needed a solution. I will always remember that good leaders show courage and speak the truth, especially when soldiers are affected.

When Tim was killed, I again relied on the philosophy he and I shared and tried to focus on taking care of people as best as I could. There was still risk, and we needed one another more than ever.

That translated into making as many resources available to the formation as soon as possible. The presence of our local chaplain, in addition to the brigade chaplain, was critical to dealing with the initial shock of losing the command sergeant major and was the most reliable resource over time. Further, we were blessed to get the support of multiple behavioral health officers from different units in theater. Honestly, anyone we thought could help, we requested. Every senior leader I talked to offered every resource available, and when we asked, the resources came.

What I feel was as important as bringing in outside resources was leader presence. I could tell that people were worried about me, and I felt it necessary to be as present and transparent as possible. I encouraged others to do the same. I was as present as I could be while balancing my own emotions and taking private moments to grieve. The resulting interconnectedness set the right tone for us all to start processing our pain. We dedicated time to talking about Tim both publicly over cigars and near-beer and in private. We targeted those who seemed to be having a tougher time, as well as those we knew had history with Tim. In many ways, the unit’s reaction to his loss was simply a reflection of Tim’s care for others in life, and it served to highlight his impact.

The most important measure I took, in my opinion, was having the courage to seek help for myself and speak about it publicly. I was having trouble sleeping, was experiencing nightmares, and I had to perpetually fight off the sadness that was trying to engulf me. The contest between my responsibilities and my grief was a fierce one. As I described, we had ample resources available for those who sought them, and I did my best to do so, even after the deployment. I never believed in the idea that getting help would harm one’s career, nor did I care, so I talked about my experiences. The volume of feedback we received from our soldiers and their spouses, however, alerted me that we still have a problem in the Army: Our soldiers still have reservations about seeking help for their mental and behavioral health.

Potential career implications still give pause to our senior NCOs and officers who consider behavioral health assistance. They fear that seeking counseling will make them appear weak, render them unable to deploy or damage their reputation. When I revealed to the squadron that I had sought counseling, the responses from soldiers, family members and caregivers made it clear that the stigma is still alive and well. Some simple transparency from me made it OK to get help and also showcased that this old stigma still exists.

We don’t have a resource problem; we have a perception problem. Leaders own the responsibility to fix military culture and remove the stigma about getting help. This starts with leaders actually getting help when they need it, then being candid about the experience. It is the only way the stigma will fade.

Often in life we do not fully appreciate the light in others until that light is extinguished. Regrettably, this was also the case with Tim. Through empathy, humility, candor and teamwork, Tim improved the lives of those around him, including mine. I will never forget the day we lost him, but I will continue to spend each day trying to be as much like him as I can. It was the quiet times following the tragedy that afforded me the opportunity to take full stock of the man at my left. My wingman." 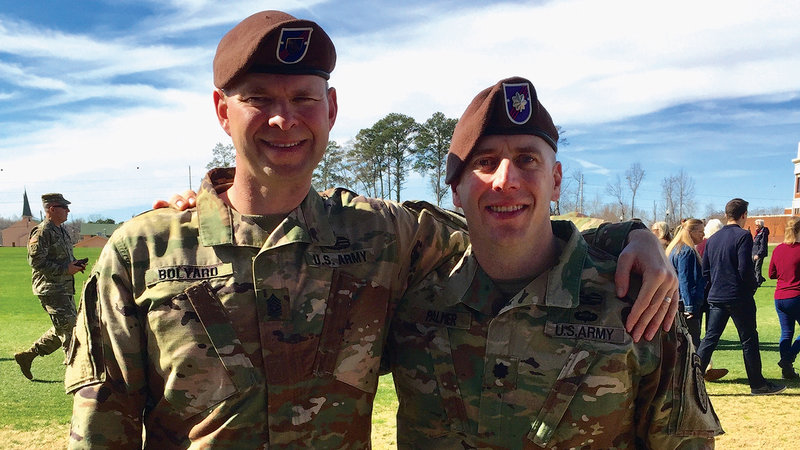 My Wingman: What Tim Bolyard’s Life and Death Taught Me

Posted from https://www.ausa.org/articles/my-wingman-what-tim-bolyard’s-life-and-death-taught-me
Posted in these groups: