The 101 Airborne Division is marking a somber anniversary as members commemorate the 248 soldiers lost when Arrow Air Flight 1285 crashed while returning home from the Sinai Peninsula.

Thirty-five years ago, this week, the 101st Airborne Division faced its most tragic day when a civilian airplane bringing 248 soldiers home for the holidays following their Middle East mission crashed shortly after takeoff, killing all aboard.

This Saturday the division will mark the anniversary of that loss, which also included eight crewmembers, at a site dedicated last year at Fort Campbell, Kentucky, home of the 101st Screaming Eagles.

The soldiers, most of them assigned to the 3rd Battalion, 502nd Infantry Regiment, were heading home on the last leg of their journey following a six-month peacekeeping mission in the Sinai Peninsula, part of a Multinational Force and Observers peacekeeping mission between Egypt and Israel that continues to this day.

Tragically, five U.S. soldiers and two other MFO members died in a Black Hawk helicopter crash in the Sinai region on the same overseas mission Nov. 12.

The monuments will be moved to a new site and new trees will be planted to honor the fallen.

The 1985 flight was taking off after refueling in Gander, Newfoundland, Canada, on Dec. 12 when ice on the aircraft’s wings caused it to crash, an investigation later discovered, .

“The Gander tragedy remains the single largest loss of life in the history of this storied division‚” said Maj. Kevin Andersen, spokesman for 2nd Brigade Combat Team, 101st Airborne Division, in a statement for last year’s dedication. “The Fort Campbell community will continue to come together each year on this day to honor and remember the sacrifice of these soldiers, their families and their comrades in arms.”

Due to COVID-19 restrictions, the in-person event is by invitation only, but the unit will be livestreaming the ceremony on its Facebook page beginning at 9:30 a.m. CST, Saturday, Dec. 12.

The last ceremony at the original memorial site was held in 2018 near a major traffic circle at the installation. Following the 1985 crash, Janice Johnston Nikkel, a then-15-year-old Canadian citizen, pledged babysitting money to create a tree park.

She encouraged others to do the same and Sheridan Nurseries near Oakville, Ontario, helped gather and donate the 256 Canadian sugar maple trees that were later planted at the Fort Campbell site and stood for more than 30 years alongside stone markers with the names of the fallen.

The roots of the trees began to grow together, causing concern for their long-term health and prompting the relocation last year.

The new site contains the same monuments and eight of the original 256 trees. The remaining have been replaced with new trees at the new site. Local woodworkers used wood from the salvaged trees to craft keepsakes for families of the fallen soldiers.

The new memorial is located on the facility at the site of 2nd BCT, the unit that sustained the majority of the losses in the crash." 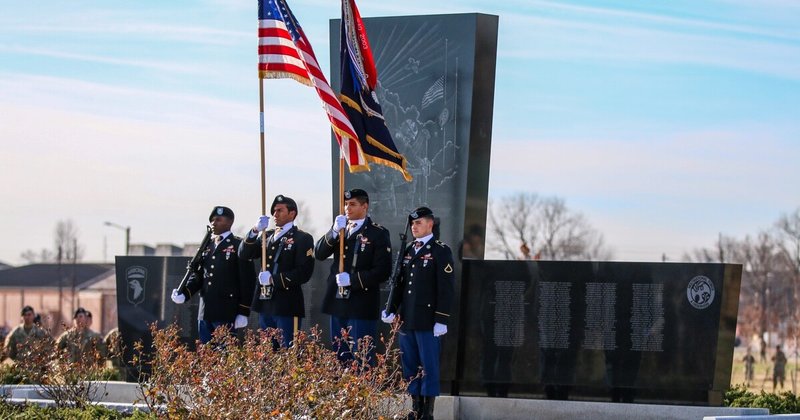 Posted from armytimes.com
Posted in these groups: 101st ABN

SGT (Join to see) with the utmost respect and dignity, thanks for the remembrance read/share, I saw a documentary on this. So horrific may they RIP forevermore.