Second Lt. Wyatt Koch and Spc. Robert Shook, both based in Laurinburg, were sent near Wilson, North Carolina, with their team to look for people in need of help.

“The course of action we established was to go over a quarter mile of water in our [Humvees],” said Koch, platoon leader for the 151st Mobility Augmentation Company.


Shook, a combat engineer with the 151st Engineer Battalion, said the water was more than 6 feet deep in some areas.


“Our vehicles actually took water into their snorkels,” he said.
Around 2:30 a.m., a man called the police department saying his mother had left work at 11:30 p.m. and still wasn’t home.

Koch and Shook headed out with Capt. Bert Hendricks from the Wilson County Emergency Medical Services with a plan to deploy the Humvee down one side of the flooded street while the fire department deployed a rescue boat on the other side.

The woman was stranded in a tree and heard the Humvee engine, Koch said, but they weren’t able to hear her over the noise.

A police officer who was assisting called in that he heard a cry for help, so Shook and Hendricks went onto the roof of the Humvee as Koch killed the engine.


Shook heard a noise, so the three of them started searching with their lights, but then the noise came from farther away. They drove forward 100 feet and cut the engine again – Hendricks then spotted the nurse with the spotlight.


Koch said the current was strong and about 8 feet deep at this point. They tossed a throw bag and rope, but it missed the woman. She was able to grab onto a second throw bag and rope but lost her strength after being pulled about 5 feet.


“By this time, she had been there for about three and a half hours and was in hypothermic condition,” Koch said.


Shook immediately ditched jumped into the water. He held onto the woman and kept her head above water until the fire department’s boat was able to reach them.


“Specialist Shook is definitely the hero of it,” Koch said. “You always hear about the commander, but it’s definitely about the soldiers.”


Shook said as soon as he saw the woman lose her grip and start drifting away, he didn’t care what items he had on him.


“I knew I had to jump in and grab her and save her life,” he said. “I knew she had a family, and I was willing to do whatever it took to prevent her from drifting further into the woods or drowning.”
“When we first got word of the mission, the only thing I could really think about was, ‘We have to find this woman,’ ” Shook said. “When we couldn’t find her the first time, I was like, ‘Man, just give us a sign.’ ”

That’s when they heard that there had been a cry for help.


The nurse was taken to the hospital, where Shook and Koch went to visit her and meet both of her sons.


Shook and Koch were certified in swift-water rescue during annual training in June at the U.S. National Whitewater Center in Charlotte, North Carolina.


“Really where the training kicked in is being able to grab the person and properly tread water while holding their head above water without endangering yourself and them,” Shook said.


The woman was caught on some branches under the water, but the training taught Shook how to check for that before moving and potentially injuring her. Shook said the woman didn’t panic during the rescue, which helped it go smoothly.


Koch said the team that was sent out during the hurricane had the motivation, drive and willingness to protect and serve those affected.

“All of us work together cohesively as a team element,” he said. 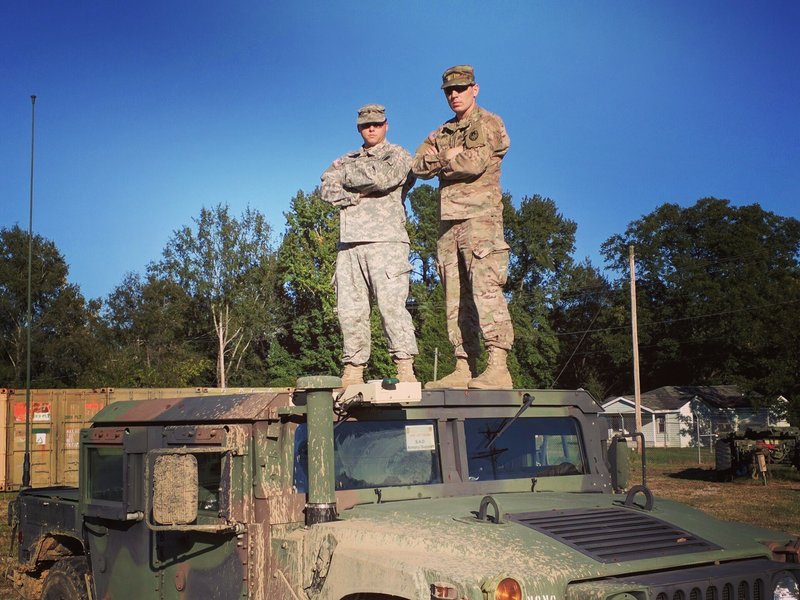 Maj William W. 'Bill' Price
Posted 5 y ago
Great story, SFC (Join to see). Someone in the Guard who knows 2LT Koch and SPC Shook to join us here.
(3)
Comment
(0)