8 Symptoms Of A Toxic Command Climate

A great deal of time and effort has been spent by military leaders trying to seek out and prevent horrible command climates. The term often used is “toxic.” Time and effort is spent on sexual harassment and equal opportunity training, suicide awareness, and risk management in order to demonstrate that unit leaders “are doing something” and care about their soldiers.

Yet, looking out across Army formations, not much has changed. Toxicity continues and soldiers are smothered within commands that ultimately destroy their morale and willingness to serve, or worse, teach young impressionable leaders that “this” is how to lead.

For leaders and future leaders, it’s important to recognize what a toxic command climate looks like. Just as important is to recognize the symptoms in order to understand that what they might be experiencing is not how a command climate should be. Leaders, current and future, who know what to look for can take steps to limit it or at least ensure that they don’t fall into the trap and promulgate the disease.

Within companies, symptoms of this can be as innocuous as timelines specifying every action and activity down to the minute, leaving no room for flexibility. It can also be as sinister as battalion and company levels digging down into squads and teams to the point of directing what individual soldiers do within a task given to a platoon. Delegating tasks and missions to subordinate-level leaders is required; however, this becomes toxic when these subordinate leaders have their decisions adjusted without cause, have their superiors question “why” and the “what” for everything decision made, and are berated without any support to fix issues. Constant meetings and briefings are another symptom of micromanagement that people tend to overlook. When higher command requires numerous time-consuming meetings and briefings in order to “get a warm and fuzzy,” it’s more a demonstration to subordinates that the command doesn’t trust their abilities or decisions.

2. There’s a lack of respect shown from higher echelons to lower, and the lack of simple professionalism.

Common courtesy — the use of “please” and “thank you” in emails or when speaking to a subordinate — goes a long way to demonstrating care and concern. However, in many horrible climates, these niceties are considered unneeded “fluff” and a waste of time. Along this line, horrible climates often lack professional courtesy, something demonstrated with a lack of information dissemination. Information is withheld until the last possible moment with little concern as to how it affects a subordinate’s mission. Warning orders to initiate necessary movement aren’t sent out until the operations orders are almost complete, with the “one-third, two-thirds” rule often reversed so subordinate leaders have next to no time to plan their own execution. In horrible command climates, orders, emails, and phone conversations are one way, single-line commands with little additional background given. Desired end states and standards are often ambiguous and lack clarity, which then maximizes subordinates’ uncertainty. In these environments, soldiers, noncommissioned officers, and officers are slammed repeatedly for not knowing the right way to accomplish tasks to higher ups’ standards. However, they continue to fail because senior leadership never takes the time to teach and mentor subordinates what right looks like, or the expected standards.

Holding the group accountable for the actions of one or a few. This happens when superiors restrict freedoms and privileges en masse, opposed to holding individuals accountable and make them examples. Mass punishments are the norm in these climates, with toxic commanders adhering strictly to the letter of every policy and regulation in order to maintain “good order and discipline.” The unforeseen side effect of this overzealous method is that it is taken to such an extreme that it actually destroys good order and discipline, morale, and initiative. On the surface, this notion seems to come from a paternalistic place, wanting to care for and protect subordinates. However, when subordinates listen to what their leaders say and observe their actions, it’s made clear that higher leaders are simply trying to protect their own reputations. Soldiers need to be allowed to fail or they will never learn.

4. Leaders tend to have a suffocating adversity to risk.

This is why the attitude in many horrible climates is “That’s the way it’s always been done, and will be the way it always will be done.” “Change,” “new,” and “different” are curse words. Toxic leaders in horrible command climates often can’t see past their own experiences or ideas, and do not tolerate ideas that they don’t understand. In these climates, battalion-level “S Staffs” are usually the only officers or noncommissioned officers whose new ideas are given any credence. When decisions are required from senior commanders, they aren’t made until the last possible moment, waiting until they have the answer and it’s too late, unwilling to make an informed guess when the decision was needed. Initiative in horrible climates is often knocked down, berated, or counseled by their leaders. If subordinates try to find answers on their own and seek out information that might be outside of the knowledge of the staff, they are slammed as “jumping the chain of command” for the perception that they challenged the S sections.

5. There’s no meaningful purpose behind any order or task given to subordinate elements.

In toxic command climates, “hey yous” and last-minute tasking run rampant in garrison and training environments. There is either no plan, or there’s planning to such an extent that it becomes unworkable, inflexible, and falls apart immediately upon mission start. In toxic command climates, when higher echelons need to provide a reason for something, these reasons are often limited to “We do this so we can look good to higher” or “Because I said so.”

6. There is no attempt to develop subordinates.

A symptom seen in almost every bad command climate, is that senior raters rarely meet with rated noncommissioned officers and officers. Counseling as a whole is typically lacking. Raters often refuse to verbally counsel rated noncommissioned officers or officers on how they are doing until it’s quarterly counseling time, and then slam the subordinates for shortcomings or mistakes. This creates a situation where subordinates fail to fix mistakes or shortcomings when they are small, and those issues can then end up on subordinates’ evaluations. Within horrible climates, subordinate noncommissioned officers or officers’ evaluations are typically based on how good they made the command look, how many morale, welfare, and recreation runs and events they took part in, and how well the subordinate towed the “party” line and didn’t give push back against anything that was put out. No consideration is paid to subordinates’ embodiment of the principles of mission command or whether they have any leadership ability, technical and or tactical competence, ability to accomplish the mission, or are actually effective as leaders. Within horrible command climates, mentorship and development of junior leaders is inconsequential.

7. Superiors take all authority from the noncommissioned officers and platoon-level officers within the command.

Authority and the decisions to punish minor and even medium-level infractions are withheld at the company levels or even battalion levels and are never allowed to be handled at the lowest level. You can see this in units where every counseling statement must be pushed up the chain of command, and violations often result in UCMJ action. Another indicator would be in a battalion that removes platoon- and company-level leaders’ authority to conduct corrective training or action on soldiers’ off-duty days, but will force soldier participation in events that would make the battalion look good. In these battalions, noncommissioned officers are kept separate from their subordinates at all times when not on duty due to a constant fear of violating the battalions own very restrictive fraternization policies. This not only allows soldiers to run amuck by preventing noncommissioned officers’ ability for direct supervision during off-duty hours, it prevents the important mentorship that can only take place off duty, in relaxed settings.

8. There is a complete lack of trust of superiors, between peers and between subordinates.

This can be exacerbated when higher-level leaders give soldiers the ability to submit complaints directly to the battalion commander and battalion command sergeant major, effectively destroying the authority and trust of the lower levels of the chain of command. Additionally, these climates offer absolutely no attempt to handle the situation at the lowest level. In an effort to seem fair and open to subordinates, leaders in these climates allow soldiers to submit complaints anonymously through email or using drop boxes scattered around the battalion area, and those complaints then trigger investigations into any allegation of wrongdoing, leaving subordinates powerless and untrusting of their superiors. This lack of trust devolves to the point that soldiers are encouraged, threatened even, to report on the behaviors of their peers so that they themselves don’t get into trouble. This leads soldiers to turn on each other, accusing and pointing fingers, in the hope that they themselves won’t be accused.

Leaders in horrible command climates also destroy their subordinates’ trust of higher ups. They can do this in a many ways, but one of the fastest is to make truth and honesty secondary to expediency and desired outcome, supplanting the truth with falsehoods and half-truths for the sake of getting what higher leaders want. Commanders who make unpopular decisions behind closed doors, and then blame someone higher in the food chain for the decision is as perfect example. With the levels of micromanaging and undermining of authority found in bad command climates, trust from higher is perceived to be nonexistent.

Is this list all inclusive? No, but it’s a decent look at some symptoms of truly horrible command climates, and what they look like. With that said, positive leaders need to recognize these issues, and stand firm against them. 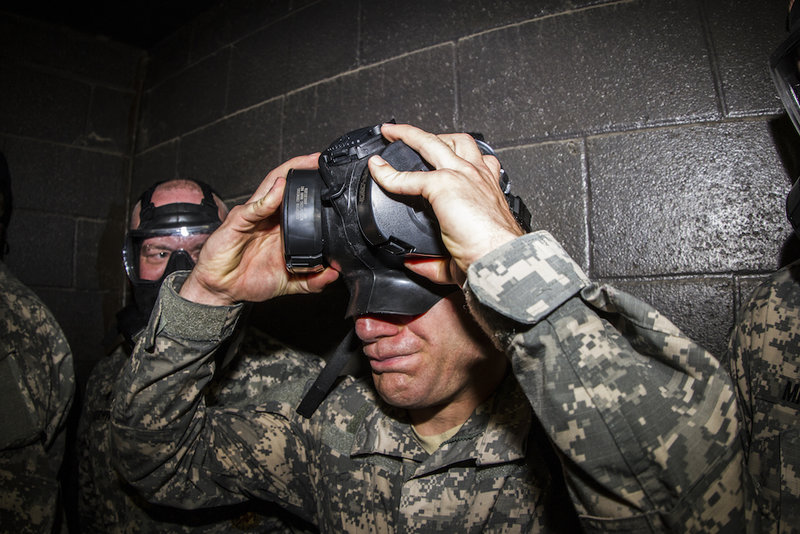 8 Symptoms Of A Toxic Command Climate

LTC Stephen F.
Posted 4 y ago
Thanks SFC Joe S. Davis Jr., MSM, DSL for highlighting what incoming leaders can look for to prevent toxic leadership habits from continuing to infect their command.
1. Micromanagement exists often on an epic scale.
2. There’s a lack of respect shown from higher echelons to lower, and the lack of simple professionalism.
3. Zero-defect mentalities and zero-tolerance policies are standard.
4. Leaders tend to have a suffocating adversity to risk.
5. There’s no meaningful purpose behind any order or task given to subordinate elements.
6. There is no attempt to develop subordinates.
7. Superiors take all authority from the noncommissioned officers and platoon-level officers within the command.
8. There is a complete lack of trust of superiors, between peers and between subordinates.
(3)
Comment
(0)

Many reading this have been there. Some reading this might be there now: A command climate that can only be described as toxic. Leaders who only look out for themselves. Leaders who micromanage subordinates and destroy morale in hopes of looking good to their own higher. Leaders with extreme adversi...