On December 6, 1606, the journey to Virginia began on three ships: the Susan Constant, the Godspeed, and the Discovery. In 1607, 104 English men and boys arrived in North America to start a settlement. On May 13 they picked Jamestown, Virginia for their settlement, which was named after their King, James I. The settlement became the first permanent English settlement in North America.

The site for Jamestown was picked for several reasons, all of which met criteria the Virginia Company, who funded the settlement, said to follow in picking a spot for the settlement. The site was surrounded by water on three sides (it was not fully an island yet) and was far inland; both meant it was easily defensible against possible Spanish attacks. The water was also deep enough that the English could tie their ships at the shoreline - good parking! The site was also not inhabited by the Native population.

Once the spot was chosen the instructions sent by the Virginia Company, with the list of the council members (chosen by officials in England), was read. The names were kept in a sealed box on the ship (each ship had a sealed copy). The first President of the new Virginia colony was to be Edward Maria Winfield. The other six council members were: Bartholomew Gosnold, Christopher Newport, John Martin, John Ratcliffe, George Kendall, and John Smith.
By June 15, the fort was completed. It was triangle shaped with a bulwark at each corner, holding four or five pieces of artillery. The settlers were now protected against any attacks that might occur from the local Powhatan Indians, whose hunting land they were living on. Relations had already been mixed between the newcomers and the Powhatan Indians. On June 22, Captain Newport left for England to get more supplies for the new settlement.

Not long after Captain Newport left, the settlers began to succumb to a variety of diseases. They were drinking water from the salty or slimy river, which was one of several things that caused the death of many. The death tolls were high. They were dying from swellings, fluxes, fevers, by famine, and sometimes by wars. Food was running low, though then Chief Powhatan starting to send gifts of food to help the English. If not for the Powhatan Indians help in the early years, the settlement would most likely have failed, as the English would have died from the various diseases or simply starved.

By late 1609, the relationship between the Powhatan Indians and the English had soured as the English were demanding too much food during a drought. That winter of 1609-10 is known as the "Starving Time." During that winter the English were afraid to leave the fort, due to a legitimate fear of being killed by the Powhatan Indians. As a result they ate anything they could: various animals, leather from their shoes and belts, and sometimes fellow settlers who had already died. By early 1610 most of the settlers, 80-90% according to William Strachey, had died due to starvation and disease.
In May 1610, shipwrecked settlers who had been stranded in Bermuda finally arrived at Jamestown. Part of a fleet sent the previous fall, the survivors used two boats built on Bermuda to get to Jamestown. Sir Thomas Gates, the newly named governor, found Jamestown in shambles with the palisades of the fort torn down, gates off their hinges, and food stores running low. The decision was made to abandon the settlement. Less than a day after leaving, however, Gates and those with him, including the survivors of the "Starving Time," were met by news of an incoming fleet. The fleet was bringing the new governor for life, Lord Delaware. Gates and his party returned to Jamestown.

In 1612, John Rolfe, one of many shipwrecked on Bermuda, helped turn the settlement into a profitable venture. He introduced a new strain of tobacco from seeds he brought from elsewhere. Tobacco became the long awaited cash crop for the Virginia Company, who wanted to make money off their investment in Jamestown.

On July 30, 1619, newly appointed Governor Yeardley called for the first representative legislative assembly. This was the beginning of representative government in what is now the United States of America. In that same year, the first documented Africans were brought to Virginia. They added needed human resources for the labor-intensive tobacco. Also in 1619, the Virginia Company recruited and shipped over about 90 women to become wives and start families in Virginia, something needed to establish a permanent colony. Over one hundred women, who brought or started families, had arrived in prior years, but 1619 was when establishing families became a primary focus.
Peace between the Powhatan Indians and the English, brought about by the conversion and marriage of Pocahontas (kidnapped by the English in 1613) and John Rolfe in 1614, ended in 1622. In March of that year the paramount chief, then Opechancanough, planned a coordinated attack against the English settlements. He was tired of the English encroachment on Powhatan lands. Jamestown escaped being attacked, due to a warning from a Powhatan boy living with the English. During the attack 350-400 of the 1,200 settlers were killed. After the attack, the Powhatan Indians withdrew, as was their way, and waited for the English to learn their lesson or pack up and leave. Once the English regrouped they retaliated and there was fighting between the two peoples for ten years, until a tenuous peace was reached in 1632.

On May 24, 1624, the Virginia Company's charter was revoked by King James I due to overwhelming financial problems and politics, and Virginia became a royal colony, which it remained until the Revolutionary War. This shift in control did not change the English policy towards the Powhatan Indians. Despite peace being declared in 1632, English encroachments on Powhatan lands continued undiminished as more settlers arrived in the Colony.

In April 1644, Opechancanough planned another coordinated attack, which resulted in the deaths of another 350-400 of the 8,000 settlers. The attack ended when Opechancanough was captured in 1646, taken to Jamestown, and shot in the back by a guard - against orders - and killed. His death brought an eventual death to the Powhatan Chiefdom; it was reduced to tributary status. His successor signed the first treaties with the English, which made the Powhatan Indians subjects of the English.

Bacon's Rebellion, in 1676, saw more struggles in Jamestown. The settlers were unhappy about their tobacco being sold only to English merchants due to the Navigation Acts, high taxes, and attacks on outlying plantations by American Indians on the frontiers. Nathaniel Bacon got about 1,000 settlers to join him and take care of the "Indian Problem." Bacon forced Governor Berkeley to give him an official commission to attack the American Indians to blame. Bacon and his followers, however, did not differentiate between those tribes responsible for the attacks and those who were loyal to the English. Governor Berkeley declared Bacon a rebel and civil war erupted in the colony. In September, Bacon and his followers set fire to Jamestown, destroying 16 to 18 houses, the church and the statehouse. Not long after, in October, the Rebellion began its end with the death of Nathaniel Bacon of the "bloody flux." Eventually, many of the rebels were captured and 23 were hanged by Governor Berkeley.

As a result of Bacon's Rebellion, another treaty was signed between the English and the Virginia Indians. More tribes were part of this treaty than the one of 1646. The treaty set up more reservation lands and reinforced a yearly tribute payment of fish and game that the tribes had to make to the English.
In 1698, fire struck Jamestown again. The fire was evidently started by a prisoner awaiting execution in the nearby prison. The fire destroyed the prison and the statehouse, though many of the public records were saved. In 1699, the government and capital were moved from Jamestown to Middle Plantation, renamed Williamsburg. People continued to live on Jamestown Island and owned farm lands, but it ceased to be a town.

Today, Jamestown Island is a historic site, though there is still a private residence on the island. It is preserved by the National Park Service and Preservation Virginia for visitors to learn about the importance of Jamestown and what was born out of its being the first permanent English settlement in North America." 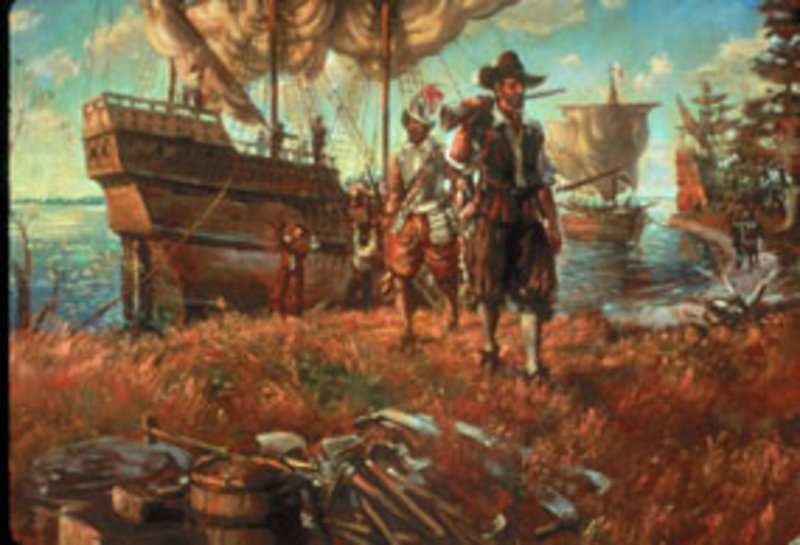 Sgt Jim Belanus
6 mo
Agree, the last time we were there it was cold and raining, hope to make it back and better weather
(2)
Reply
(0)

Lt Col Charlie Brown
6 mo
For all the outdoor stuff, the weather does matter
(1)
Reply
(0)

Sgt Jim Belanus
6 mo
it was winter too. Was warmer there than here
(1)
Reply
(0)

Lt Col John (Jack) Christensen
Posted 6 mo ago
Having dated a history major when in college in Virginia I knew every inch of Jamestown by heart. Also had some fantastic holiday meals at restaurants on the grounds, still remember the peanut soup.
(3)
Comment
(0)

Sgt Jim Belanus
6 mo
They were digging up the old graves when we were there, doing some kind of study
(2)
Reply
(0)
Show More Comments
Read This Next
RallyPoint Home