Army chief to leaders: Winning is everything in combat

SFC Joe S. Davis Jr., MSM, DSL
1.29K
22
9
8
8
0
Competence, compassion and character should drive the men and women who want to lead America’s sons and daughters into battle, the Army’s top general said Thursday as he marked the 100th anniversary of the ROTC program at Norwich University.

Milley characterized leadership as “far and away the most important element” to winning “in the crucible of ground combat.”

Leaders must be competent, Milley said.

Soldiers are not going to follow a platoon leader who can’t call and direct fire, or call for a medevac or close-air support, Milley said.

“There’s no room for second place in combat,” he said. “There are no coins or trophies given out for ties. You either win or lose. What’ll make the difference … is going to be your personal competence.”

Leaders must also be compassionate, Milley said, caring for their soldiers as if they would their own children.

And leaders must have “tremendous character,” he said.

“I guarantee you your character is going to be tested like it never has before,” he said. “You’re going to have to have steel spines to endure the pressure you’re going to face in the years ahead.”
These characteristics are critical for all military leaders, especially for cadets preparing to enter the service, because of the turbulence in the world today, Milley said.

Cadets preparing to don the uniform will find themselves “engaged in a very deep, long struggle with radical terrorism,” Milley said. They also will face a revanchist Russia, an aggressive China, a provocative North Korea and Iran, and “any other multiple contingencies that may arise.”
On Iraq, Milley said “very, very significant progress has been made” against the Islamic State group.

“Progress, however, is not winning,” he said. “No one should be high-fiving in the end zone yet.”

President Obama has tasked the military to destroy the Islamic State, Milley said.

“I am confident that the strategy we are currently executing is applying a significant amount of pressure and a lot of punishment to that organization,” he said. “It remains to be seen whether or not that is going to be enough to destroy it, with the common understanding of the world ‘destroyed.’”

Meanwhile, ongoing efforts have left the enemy without “the strategic momentum, which they did have,” and the group also has suffered “a tremendous amount” of casualties, including in their leadership ranks, and their finances have been affected, Milley said.

“They’re under a very, very significant amount of pressure from the air, from the ground, and through other domains,” he said.

The group is not destroyed yet, however, Milley said.

When asked about whether the U.S. has the right number of troops stationed overseas, Milley said “that’s a tough question that’s currently under debate.”

The issue is whether the U.S. has too much of a forward presence, he said, adding that many partners and allies around the world want to work alongside U.S. troops.

“There is something to be said about being there,” he said. “Our allies and partners do want us.” 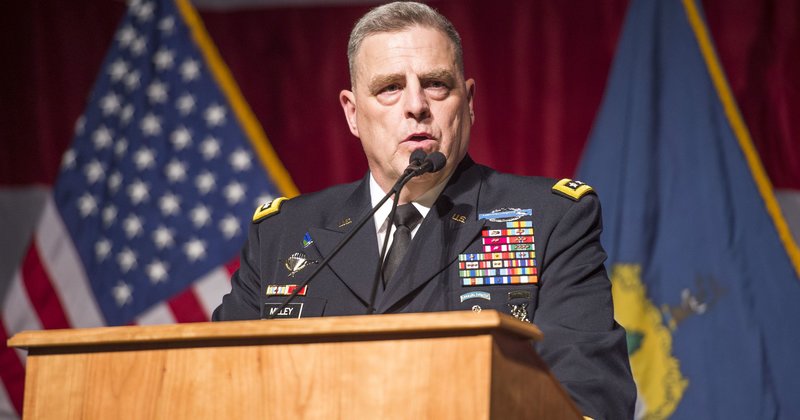 Army chief to leaders: Winning is everything in combat

PO1 William "Chip" Nagel
Posted 4 y ago
Hmmmmm, "Winning is Everything" Mark 8:36 For what shall it profit a man, if he shall gain the whole world, and lose his own soul? I tend to Disagree with the General on this Point.
(3)
Comment
(0)

SMSgt Dr. G. A. Thomas
4 y
PO1 William "Chip" Nagel I believe you're missing his point and the biblical analogy isn't appropriate. If we are to go to war, we must prevail because losing can't be an option. Gaining the whole world isn't our ideology but ISIS and those who share that type of ideology.
(2)
Reply
(0)

PO1 William "Chip" Nagel
4 y
SMSgt Dr. G. A. Thomas - I know what he means Senior and as a Retired Navy Spook you know that when it comes to Warfare plenty of folks consider what I did as pretty Amoral or Immoral. Just noting that Winning at all Costs has a Price, which may be Your Soul.
(1)
Reply
(0)

LTC Stephen F.
Posted 4 y ago
SFC Joe S. Davis Jr., MSM, DSL I concur with PO1 William "Chip" Nagel's assessment. Winning is not everything in combat. Military strategy includes feints, raids and deception to lure the enemy into doing something and/or gain intelligence on his disposition and intent. Sometimes we need to lose tactically to win at an operational or strategic level.
ISIS and their allies think in terms of hundreds of years to achieve their goals. Defeating ISIS and most importantly the underlying Wahhabi doctrine requires non-military assets to be used along with military assets. Don't expect this to be accomplished within the next PTUS term. We have been fighting this war and ideology since the 1960s in Europe and the Middle East. We have had minor successes and seen them turned to victories by subsequent administrations Example: Muammar Muhammad Abu Minyar al-Gaddafi was our implacable enemy who became our ally after 9/11/2001. Then the current administration backed the Arab Spring which turned into the Arab winter.
I would concur with Army Chief of Staff Gen. Mark Milley's statement “Our sons and our daughters of this nation deserve good leadership.”
I agree with his statements that leaders must be competent, compassionate, and have tremendous character.
I disagree that “there’s no room for second place in combat.” In offensive, defensive, and intel gathering operations one subordinate unit accomplishes a mission first and secures the victory tactically or operationally. Other units are in supporting roles because we work as teams at the tactical and operational level and strategically we work with US Navy and USAF assets ass well as allies on occasion.
(1)
Comment
(0)

PO1 William "Chip" Nagel
4 y
That's why you got the College Degree, You're better with the Pretty Words.
(2)
Reply
(0)

LTC Stephen F.
4 y
PO1 William "Chip" Nagel - that is funny :-)
Actually I thank my Lord and Savior for helping me to express my thoughts. In my weakness He is strong.
(1)
Reply
(0)

PO1 William "Chip" Nagel
4 y
LTC Stephen F. - What little skills I have as a Professional, Technical Communicator I credit to TOPS (Telecommunications Managers School) and CTOCS Cleotha Fluitt my Instructor and His Green Pen. He used to just make my Correspondence Bleed Green but it was a great education.
(2)
Reply
(0)

SSG Derrick L. Lewis MBA, C-HRM
Posted 4 y ago
SFC Joe S. Davis Jr., MSM, DSL ,
With regards to combat, I concur. But not to all of life.
(1)
Comment
(0)
Read This Next
RallyPoint Home