Army leaders: Service must look to the future while training to fight today

SFC (Join to see)
6.11K
4
3
3
3
0
The Army must prepare for the future even as it trains to respond to the threats and contingencies facing the world today, the service’s top leaders said Monday.

“The Army is at an inflection point,” Army Secretary Eric Fanning said during a press briefing at the Association of the United States Army annual meeting. “Our soldiers are front and center in two wars in Iraq and Afghanistan. The Army is responsible for an increasingly diverse set of missions. I’ve seen first-hand how much we ask of our soldiers, our civilians and our families.”

But as the Army maintains its high operations tempo, it must also “modernize and realign,” Fanning said.

Army Chief of Staff Gen. Mark Milley, who appeared at the press briefing alongside Fanning, agreed.

“This year, what the secretary and I want to emphasize at this particular AUSA is the future of our Army, the deeper future,” he said. “It is my belief, as the chief of staff of the Army, after a year of close and rigorous study, we’re on the cusp of a fundamental change in the character of ground warfare.”

The Army doesn’t have to get it “exactly right,” but it has to “get it less wrong than any enemy if we’re going to prevail,” and the service must start now, Milley said.

“We’ve got to continue our focus on current readiness because those threats are here, they’re real, but we’ve got to do more to pick the pace up on our future readiness,” he said.

After 15 years of fighting in Iraq and Afghanistan, the Army must maintain the hard-earned lessons it learned in counter-insurgency and counter-terrorism operations, Milley said.

“We have to sustain that. We can’t not keep going with that capability,” he said. “But at the same time, we have to develop the capability to be able to present the president with options in the event of potential conflict with a higher-end threat, a near-peer competitor. You have to be able to do both of those simultaneously.”

In addition to training, the Army also is looking to speed up its modernization and acquisition. This includes Fanning’s creation of the Rapid Capabilities Office, designed to fill the gap between the Rapid Equipping Force, which fields off-the-shelf capabilities to warfighters at the unit level, and long-term major acquisition programs that can take 15 to 20 years.

The goal is for the Rapid Capabilities Office to “bring forward capabilities that maybe we have already or maybe we’re already working on, or the other services already have,” Fanning said, adding that combatant commanders are telling leaders that their “overmatch is diminishing” in a world where technology evolves more and more quickly every year.

Milley said he and other senior leaders in the Army support the creation of the Rapid Capabilities Office.

The Army’s acquisition process is “a very large process that is very bureaucratic,” Milley said. “It’s still very slow, and the system, left to its own devices, is in fact frustrating, slow and complicated. It is not designed for the world we are now entering.”

Fanning and Milley also talked about the importance of recruiting and retaining the best talent the Army can find.

“We have got to get more creative at making sure we find ways to capitalize and access the best ideas and talent,” Fanning said.

“The future operating environment against a near-peer higher-end threat is going to be intensely lethal, the likes of which the U.S. military has not experienced since World War II,” Milley said. “It’s likely to be non-linear, and it’s likely to be a non-contiguous battlefield, and your opponent is not only going to be competent, but he’s going to be elusive and ambiguous.” 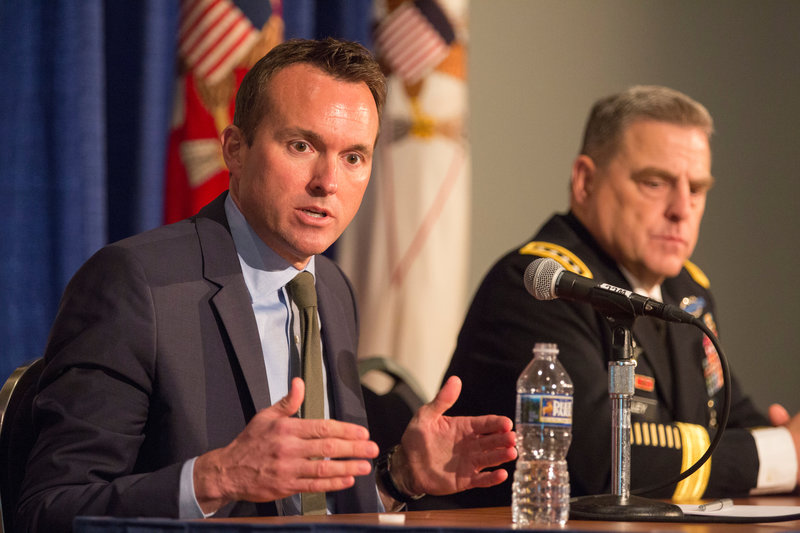 Army leaders: Service must look to the future while training to fight today

LTC Stephen F.
Posted 5 y ago
I almost fell out of my chair when I read this statement of the obvious SFC (Join to see). This concept has been applied for many decades and requires balancing expenditures and programmatic emphasis as risk to both current and future capabilities is managed.
(0)
Comment
(0)

SFC George Smith
Posted 5 y ago
well what was your first clue Sherlock... they need to get the Career Politicians out and the corrupt Lobbyist tossed into Prison... and get back to the real troop testing facilities where they can see hoe GI proof things really are...
(0)
Comment
(0)