After a week of intense competition, the Army has named its 2016 Drill Sergeants and AIT Platoon Sergeant of the Year.

Sgt. Ryan Moldovan is the Army Reserve Drill Sergeant of the Year. Moldovan is assigned to the 98th Reserve Training Division,

The soldiers were recognized Friday afternoon at an awards ceremony at Fort Jackson, South Carolina. Each received the Meritorious Service Medal.

All three soldiers also will move, likely sometime in the fall or winter, to the U.S. Army Drill Sergeant Academy at Fort Jackson, where they will work to help the Center for Initial Military Training shape the way the Army trains new soldiers.

The Drill Sergeant and AIT Platoon Sergeant of the Year event is a four-day, "best-of-the-best" contest that puts competitors through physical and mental tests, according to information from the Army.

Competitors must battle fatigue, weather and surprise events to earn the coveted titles. They must perform and instruct more than 50 tasks and drills, including unknown distance runs and foot marches, rappelling, orienteering, obstacle courses, physical readiness training and appearances before a board of command sergeants major to demonstrate their knowledge of leadership and training tasks.

While the competition is similar to other competitions across the Army, the event focuses on competitors’ ability to teach, as their day-to-day job requires them to effectively teach the Army’s newest soldiers.

This year, the Army’s top six drill sergeants -- four in the active Army and two in the Army Reserve -- competed for the coveted titles, as did nine AIT platoon sergeants .
Here’s a closer look at this year’s winners.

Delaney, 30, joined the Army in September 2007, training to become a military police soldier.

He has served in the 795th MP Battalion and 14th MP Brigade at Fort Leonard Wood, and the 82nd Airborne Division at Fort Bragg, North Carolina. He is currently a senior drill sergeant assigned to B Company, 787th MP Battalion.

“The way they have the majority of our exercises set up, you’re constantly rotating, so you have no idea how your competition is doing,” he said.

He also looked to his competition for motivation.

“It was great to be out there all week with 14 other like-minded noncommissioned officers,” Delaney said. “They all want to excel, they’re all putting the extra effort to be here. It was great.”

He’s also looking forward to his new assignment at the Drill Sergeant Academy.

“The main goal is to continue to develop and improve the drill sergeant program so we get the best training for soldiers entering the Army,” he said. “That’s the sole goal.”

Delaney has deployed twice to Iraq and once to Afghanistan.

His deployments include one tour in Germany in support of Operation Enduring Freedom and a deployment to Iraq.

“I had no idea who was going to be the winner,” Moldovan said. “I felt like I was doing really well, being ahead of the competition in many events, but you never know.”

Moldovan, who is a UPS driver in his civilian life, said he is “happy, relieved," that his hard work paid off.

At least since March, Moldovan has juggled training for the competition with his civilian job, family and home life.

“I put in so many hours, so many miles, so much studying,” he said. “There were times when I said to myself, ‘I don’t know how much longer I can do this,’ but I wanted it, and it paid off.”

Moldovan also credited his fellow NCOs for pushing him throughout the competition.

“As soon as I saw the other competitors, I knew it was a top-notch batch of NCOs, and I was going to have to put forth a lot of effort if I wanted to keep up with them,” he said. “It’s been an incredible experience. I’m happy to represent the Army Reserve and just show that soldiers in the Army Reserve as just as tough, just as dedicated and professional as the active component. That’s one of the things I came out here to prove.”

Laspe, 31, joined the Army in 2008. He completed basic combat training at Fort Knox, Kentucky, before going on to dive school at Fort Leonard Wood and Panama City Beach, Florida.
His assignments include the 74th Engineer Dive Detachment at Fort Eustis, Virginia. During his time with the unit, Laspe deployed to Kuwait to support Operation Enduring Freedom.

Laspe also has participated in missions for the Army Corps of Engineers in Pennsylvania, Florida, Louisiana, Morocco, Andros Island (part of the Bahamas) and Germany. He also has many dives in and around Fort Eustis in support of watercraft and transportation operations.

He is currently an AIT platoon sergeant with A Company, 169th Engineer Battalion, in Panama City, Florida. He represented Fort Leonard Wood, which is where his unit has its headquarters.

Laspe said he trained for six months for this competition, with “lots of studying, lots of physical preparation, lots of ruck marching.”

“When we first got here, you could instantly tell everybody here was a professional and very good at what they do,” Laspe said. “It was not an easy competition by any means.”

Laspe said he had “no idea” he’d won until his name was announced.

“I was excited and honored and humbled at the same time,” he said. “It’s very good to confirm that all the training you did is validated.” 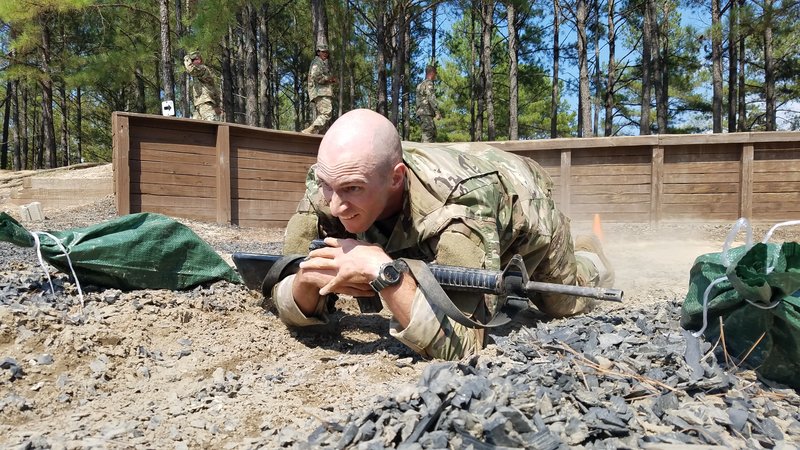