Suspect Russell Thomas Langford, 36, made death threats against members of the mosque about 20 miles southwest of Fayetteville, authorities said.

"He told people at the mosque that he would kill them and bury them behind the mosque," said Capt. John Kivett of the Sheriff's Office. "He brandished a weapon while he was on the property."

Langford, who lives in Fayetteville, was charged with ethnic intimidation, assault with a deadly weapon, going armed to terror the public, communicating threats, stalking and disorderly conduct, the sheriff's office said. Kivett said Langford is a major in the U.S. Army Reserve.

The series of threats began Thursday afternoon when the man insulted a mosque member doing construction work nearby and then left the packages of bacon at the entrance of the mosque, according to authorities and witnesses.

Advocacy groups say pork is often used to insult Muslims because their religion doesn't allow them to eat it. The Washington-based Council on American-Islamic Relations said the act constituted a desecration of the place of worship.

Witnesses say the suspect left and returned to the Masjid Al Madina mosque several times in his Chevrolet Tahoe, prompting tense moments inside while children sheltered in the back of the building. Authorities said there were no injuries.

At one point, the suspect followed one of the members home, according to a Hoke County Sheriff's Office news release. The person tried to evade him but couldn't.

A mug shot of Langford shows him with close-cropped hair, a tattoo resembling the U.S. flag on his right forearm and a green shirt emblazoned with a military-style rifle emblem.

Authorities found several handguns and other weapons, along with about 500 rounds of ammunition in Langford's vehicle, Kivett said. He said Langford didn't make specific threats about a mass shooting other than to say he wanted to kill mosque members.

Langford made his initial court appearance Friday, posted a $60,000 secured bond and was released to the custody of the Army at Fort Bragg, Kivett said.

The threats came during the Muslim holy month of Ramadan.

The Council on American-Islamic Relations said the man Langford followed home is himself a Muslim chaplain at Fort Bragg. Kivett said that resulted in the stalking charge. A message left for a man identified as the victim by mosque members wasn't immediately returned. The Washington group asked authorities to investigate the case as a possible hate crime and increase patrols around the area, especially during nighttime Ramadan activities.

A patrol car was parked outside the mosque Friday ahead of midday prayers. It sits just off a state highway between Fayetteville and Raeford.

"We've never had a problem with anyone," said Kamal Allan of Raeford. The mosque has been there for about three decades.

The general contractor and mosque member said he was leading a crew tearing down a nearby outbuilding when the suspect drove up in the late afternoon. Allan said Langford began insulting him and using expletives while asking white crew members, "Do you know who you're working for?"

Witness Abdu Alsaidi, another mosque member, said Langford left and returned several times. He said that police were called in the late afternoon, but they didn't arrest Langford until sometime after 8 p.m.

Alsaidi described tense moments inside the mosque. At one point while Langford was parked out front, members made children move to the back of the building for fear of an attack.

"Our life was on the line," he said. "The way he acted, he didn't care about anybody."

Copyright 2016 The Associated Press. All rights reserved. This material may not be published, broadcast, rewritten or redistributed. 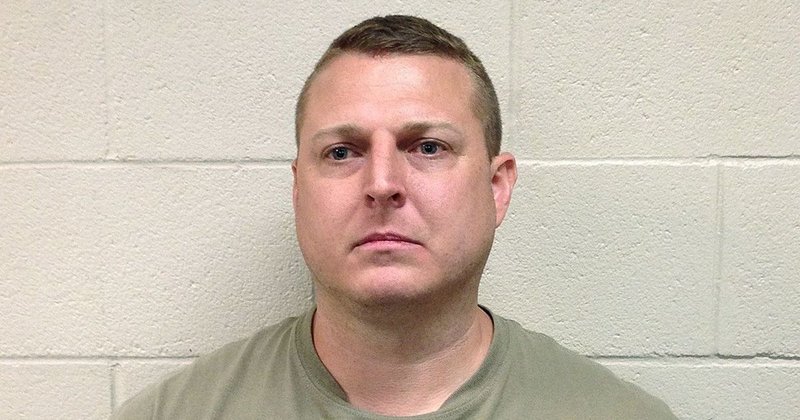 SFC Mike Huff
>1 y
yep now he can turn in his army blues and wear the white one with the hood he has in his closet!
(3)
Reply
(0)

SSG Warren Swan
Posted >1 y ago
Goes to show that bigotry is alive and well in the US. There was no excuse for what he did and I hope they throw not just the book, but the entire building at him. If we are telling folks we are a country that accepts YOU as YOU ARE, then we need to stand by that thought. Not pick and choose who's cool to come in and who's not. Should the investigation turn up anything that proves otherwise in the sense one of the parishioners did something to him, I would retract my statement.
(5)
Comment
(0)

Cpl Denis Dearborn
>1 y
Problem is, America has been selective of everything and continues to be, that's the liberal way. Let me ask, did you hear about the 7 Christians who were almost beaten to death this week in Dearborn MI? Nope..............How bout the gays who attacked a family who's teen kid was wearing a Christian T-shirt? Yup, surrounded them, exposed their genitalia at the family to include a 5 year old little girl and yet you hear ZERO, nada, nothing about it on the news.................How bout the 261 white males murdered by police so far thus year? How bout the fact that out of the 261 murdered by police, 193 of those were cases of black officers shooting unarmed white males yet no Ayatollah Obama on TV saying how America has a problem, nope, wrong skin color. I know this is off topic but I wish just once, just once that Barry, Barrack, Soetorro, Obama, whatever the hell the Ayatollah is calling himself these days would remember that he is not the first black anything, that he is Mulatto and maybe he could have used his almost 8 years of setting us back 100 years in racial relations to actually fight that garbage but, all the issue above, the reason you will never hear about them or all the cases where legally armed citizens defended their own lives, lives of their families, stopped crimes etc.... they do not sell and push liberal agenda, hatred and ignorance.
(0)
Reply
(0)

SSG Warren Swan
>1 y
Cpl Denis Dearborn - First thing...you're wrong. One oz of black in you makes you BLACK. This "I'm mixed bullshit" is just that... Bullshit. Slave codes that were enacted then, that are used today prove that is true. My last name isn't "my" last name, it was a means of identifying who was my "owner", so Swan would actually be "Swans Slaves". As far as being "pure" show me a Black man who is 100% pure, and I'll take his picture and show you what a liar looks like. Obama IS the first Black President. It does not matter what you or I think, it is what it is. Obama use his eight years to do what? Fight local battles that in many cases, the local PD does an outstanding job of investigating and dealing with offenders? You didn't hear about the brother of my ex being jumped did you? They thought he was a "Muslim" and all "Muslims" should get their asses beat over 9/11. Problem is, he's NOT Muslim, and he's NOT from the ME. He's an US citizen, and the family itself is from India. Did you hear about that? Did you hear about the Prince Georges County Police Officers who made up a Go Go band and actually go do local shows? They're damn good, they reach out to the youth, but it's a local thing, so unless you're from here, you probably don't know.
Resorting to calling President out of his name when you're trying to make a point, looses the point and turns the reader or listener off. Has nothing to do with PC or butthurt, but an articulate exchange of ideas in conversation. It also shows a sense of maturity and being above the pettiness of name calling. Expected from a five year old...not a grown man.
In regards to the media, minorities put butts in chairs. If you said Farook did this, and the next line is John did the same, Farook will catch the brunt of the anger, and the media outlets know that. That's why they're quick to throw everyone on the ISIS bus, even before the investigators mention it. There is no "liberal" or "conservative" agenda. Both are the same with the same end-goal in mind; control of power and money. That IS the agenda for both of them. Dress it up, give it a new name, and when broken down, it's the same crap.
(4)
Reply
(0)

Cpl Denis Dearborn
>1 y
I know, I am so sick of hearing about how this guy left all that bacon when so many homeless vets are going hungry.
(2)
Reply
(0)

MSG Floyd Williams
>1 y
What a waste of experience, time and energy. He could've been more productive in a positive by reaching out to struggling Soldiers suffering with PTSD, homeless Veterans, or both.
(0)
Reply
(0)
Show More Comments
Read This Next
RallyPoint Home