President Woodrow Wilson signed the National Defense Act of 1916, creating ROTC, and providing the leadership foundation for more than half-a-million second lieutenants over the past century to serve in the Regular Army, Army Reserve, and Army National Guard. The Army we’ve all come to know today would not exist as it does without the College and University ROTC program.

ROTC draws from the American well, representing the full fabric of the nation, with nearly 300 programs dispersed across all 50 states, including Guam and Puerto Rico. ROTC is also largely responsible for propelling the Army forward toward inclusion and diversity. This fusion of varied geographical backgrounds, ethnicities, religions, and career fields has contributed to making the United States Army a leadership powerhouse, and the most dominate land force the world has ever known.

The ROTC lineage is rich with trailblazers who set the path for the Army’s current success. For many, ROTC was the bridge between small beginnings and realized dreams. For me, it began on the campus of Virginia State University during the spring of my sophomore year. Virginia State introduced me to a world of endless possibilities; however, ROTC was the door to that new world. Now more than 35 years later, I am beyond humbled to stand alongside tremendous leaders, both in uniform and in the corporate sector, who also walked through the ROTC door.
Gen. George C. Marshall, Jr., led the way and was the first officer with ROTC roots. Preceding the formal creation of ROTC, he graduated from the Virginia Military Institute in 1901 and received a commission as a second lieutenant. General Marshall became the Army’s Chief of Staff on the same day that World War II began in Europe. Following his retirement from the Army, Gen. Marshall went on to win the Noble Peace Prize and serve as both Secretary of Defense and Secretary of State. Gen. Marshall set the standard for the thousands of officers who followed his footsteps to professional military education.

Another trailblazer, retired Gen. Colin Powell, the son of Jamaican immigrants, was the first African-American to serve as U.S. Secretary of State and the first African-American to serve as Chairman of the Joint Chiefs of Staff. General Powell found his calling through the ROTC program at the City College of New York. When asked by National Public Radio what would have been his career choice outside of the Army, he simply responded, “I’d probably be a bus driver.”

Today, the ROTC legacy remains strong as the 39th Chief of Staff of the Army Gen. Mark Milley, a graduate of Princeton University’s ROTC program, leads the best- manned, trained, led, and equipped Army in history, engaged in numerous named operations around the globe during an incredibly challenging and complex time.

ROTC is the source of commission for approximately 70 percent of the Army’s commissioned officers each year, and more than 40 percent of currently serving Active Duty Army General Officers found their beginnings in the ROTC program.

As our United States Army celebrates 100 years of leader-development success through ROTC, the complex world in which we live dictates that we must remain focused on building the next generation of military and civic leaders. Many forerunners built the bridge to ROTC’s success that we enjoy today, and now it is our turn to extend that bridge to the next generation.

Developing competent and confident leaders of character for our Army and the Nation requires a strong national commitment and strategic investment of time and resources. The past century of the Army ROTC program has a proven track record, and has demonstrated a positive return on the Nation’s investment.

I’m honored to join thousands of Americans in extending my congratulations to the U.S. Army ROTC program on a century of success in developing leaders for the defense of our nation. 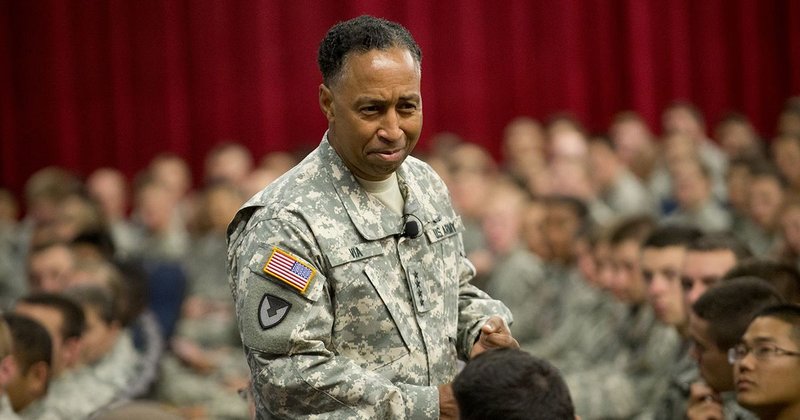 LTC John Griscom
Posted 2 y ago
Under current law, there are three types of ROTC programs administered, each with a different element.[18]
The first are the programs at the six senior military colleges (University of North Georgia, Dahlonega, Georgia; Norwich University, Northfield, Vermont; Texas A&M University, College Station, Texas; The Citadel; Charleston, South Carolina; Virginia Military Institute, Lexington, Virginia; Virginia Polytechnic Institute and State University (Virginia Tech), Blacksburg, Virginia), also known as military schools. These institutions grant baccalaureate degrees (at a minimum) and organize all or some of their students into a corps of cadets under some sort of military discipline. Those participating in the cadet program must attend at least 2 years of ROTC education.
The second are programs at "civilian colleges". As defined under Army regulations, these are schools that grant baccalaureate or graduate degrees and are not operated on a military basis.
The third category is programs at military junior colleges (MJC). These are military schools that provide junior college education (typically A.S. or A.A. degree). These schools do not grant baccalaureate degrees but they meet all other requirements of military colleges (if participating in the Early Commissioning Program) and cadets are required to meet the same military standards as other schools (if enrolled in ECP), as set by Army Cadet Command. Cadets can be commissioned as second lieutenants in the Army Reserve/Army National Guard as graduating sophomores. Upon commissioning, these lieutenants are required to complete their bachelor's degree at another institution (of the lieutenant's choosing) while serving in their units. Upon receiving their bachelors, ECP lieutenants can assess active duty and go onto active duty as a first lieutenant. Only the Army currently offers an Early Commissioning Program. In time of war, MJC's have played a significant role in producing officers for the Army. During the Vietnam war, the requirement to complete one's bachelor's degree was not in effect. Therefore upon commissioning, lieutenants went straight onto active duty.
One difference between civilian colleges and the senior or junior military colleges is enrollment option in ROTC. ROTC is voluntary for students attending civilian colleges and universities. However, with few exceptions (as outlined in both Army regulations and federal law) it is required of students attending the senior and junior military colleges. Another major difference between the senior military colleges and civilian colleges is that under federal law, graduates of the SMCs are guaranteed active duty assignments if requested with the approval of the school's professor of military science.
(2)
Comment
(0)