Battered Biden under siege as crises confound the White House

Memo to President Biden: Life moves pretty fast, and now the world is on fire.

Israel is erupting, Americans are utterly confused when masks should be worn for COVID-19 protection and then there are the agita-inducing long lines for gasoline.

And that was just Tuesday.


A lot has changed in a matter of days.

Friday was supposed to be a glorious day for Biden. The latest employment numbers were set to be released, and economists were gushing that a million new jobs had likely been created in April by exuberant employers and their newly vaccinated workers.

His team no doubt was prepared to unleash Biden to perform a little victory dance at the White House celebrating the stupendous number. But the show had to be hastily revamped when the actual tally came in nearly three-quarters-of-a-million jobs lower than expected; just 266,000 jobs created and unemployment unexpectedly rising to 6.1%.

"You might think we should be disappointed," Biden said, which was indeed something people might think. But the American Rescue Plan he signed into law in March "was designed to help us over the course of a year — not 60 days," he said.

Far from being a disappointment, a jobs report that included 734,000 jobs fewer than expected was good news.

"Today, there is more evidence our economy is moving in the right direction," Biden said. "This is progress. This is a testament to our new strategy," he said. "We've got work to do, to state the obvious, we have work to do."


The jobs figures were just the first in a series of out-of-nowhere body blows the president was to be pilloried with during a remarkable five days of bad developments that stretched from Israel to the Mexican border and up the East Coast via the Colonial Pipeline.

After delivering a few remarks Friday, taking in the "Weekly Economic Briefing" and meeting with his "Jobs Cabinet," the president knocked off at 5:45 pm and headed for the peacefully wooded Catoctin Mountain Park, where the presidential refuge Camp David awaited in Maryland.

He was ready for a rest, but the world wasn't ready to give him one.

By Saturday morning, the Colonial Pipeline, which transports nearly half of the East Coast's fuel supplies up from Texas, had been turned off, the victim of a ransomware cyberattack by a group of nasty hackers who, by the way, might be working with the Russian government. Biden was "briefed" on the situation Saturday morning.

By late Monday, more than one in 20 gas stations in Virginia was out of fuel. Tuesday, governors throughout the Southeast were declaring states of emergency, and the Biden administration was begging drivers not to hoard gasoline.

BIDEN REACTS TO WEAK JOBS REPORT, SAYS US 'STILL DIGGING OUT OF AN ECONOMIC COLLAPSE,' BUT ON 'RIGHT TRACK'

Meantime, Palestinians had begun violently clashing with Israeli police at the Al-Aqsa mosque in Jerusalem, an escalation of tensions that had been simmering and occasionally boiling over for weeks. Hamas began launching rocket attacks into Israel, which responded by bombing Gaza.


Back in Washington, Republicans began accusing Biden of tilting too far toward the Palestinians while failing to at least verbally sock it to Hamas. From the other side, leftists in his own party hit the White House for supposedly coddling Israel, with Rep. Rashida Tlaib, D-Mich., accusing Biden of "enabling" Israel with foreign aid.

By Tuesday, an echo of the violence had spread to the streets of New York, where there were dustups between pro-Israel and pro-Palestinian supporters in front of the Israeli consulate.

As new crises broke out all over the place, there were searing reminders that an old one was still festering.

U.S. Customs and Border Protection revealed Tuesday that migrant encounters jumped yet again this past April: over 178,000 in all, nearly a tenfold increase from 2020 and still above levels seen in the 2019 surge at the Mexico border.

In a heartbreaking scene, five unaccompanied migrant girls were found abandoned by a Texas farmer on his land. And reports emerged that border agents in Texas had seized $4.6 million in methamphetamine and cocaine, while a member of the National Guard had found an abandoned bag of "AK-47-style pistols" in the border region.

A new poll reminded the president that the border crisis was dragging him down, with only 43% of those surveyed approving of his immigration policy.

In a bit of beguiling partisan moves that has befuddled many Americans, Senate Democrats pressed ahead Tuesday with their plans to overhaul the nation's election laws -- after many states, such as GOP-guided governments in Florida and Georgia, enacted different changes for their own constituents. Divisive racial undercurrents have developed amid all this, all on the watch of the so-called unity president.

The ACLU quickly weighed in to tie new voting laws to race: "This terrible bill was drafted as a direct swipe at Georgians’ participating in the Black Lives Matter protests who are asserting for their constitutional rights," Andrea Young, executive director of the ACLU of Georgia, said in a statement posted on the group's website.

On the COVID-19 front, the once-unimpeachable Centers for Disease Control and Prevention was taking shots on the chin for some dubious recommendations to a populace ready to get back to normal.

"I used to have the utmost respect for the guidance from the CDC. I always considered the CDC to be the gold standard. I don’t anymore," Collins said, giving examples where she said she thinks "the conflicting, confusing guidance from your agency has undermined public confidence and contradicts the scientific guidance of many experts."

"Unnecessary barriers to reopening schools, exaggerating the risk of outdoor transmission and unworkable restrictions on summer camps," Collins continued. "Why does this matter?


To add insult to the various injuries, there was even criticism of how Biden looked — at least when he was wearing a mask.

"Is it really necessary for a fully vaccinated person to wear a mask at a limited indoor gathering if everyone there is vaccinated?" Tapper wanted to know. "Why does President Biden in a room full of vaccinated journalists, everybody in that room vaccinated, why does he need to wear a mask?"

Zients mumbled something about following CDC guidance and all Americans being eligible for shots.

By Tuesday, Biden was hearing from Utah Republican Gov. Spencer Cox that fully vaccinated people should start acting like it so that Americans could see the benefits of the vaccine and go get their arms jabbed.

"One area where we could use some help from the White House and others is modeling what a fully vaccinated person can do," Cox said. 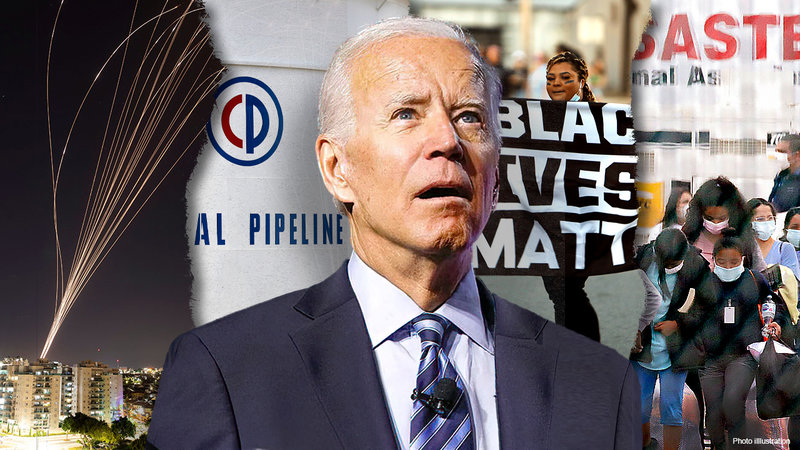 Battered Biden under siege as crises confound the White House

Office of the President (POTUS)
Posted 9 mo ago
Responses: 10

Lt Col Charlie Brown
Posted 9 mo ago
His handlers have screwed it all up. This is not Biden, he doesn't have the capacity for this.
(7)
Comment
(0)

SFC (Join to see)
9 mo
President Biden has always been an empty vessel who only cares about 2 things: money and power. MHO
(3)
Reply
(0)

SGT Joseph Gunderson
Posted 9 mo ago
The entire administration doesn't have two functioning nuerons in the lot. These people are the embodiment of ineptitude.
(6)
Comment
(0)
show previous comments

MSgt Steve Sweeney
9 mo
SGT Joseph Gunderson - I refer you to the original response as you seem to be talking in circles. I do find it amusing that you are operating under the impression that you possess a superior intellect and erudite grasp of the issues. They actually have a name for your condition. Quite common among Trump supporters.
(1)
Reply
(0)

SGT Joseph Gunderson
9 mo
MSgt Steve Sweeney no, at present, I'm working from the certain knowledge that you're a moron, and I'm not wasting anymore time responding to your brand of stupidity.
(1)
Reply
(0)

MSgt Steve Sweeney
9 mo
SGT Joseph Gunderson - Why Joseph, are we cross? Why, if I didn't think you were my friend, I don't know if I could bear it...

Have you ever considered that maybe you are the moron? Of course you haven't. I doubt you posses the courage for such a degree of self-awareness. So by all mean, be off with your delusions of adequacy. Don't let the door hit you.
(1)
Reply
(0)

Lt Col Scott Shuttleworth
Posted 9 mo ago
YEAH...ONLY 1400 more days left in this Presidency...SARCASM!!! Wonder what ole sleepy Joe and our MIA VP will screw up next? People didn't like Trump because of his mouth and his tweets...well, I will take his tweets and his loudmouth along with his verifiable positive actions for the US over someone destroying our country from within and attempting to turn us into a socialistic state!
(4)
Comment
(0)

SFC (Join to see)
9 mo
It will be interesting to see the last 3.5 years of the Biden Administration. To be fair President Trump’s Administration was tested many times in its early days when it didn’t look good. Listening, creating good policies, hiring good people and getting rid of them when they didn’t produce, and great negotiation skills allowed President Trump to turn our country around. I just don’t see that kind of talent in President Biden. I hope I am wrong.
(2)
Reply
(0)

In Bidens 60 days again only 60 days...inflation going up up and up, crisis at the borders, tearing down solid infrastructures that people use to get to work, a CDC that can't put out the right COVID message, continuously giving stimulus checks so people don't want to go back to work...starting the Trump wall up again...middle east erupting in fighting and so on and so on.

I do get a check every month and yo as anyone also as a retired service member spent many months, days, and years away from family breathing in burn pits and running convoys and bases in far away places and numerous health issues due to my service...that isn't socialism, that was earned!!! Before you use a term you might want to fully understand the definition...

so·cial·ism
/ˈsōSHəˌlizəm/
noun
a political and economic theory of social organization which advocates that the means of production, distribution, and exchange should be owned or regulated by the community as a whole.

Yes Trump was a loudmouthed rat B as a person that couldn't keep his mouth shut and tweeted like a moron IMHO put he did what he said he was going to do and started turning this country around with verifiable actions all in the midst of the left spending millions of dollars trying to destroy him...and in less than 60 days, Biden has thrown it in the crapper.
(0)
Reply
(0)

SSG Robert Webster
6 mo
Lt Col Scott Shuttleworth As of 8/15/2021, you have two/three answers. Two of them are actually combined - the compound failure at the southern border in regards to illegal immigration and the spread of the SARS-CoV-2 virus. And our ignominious departure from Afghanistan.
What was it that GEN Milley stated not more than two months ago - “A negative outcome, a Taliban automatic military takeover, is not a foregone conclusion,” Mark Milley, America’s most senior soldier, intoned last month while reiterating America’s support for the embattled Afghan government."
(1)
Reply
(0)
Show More Comments
Read This Next
RallyPoint Home