SGT (Join to see)
2.34K
23
4
14
14
0
On October 3, 42 BC, the First Battle of Philippi: Triumvirs Mark Antony and Octavian fight an indecisive battle with Caesar's assassins Brutus and Cassius. From the article:

"First battle
Antony offered battle several times, but the Liberators were not lured into leaving their defensive position.[6] Antony tried to secretly outflank the Liberators' position through the marshes in the south.[6] With great effort he was able to cut a passage through the marshes, throwing up a causeway over them.[6] This manoeuvre was finally noticed by Cassius, who countered by moving part of his army south into the marshes and constructing a transverse wall in a bid to cut off Antony’s outstretched right wing.[6] This brought about a general battle on 3 October 42 BC.

Antony ordered a charge against Cassius, aiming at the fortifications between Cassius's camp and the marshes.[3] At the same time, Brutus's soldiers, provoked by the triumvirs' army, rushed against Octavian’s army, without waiting for the order of attack, which was to be given with the watchword "Liberty".[3] This surprise assault had complete success: Octavian’s troops were put to flight and pursued up to their camp, which was captured by Brutus’s men, led by Marcus Valerius Messalla Corvinus.[7] Three of Octavian’s legions had their standards taken, a clear sign of a rout.[7] Octavian was not found in his tent: his couch was pierced and cut to pieces.[7] Most ancient historians say that he had been warned in a dream to beware of that day, as he wrote in his memoirs. Pliny bluntly reports that Octavian went into hiding in the marsh.[7]

However, on the other side of the Via Egnatia, Antony was able to storm Cassius’ fortifications, demolishing the palisade and filling up the ditch.[3] Then he easily took Cassius’s camp, which was defended by only a few men.[3] It seems that part of Cassius’s army had advanced south: when these men tried to come back they were easily repulsed by Antony.[3]

Apparently the battle had ended in a draw. Cassius had lost 8,000 men, while Octavian had about 16,000 casualties. The battlefield was very large and clouds of dust made it impossible to make a clear assessment of the outcome of the battle, so both wings were ignorant of each other's fate. Cassius moved to the top of a hill, but could not see what was happening on Brutus’s side. Believing that he had suffered a crushing defeat he ordered his freedman Pindarus to kill him.[7] Brutus mourned over Cassius’s body, calling him "the last of the Romans". He avoided a public funeral, fearing its negative effects on the army morale.

Other sources credit the avarice of Brutus' troops as the factor that undid their definitive victory on October 3. Premature looting and gathering of treasure by Brutus's advancing forces allowed Octavian's troops to re-form their line. In Octavian's future reign as Emperor, a common battle cry became "Complete the battle once begun!"

Second battle
On the same day as the first battle of Philippi, the Republican fleet was able to intercept and destroy the triumvirs' reinforcements of two legions and other troops and supplies led by Gnaeus Domitius Calvinus. The strategic position of Antony and Octavian became perilous, since the already depleted regions of Macedonia and Thessaly were unable to supply their army for long, while Brutus could easily receive supplies from the sea. The triumvirs had to send a legion south to Achaia to collect more supplies. The morale of the troops was boosted by the promise of a further 5,000 denarii for each soldier and 25,000 for each centurion.

On the other side the Liberators’ army was left without its best strategic mind. Brutus had less military experience than Cassius and, even worse, he could not command the same respect from his allies and his soldiers, although after the battle he offered another gift of 1,000 denarii for each soldier.

In the next three weeks, Antony was able to slowly advance his forces south of Brutus’s army, fortifying a hill close to Cassius’s former camp, which had been left unguarded by Brutus.

To avoid being outflanked Brutus was compelled to extend his line to the south and then the east, parallel to the Via Egnatia, building several fortified posts. While still holding the high ground he wanted to keep to the original plan of avoiding an open engagement and waiting for his naval superiority to wear out the enemy. The traditional understanding is that Brutus, against his better judgment, subsequently abandoned this strategy because his officers and soldiers were tired of the delaying tactics and demanded he offer another open battle. Brutus and his officers may have feared that their soldiers would desert to the enemy if they appeared to have lost the initiative. Plutarch also reports that Brutus had not received news of Domitius Calvinus' defeat in the Ionian Sea. When some of the eastern allies and mercenaries started deserting, Brutus was forced to attack on the afternoon of October 23. As he said "I seem to carry on war like Pompey the Great, not so much commanding as commanded." However, the reality is Brutus that had no option but to fight, because his entire position was now in danger of being isolated and rendered untenable. If the triumvirs were allowed to continue stretching their lines unimpeded to the east they would ultimately cut off his supply route to Neapolis and pin him against the mountains. If that happened, the tables would be turned; Brutus would either be starved into submission or be forced to retreat by taking his entire army via the hazardous northern trail that had brought him to Philippi.

The battle which ensued resulted in close combat between two armies of well-trained veterans. Ranged weapons such as arrows or javelins were largely ignored; instead, the soldiers packed into solid ranks and fought face-to-face with their swords, and the slaughter was terrible. According to Cassius Dio, the two sides had little need for missile weapons, "for they did not resort to the usual manoeuvres and tactics of battles" but immediately advanced to close combat, "seeking to break each other’s ranks". In the account of Plutarch, Brutus had the better of the fight at the western end of his line and pressed hard on the triumvirs’ left wing, which gave way and retreated, being harassed by the Republican cavalry, which sought to exploit the advantage when it saw the enemy in disorder. But the eastern flank of Brutus’s line had inferior numbers because it had been extended to avoid being outflanked. This meant Brutus’s legions had been drawn out too thin in the center, and were so weak here they could not withstand the triumvirs’ initial charge. Having broken through, the triumvirs swung to their left to take Brutus in his flank and rear. Appian speaks of the triumvirs’ legions having "pushed back the enemy’s line as though they were turning round a very heavy machine."[4] Brutus’s legions were driven back step-by-step, slowly at first, but as their ranks crumbled under the pressure they began to give ground more rapidly.[4] The second and third reserve lines in the rear failed to keep pace with the retreat and all three lines became entangled. Octavian's soldiers were able to capture the gates of Brutus’s camp before the routing army could reach this defensive position. Brutus’s army could not reform, which made the triumvirs’ victory complete. Brutus was able to retreat into the nearby hills with the equivalent of only 4 legions.[4] Seeing that surrender and capture were inevitable, Brutus committed suicide.[4]

The total casualties for the second battle of Philippi were not reported, but the close quarters fighting likely resulted in heavy losses for both sides. 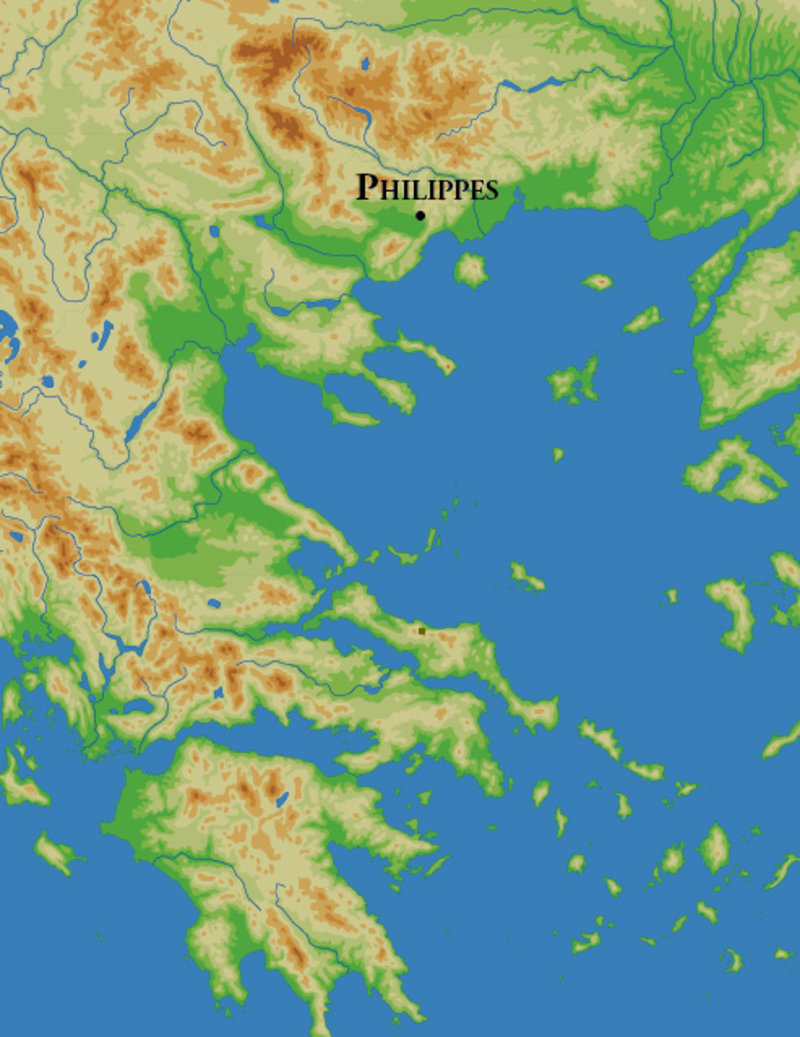 LTC Greg Henning
Posted 3 y ago
SGT (Join to see) There is a great series of videos on Caesar on Netflix that covers his whole life.
(4)
Comment
(0)