A little more than three years later, Antal pulled the plug himself.

Now a captain in the Army Reserve, Antal resigned his commission in a letter to President Obama (via Army Human Resources Command) last month, citing opposition to the administration’s use of drone strikes, its policy on nuclear proliferation, and what he called the executive branch’s claim of “extraconstitutional authority and impunity for international law.”

“I could have gone quietly, I realize that,” Antal said Friday in an interview near his Wappingers Falls, New York, home, about a 40-minute drive north from West Point.

“But I decided to submit a resignation in protest because I want to use the opportunity to raise public awareness, to generate a public conversation, and to hold the administration accountable.”

Antal’s resignation remains in process, Capt. Eric Connor, a spokesman for Army Reserve Command, said in a statement. Antal said his unit, the 354th Transportation Battalion, was drilling Friday, but that after some conflicting orders from the unit and Chaplain Corps leadership, he was not expected to attend.

"We would hope that all of our talented soldiers would want to continue serving this great nation and not resign their commission, but if they choose to do so, all service members are encouraged to follow the proper procedures we have in place for such actions,” Connor said.
Antal intends to continue ministering to troops, but in his position as a part-time chaplain with the Veterans Affairs Department, working in Philadelphia. He’s held that position for several months, despite the long commute, calling it “incredibly rewarding.”

“If I didn’t have that, I think I would’ve stayed in the military longer,” he said. “I feel passionate about addressing the pain that so many of our veterans are carrying. I’ve found another avenue to do that, as a VA chaplain. I’m not walking away from the pain.”

He is walking away from uniform, however. And it’s not the first time he’s considered doing so.

Antal never thought about military service until he was serving as a missionary in South Korea at the time of the September 11 terrorist attacks. He wanted to contribute to the war effort and saw his faith as the right way to make that contribution.

He soon ran into a problem – a self-described pacifist in his younger years, Antal had refused to register for Selective Service. He thought that would scuttle his military career, as did his recruiter, but years later, after reading about a chaplain shortage, he tried again, this time with the New York National Guard.

“They offered me the option to request a waiver, so I did,” he said. “It took a few years for it to be granted, but eventually I was granted a moral waiver – to serve as a
Four years later in 2012, after being activated and sent to Kandahar, Afghanistan with 101st Expeditionary Signal Battalion, the minister found himself “in a U.S. Army uniform, with a flag on my right shoulder and a cross on my chest in a Muslim country, thinking, ‘My God, how did I get myself into this?’ “

Antal established a small gathering of Unitarian Universalists at the base on Sundays, in addition to other chaplain duties, and would change his career course about two months after landing in country, when he delivered a sermon he called “A Veterans Day Confession for America,” which he also posted on a religious-outreach blog. Some passages:


•“We have made war entertainment, enjoying box seats in the carnival of death …”
•“We have made our veterans into false idols, blood sacrifice on the National Altar of War.”
•“We have sanitized killing and condoned extrajudicial assassinations: death by remote control, war made easy without due process …”

He posted the sermon online so other ministers could draw from it for their Veterans Day remarks, he said – a difficult topic for many clergy, especially those with Unitarian Universalist flocks that may skew anti-war.

His superiors did not agree with his tactics. An Article 15 investigation began with Antal still in theater and ended in January, with a general officer memorandum of reprimand from Brig. Gen. Scottie Carpenter, head of 311th Sustainment Command. Carpenter called Antal’s sermon “a politically inflammatory message,” chastised the chaplain for “outrageous remarks” and offered “serious concerns as to whether you possess the qualities needed for continued service as a commissioned officer.”

Antal successfully lobbied to have the letter filed locally, kept outside his Official Military Personnel File in a move that could save his career. But his next officer evaluation report mentioned the reprimand, effectively including it in his permanent record, and included a “do not promote” recommendation.

“I thought, ‘F—k the Army,’ ” he said. “And I was just going to resign. I consulted with some of my closest colleagues, as well as my congregation. … I had a lot of support from people who thought I should stay in, that I should push back.”
Antal refused to sign his OER. He enlisted the help of New York Sen. Kirsten Gillibrand, and after months of paperwork and a move from the Guard to the Individual Ready Reserve, he was assigned to a chaplain detachment in the Army Reserve and promoted to captain in May 2014.

About a year later, he was moved to his current Reserve unit. In March 2015, he also became the minster for the Unitarian Universalist Congregation at Rock Tavern.

The investigations were over, but the causes Antal championed hadn’t gone away. A 2016 report card on U.S. drone use by the Stimson Center said the government had done next to nothing to improve accountability for or oversight of the drone program. In a 2015 opinion piece for a local newspaper, Antal wrote that drones "make killing too easy; and just because we can, does not mean we ought."

The chaplain’s hope that the administration would scale back on nuclear weapons took a serious hit with the launch of the long range standoff, or LRSO, missile program, an Air Force project capable of delivering nuclear payloads.

Antal, who visited Hiroshima and Nagasaki on the 70th anniversary of the atomic bomb drops and delivered a personal written apology to survivors of the blasts, said in his resignation letter that he “refuse to support this policy of terror and mutually assured destruction,” and that U.S. drone use amounted to “unaccountable killing.” 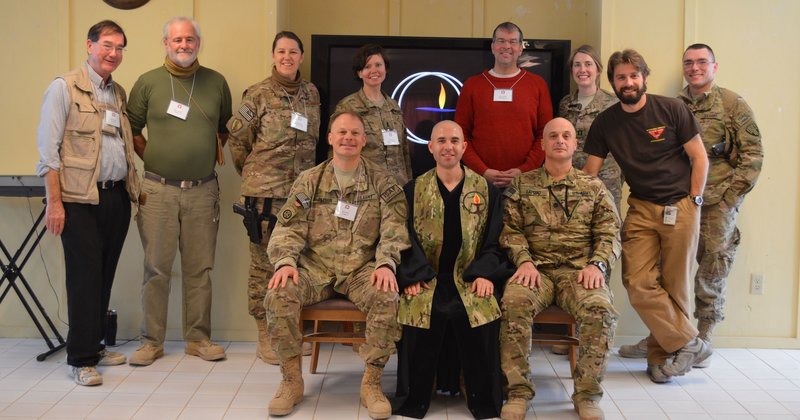 Office of the President (POTUS)
Posted >1 y ago
Responses: 7

CPT Jack Durish
Posted >1 y ago
Matters of conscience are best left there. As soon as we begin to debate with ourselves out loud, the chinks in our armor are exposed. Take for example "We have made our veterans into false idols, blood sacrifice on the National Altar of War". I'm glad I didn't say that. “We have made war entertainment, enjoying box seats in the carnival of death …” Many would argue that exposing the public to the horrors of war has done more to dissuade public opinion from supporting war. “We have sanitized killing and condoned extrajudicial assassinations: death by remote control, war made easy without due process …” He would prefer putting our children in harm's way as they defend us from terrorists?
(2)
Comment
(0)

PO1 William "Chip" Nagel
Posted >1 y ago
Interesting to say the least. Sounds like a True Man of God but confused why he donned the Uniform in the first place.
(1)
Comment
(0)

PO1 William "Chip" Nagel
>1 y
The only one less likely as a Military Chaplain than a Unitarian Universalist would be a Quaker.
(0)
Reply
(0)

CW4 (Join to see)
Posted >1 y ago
How is using a hellfire shot from a Pred or Gray Eagle any different from one shot from an F-16 or B1? The target has no idea where it came from. Of all the problems with the Army / Military this is his choice? "The Drone Program"? The Army should have never let a self-proclaimed pacifist in to begin with.
(1)
Comment
(0)
Show More Comments
Read This Next
RallyPoint Home