SFC (Join to see)
1.96K
14
7
7
7
0
As he prepares to move on after 18 years as the president of the Association of the United States Army, retired Gen. Gordon Sullivan has one regret.

As the Army emerges from almost 15 years of war in Iraq and Afghanistan and faces ongoing budget cuts, the service is set to shrink to about 980,000 soldiers — in all three components — by fiscal 2018. Sullivan, and other Army leaders, have warned that the Army is being cut too deep, even as it is being called upon to do an increasing number of missions at home and overseas.
“It’s a very competitive environment for money,” Sullivan said. “We tried, and we’re going to keep trying under Gen. Ham. We can’t do what we’re being asked to do with as few soldiers as we seem to be driving ourselves to.”

Sullivan, a former Army chief of staff, also said he is deeply concerned about preserving the pay and benefits offered to service members. He decried the “constant water torture of drip, drip, drip, every year we have the new, latest twist on retirement or medical or this or that to pay some other bill.”

“I can think of no more of a deserving group than the less than 1 percent of the American people who serve our country with an expectation or the knowledge that someday they may, in fact, give up their life for their country,” he said. “I, for the life of me, don’t get why there is such a concerted attack on the pay and benefits and the support for these young people. It eludes me.”
But Sullivan remains optimistic, and he has no plans to stop speaking out even after leaving AUSA, he said.

“I sound like a broken record, but I think the job that I’ve had here for 18-plus years has been to tell the story of the Army and to do my best as an outside voice to express what I think the Army needs,” he said. “I’m going to keep shooting my mouth off because I think it’s the right thing to do, and I think it’s the wrong thing to do to keep nipping away at benefits and pay.”
Sullivan, 78, will go on to serve as chairman of the board of the Army Historical Foundation, where he will focus his efforts on building the Army museum on Fort Belvoir, Virginia. Ham, a former commander of U.S. Africa Command, will take over Friday as president of AUSA, an influential nonprofit educational organization that supports the Army and advocates for the service on Capitol Hill.

Sullivan sat down June 15 with Army Times to reflect on his tenure at AUSA and share his outlook on the way ahead for the Army.

An aggressive Russia, North Korea and the Islamic State group are among the top challenges facing the Army today, Sullivan said.

He applauded Army Chief of Staff Gen. Mark Milley for focusing on building readiness, even as soldiers are deploying to support operations, training and exercises in Europe, Iraq, Afghanistan, the Pacific and Africa.

“The Army looks like a professional army that is, in a sense, recovering from 15 years of war in Afghanistan and Iraq, at least recovering as much as they can personally and professionally, and they’re beginning to look to the future where there are some threats that are emerging, such as Russia,” Sullivan said.

Russia has proved to have a “well-disciplined army, and, from everything I’ve read, pretty competent,” Sullivan said. “It’s much different than the Russian army of 1995.”

Size of the Army

Sullivan recounted a recent visit to World War I battlefields and the move, after the war, to shrink the Army, leaving it unprepared for World War II. He said he fears the same is happening again.

“It’s almost like we just can’t bring ourselves to understand that we need to protect ourselves,” he said.
Sullivan said there should be more than 500,000 soldiers in the active Army, and another 500,000 or so in the Army National Guard and Army Reserve.

“It’s hard to visualize what the future holds,” he said. “We have the North Korean threat, we have ISIS with its global reach.”

“My take is the troops seem pretty satisfied with what they’re doing,” Sullivan said. “They don’t like sitting in garrison, so they’re getting deployed or training to deploy. Many of the places they’re deploying to, they’re not being shot at, which is welcome.”

One of Sullivan’s biggest concerns, he said, is “they keep eroding the benefits” provided to the troops.

“The people we need, the midgrade officers, the midgrade [noncommissioned officers], who have combat experience, who’ve had years of experience leading young people in crisis situations, will become so fed up with the lack of support for their pay and benefits that they’re just going to wash their hands of it,” he said. “I worry about that.”
His 18 years at AUSA

“The people around me, certainly here and in the Army, I think they make people like me look better than we are,” he said. “I’m very fortunate to be around those people.”

Sullivan said he is proud of what AUSA has accomplished while he has been its president. This includes growing its online and social media presence, increasing professional development opportunities for its members, advocating for the Army on Capitol Hill, bringing to the forefront issues such as the budget and pay and benefits, and growing AUSA’s 120 local chapters across the country.

AUSA also has expanded its family program, tripled the size of its annual meeting in Washington, D.C., and built its partnerships with the defense industry.

“We’re not out here inventing a new infantry squad. That’s for the Army to do,” Sullivan said. “Our business is to tell the Army story, and it is a proud story, one of service and sacrifice for the country, just like it’s been for 241 years.”

Sullivan said he remains “as proud of the Army as I have ever been,” hailing it as a critical member of the joint team.

“I believe it takes a balanced force like that to protect and defend the United States of America, because it can’t be done by one service alone,” he said.
Final thoughts

Retiring from AUSA is just “another chapter of my life,” Sullivan said.

“I think it’s time to get younger leadership here, and Gen. Ham is the perfect man for the job. He’s got a life of experience both as an enlisted man and then an ROTC graduate with a distinguished record in uniform. He’ll have an equally distinguished record here, probably better than me, and I’ll be his biggest cheerleader.”

Sullivan said he will miss the “hustle and bustle of it all,” however.

“I’m leaving, but I’m not leaving with my head bowed,” Sullivan said. “We gave it our best shot. Another chapter closes, and I feel pretty good about it.” 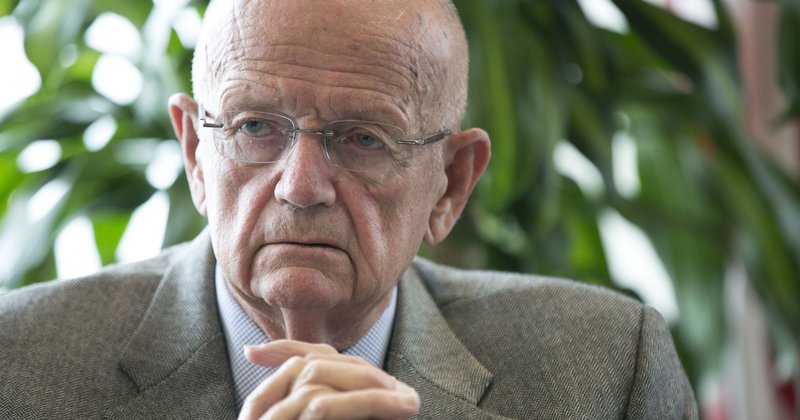