Deprivation and Despair: The Crisis of Medical Care at Guantánamo

This is a complete sham. This is Political arson. Since DAY ONE detainees at the US military detention facility at Guantanamo Bay, Cuba, have received world class military medical care (on par with what is offered to US military personnel - the threshold of the Geneva Conventions and Law of War).

As the ranking US Army Medical Department officer with the Joint Detention Operations Group, Joint Task Force 160, from FEB-JUN 2002, the International Committee of the Red Cross physicians I worked with there and later in Iraq, told me, "No one does [detention operations] better than the US."

My main beef there as a medical administrator and command consultant was that the medical care for US personnel was far INFERIOR to that afforded the detainees!

We dealt with many more complex issues in the beginning than there are now. With over 250 detainees by the time we transferred them all from spartan Camp X-Ray to the improved Camp Delta in late April of 2002, with issues from fresh battle wounds, exfixators, tuberculosis, broken bones, missing limbs, eye surgeries, mental health issues, nutrition, thirst and hunger strikers, paranoia, geriatrics, and general aloofness towards modern western medical care it's wonder we didn't lose anyone in those early days.

We treated detainees not at the modern fixed Guantanamo Bay Naval Hospital (as detainees were forbidden there due to PR issues with the locals), but at the mobile Fleet Hospital 20 (think navy M*A*S*H unit). This portable hospital came with connecting lined and air-conditioned tents and ISO units (think modified 20' shipping containers). ISO's held special medical services such as surgical, lab, pharmacy and x-ray. We had a negative pressure ward for contagious detainees, ICU wards, pre-op and post-op, general wards, physical therapy, etc. In other words, a fully functioning military hospital.

Military medical personnel are trained to treat enemy casualties with the SAME care and treatment as good-guys, and from my daily observations at the Fleet Hospital, and from medical INTEL reports from the camp, things could not have been better for the unlawful combatants.

There was also vision care, where glasses could be fabricated for detainees within an hour of the examination.

One of the complications at Gitmo then and probably to this day, is the difference in cultural acceptance of western medicine. MANY detainees would REFUSE to take their prescribed medications, or stop taking the prescribed dosages. Trouble-makers in the camp would tell the detainees that if they took the medication it would kill them, or it would make them pliable in interrogations. This was also the case in Iraq. To most detainees, modern medications were not to be trusted, and if they were, the culture was to stop taking them as soon as they felt better.

Needless to say this would severely complicate treatment.

Even in the early days, with detainees not suspected of war crimes, we were not interested in hanging onto severely sick or injured detainees. The very first detainee to be repatriated back to Afghanistan was a cold turkey heroin addict and an off-his-meds schizophrenic we called Wild Bill, because of his displays of bizarre behavior. Abdul Razeq told us on the way to his freedom bird through an interpreter that he picked up an AK-47 on the streets of Kanduhar from the Taliban in order to support his heroin addiction. After several weeks he was diagnosed and then it was determined that he was no longer an intelligence asset nor a threat to the United States.

A few weeks after his release we saw an article on line about him from NBC.com, in which he talked about how well we treated him! That was a flash in the pan!

731 detainees have been RELEASED from Gitmo, and NONE have been executed, beheaded, blown up, hacked to death, drowned, hung or burned alive, all things our enemies have done to us and/or our allies.

From their first day at Gitmo to their last, world class medical care has been provided for nearly every imaginable ailment or injury.

If there is a concern about the health of an unlawful combatant at Gitmo, the professional, experienced and capable military medical personnel there can handle it. We can also ship in necessary medical equipment and specialists, as we did in 2002 when a detainee required a CAT scan.

Unfortunately, Just Security is misinformed and uninformed about the capabilities and the quality professional medical care privided at Gitmo. So how about we let the experts on the ground determine what's needed and what's appropriate instead of trying to manipulate the political will of the United States - the finest military medical and detention operation in the world. 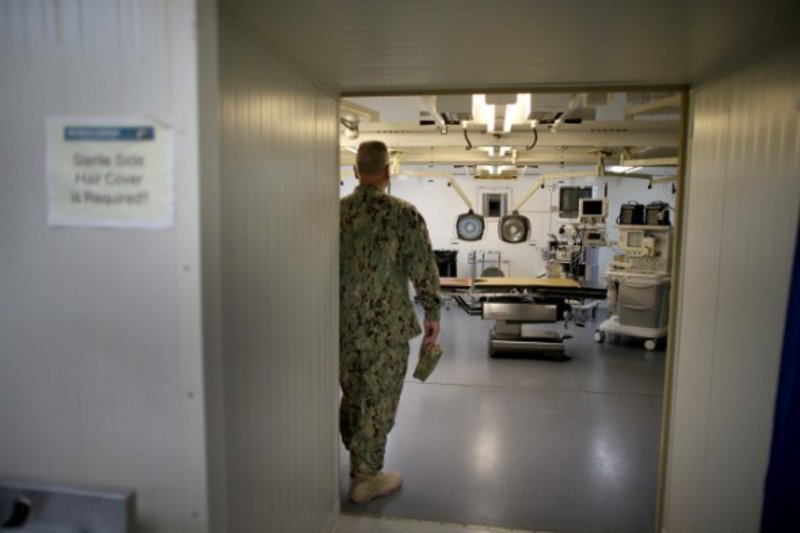 Deprivation and Despair: The Crisis of Medical Care at Guantánamo

Posted from justsecurity.org
Posted in these groups:

MAJ Montgomery Granger
2 y
Please do, Capt! Medical mission is always a priority in the incarceration of detainees/POW's. The health, safety and wellness of those in our care is a top concern of the medical chain of command, all the way to the Pentagon, and a top concern of commanders. When we plan warfighting, each area, each branch plans off of their worst case scenario and then plans contingencies. They come up with courses of action based on the mission and commander's intent. The commander chooses a course of action and then the department heads plan the details of their mission within the larger objective. The worst case scenario for any medical mission is losing a patient/casualty. Detainee health and wellness is always maintained ABOVE minimum requirements. DAILY medical INTEL is gathered so that the command is aware of the slightest change in detainee health. If we could do that to a level EXCEEDING that for our own US personnel, with over 200 battlefield evacuated detainees, we can certainly do it with 40, and then some. The medical mission at Gitmo is so robust, that they are actually prepared, at a moment's notice, to care for many more detainees than they currently have on hand. And, just like in 2002, they are prepared for any potential need. If they don't have it and they need it, it is provided. That is the REAL story.
(0)
Reply
(0)
Read This Next
RallyPoint Home