"The Distinguished Flying Cross was established by Congress on 2 July 1926 and may be awarded to any Navy, Marine Corps, or Coast Guard personnel, while serving in the capacity of the Armed Forces, who distinguish themselves for heroism or outstanding achievement while participating in aerial flight. Designers: Elizabeth Will and Arthur E. DuBois. Photographed during World War II. National Archives photograph. Catalog#: 80-G-K-13532.

U.S. Army Corps reservist Captain Charles A. Lindbergh was the first to receive the Distinguished Flying Cross on 11 June 1927 for his May 1927 solo flight across the Atlantic in the Spirit of St. Louis. Wilbur and Orville Wright later received the decoration for an earlier event—the first manned powered flight at Kitty Hawk, North Carolina—on 18 December 1928. Orville’s was awarded posthumously, as he died in 1912.

The Distinguished Flying Cross may be awarded to any servicemember, while serving in the capacity of the Armed Forces, who distinguish themselves for heroism or outstanding achievement while participating in aerial flight. For heroism, the act must involve action in the face of danger and well above the actions of others under similar circumstances. For extraordinary achievement, the act must be so exceptional that it clearly sets apart the individual from his or her colleagues.

The Army’s Institute of Heraldry’s Arthur E. DuBois and Elizabeth Will designed the Distinguished Flying Cross medal. It has a four-bladed propeller in the reentrant angles of the cross, with rays between the arms of the cross. The reverse side of the medal is blank, leaving space for the recipient's rank and name. The ribbon is primarily blue, with a narrow band of red, bordered by white stripes. The edges of the ribbon are outlined in white and blue bands. For subsequent medals, stars are authorized for wear for the naval services. In order of precedence, the Distinguished Flying Cross is after the Legion of Merit and before the Navy/Marine Corps Medal."

Posted from history.navy.mil
Posted in these groups: 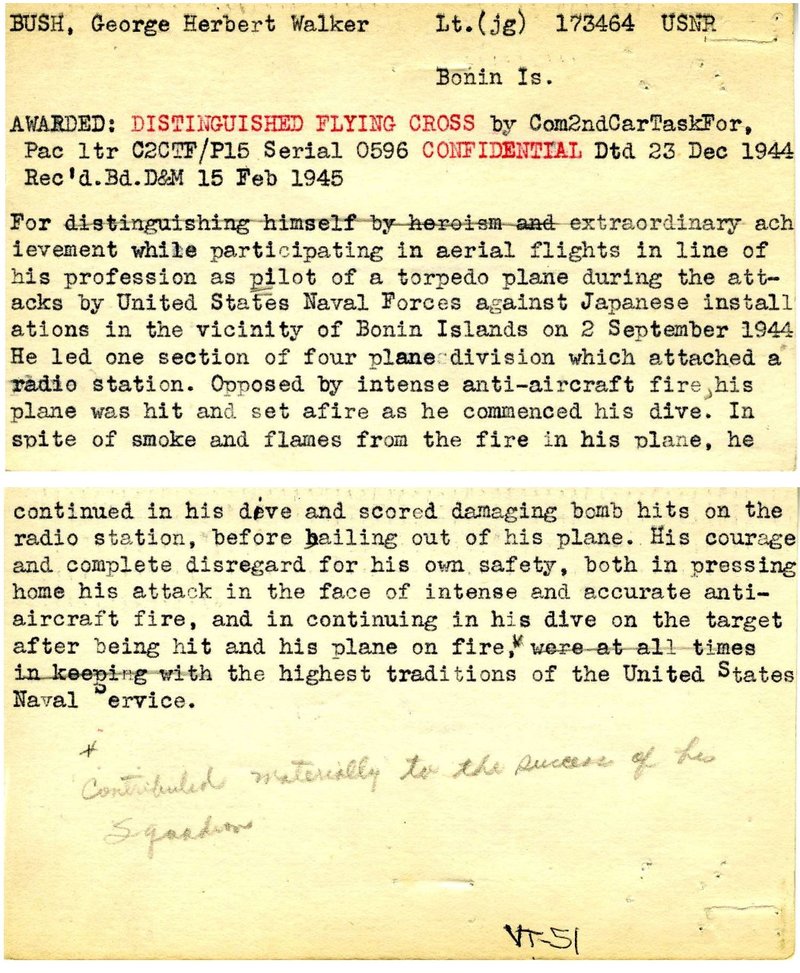 Browse our products on Amazon: https://amzn.to/2YILTSD Love our channel? Help us save and post more orphaned films! Support us on Patreon: https://www.patreo...

Thank you my friend SGT (Join to see) for making us aware that on June 11, 1927, Charles Lindbergh was awarded the first Distinguished Flying Cross by President Calvin Coolidge.
Thank you as well for posting the background from {[history.navy.mil/browse-by-topic/heritage/awards/decorations/distinguished-flying-cross.html]}


Images
1. Award Card, Distinguished Flying Cross - George Herbert Walker Bush, Bonin Islands - December 23, 1944
AWARDED: DISTINGUISHED FLYING CROSS by Com2ndCarTaskFor,
Pac ltr C2CTF/P15 Serial 0596 CONFIDENTIAL Dtd 23 Dec 1944
Rec’d.Bd.D&M 15 Feb 1945
For distinguishing himself by heroism and extraordinary achievement while participating in aerial flights in line of his profession as pilot of a torpedo plane during the attacks by United States Naval Forces against Japanese installations in the vicinity of Bonin Islands on 2 September 1944. He led one section of four plane division which attached a radio station. Opposed by intense anti-aircraft fire his plane was hit and set afire as he commenced his dive. In spite of smoke and flames from the fire in his plane, he
[Distinguished Flying Cross award card, back.]
continued in his dive and scored damaging bomb hits on the radio station, before bailing out of his plane. His courage and complete disregard for his own safety, both in pressing home his attack in the face of intense and accurate anti-aircraft fire, and in continuing in his dive on the target after being hit and his plane on fire,* were at all times in keeping with the highest traditions of the United States Naval Service."

2. Title: Distinguished flying Cross
"Caption: Established by Congress on 2 July 1926 for award to any serviceman who, after 6 April 1917, distinguishes himself by heroism or extraordinary achievement while participating in an aerial flight. Designers: Elizabeth will and arthur E. DuBois. Photographed during World War II."

4. Harmon Tischer Utter was awarded the Distinguished Flying Cross on December 10, 1941
In June 1941 'He then joined Patrol Squadron ONE HUNDRED AND ONE, and was serving with that squadron, based on Manila, Philippine Islands, when the United States entered World War II, 8 December 1941. "For extraordinary flying achievement …on December 10, 1941…” he was awarded the Distinguished Flying Cross, the citation continuing in part: “Despite the fact that the plane was heavily laden with a torpedo and bombs, his skillful landing of his injured plane in a heavy sea without further injury to it or its personnel, made it possible to have the plane in service again on the following day.”

"Harmon Tischer Utter born in Neville, Ohio, on 25 August 1909, son of James O. and Emma S. (Tischer) Utter. He attended New Richmond (Ohio) High School, and the Marion (Alabama) Institute, prior to his appointment to the US Naval Academy, Annapolis, Maryland, from the Sixth District of his native state in 1928. Graduated and commissioned Ensign on 2 June 1932, he subsequently advanced in rank, attaining that of Captain, to date from 1 January 1951.
Following graduation from the Naval Academy in 1932, he joined the USS Salt Lake City and served as Gunnery Observer with Scouting Squadron Nine until detached in January 1935. Ordered to the Naval Air Station, Pensacola, Florida, he had flight training there, receiving the designation, Naval Aviator on 30 April 1936. He remained at the Pensacola Air Station until June of that year, when reported aboard USS Ranger for duty with aviation units attached to that aircraft carrier. In December 1937 he transferred to Cruiser Scouting Squadron FOUR, aviation unit of the USS Northampton.
Returning to the United States, he was an Instructor at the Naval Air Station, Pensacola, from June 1939 to September 1940, after which he had similar duty until June 1941 at the Naval Air Station, Miami, Florida. He then joined Patrol Squadron ONE HUNDRED AND ONE, and was serving with that squadron, based on Manila, Philippine Islands, when the United States entered World War II, 8 December 1941. "For extraordinary flying achievement …on December 10, 1941…” he was awarded the Distinguished Flying Cross, the citation continuing in part: “Despite the fact that the plane was heavily laden with a torpedo and bombs, his skillful landing of his injured plane in a heavy sea without further injury to it or its personnel, made it possible to have the plane in service again on the following day.”
From September 1942 to May 1943 he was Training Officer on the staff of Commander Fleet Air Wing NINE, after which he served as Officer in Charge of the Aviation Detail at the Naval Torpedo Test Range, Montauck Point, Long Island, New York. In June 1944 he became Commander Carrier Air Group EIGHTY THREE, attached to the USS Essex, and for outstanding services in that command was awarded the Navy Cross, and the Legion of Merit, with Combat “V.” The citations follow in part:
Navy Cross: “For extraordinary heroism as Task Group Strike Commander and Air Coordinator of flights of planes launched from carriers of Task Force FIFTY EIGHT, in action against major units of the Japanese Fleet in the East China Sea on April 7, 1945. Braving intense antiaircraft fire from the enemy fleet, Commander Utter coordinated the strike despite adverse weather conditions and, skillfully leading his planes, pressed home an attack which resulted in the sinking of a Japanese forces in the Pacific War Area from March 18 to August 12, 1945…AS Task Force Coordinator of the airborne strike against an enemy battleship in Yokosuka Naval Base on July 18, he skillfully directed the attack which resulted in the serious damaging of this vessel. By his tireless efforts, initiative and unremitting devotion to duty, he contributed materially to the success of his air group in the Pacific…”
He was awarded the Air Medal with Gold Stars in lieu of the Second and Third Air Medals and a Gold Star in lieu of the Second Distinguished Flying Cross, for meritorious achievement in completing his fifth, tenth, fifteenth, and twentieth strike missions in the vicinity of Nansei Shoto and Kyushu respectively, covering the period March 18 to May 18, 1945. He is also entitled to the Ribbon for, and a facsimile of the Presidential Unit Citation awarded the USS Essex.
Detached from command of Air Group EIGHTY THREE in September 1945, he reported the next month as Air Officer of the USS Leyte. He remained aboard that aircraft carrier until May 1947, and in June became Assistant Director of Training on the staff of the Chief of Naval Air Training, Cabaniss Field, Corpus Christi, Texas, after which he attended the course at the Armed Forces Staff College, Norfolk, Virginia.
In February 1950 he joined the staff of Commander Air Force, US Atlantic Fleet, and in March 1952 transferred to the staff of Commander Naval Striking and Support Forces, Southern Europe. He continued to serve in that assignment until September 1953, when he became Commanding Officer of the Naval Air Station, Anacostia, DC. He commanded the USS Monterey from January to September 1955, when he reported as Chief of Staff and Aide to Commander Task Group 7.3. In April 1957 he assumed command of the USS Wasp and in April of the next year was ordered to duty at the Field Command, Armed Forces Special Weapons Project, Albuquerque, New Mexico.
In addition to the Navy Cross, Legion of Merit with Combat “V”, Distinguished Flying Cross with Gold Star, Air Medal with two Gold Stars, and the Presidential Unit Citation Ribbon, Captain Utter had the American Defense Service Medal; World War II Victory Medal; Navy Occupation Service Medal; National Defense Service Medal; and the Philippine Defense Ribbon.
His official home address was in Neville, Ohio. He was married to the former Georgianna Parks of Philadelphia, Pennsylvania. Captain Utter passed away 14 August 1958 in Erick, Oklahoma.

Besides notoriety, what do astronaut Alan Shepard, actor Clark Gable, aviatrix Amelia Earhart, and president George H. W. Bush all have in common? Each disti...

The Distinguished Flying Cross
Besides notoriety, what do astronaut Alan Shepard, actor Clark Gable, aviatrix Amelia Earhart, and president George H. W. Bush all have in common?
Each distinguished him- or herself by heroism or extraordinary achievement while participating in aerial flight.
Each acted in the face of danger, well above those actions performed by others engaged in similar flight operations, with results so exceptional as to render them conspicuous among those accomplished by others involved in similar circumstances.
Each of these four brave Americans, and thousands more like them, was awarded the military’s fourth highest decoration: the Distinguished Flying Cross.
On this episode, learn all about the prestigious medal and the organization designed to promote its heritage with guest Chuck Sweeney, retired US Navy Commander and President and CEO of the Distinguished Flying Cross Society. Learn how the medal was once awarded to civilians (like Amelia Earhart and and Orville and Wilbur Wright) but is now reserved solely for military recipients. Then find out how Chuck was awarded three DFCs following a week of particularly harrowing combat operations while piloting an A-4 Skyhawk during the Vietnam conflict."
https://www.youtube.com/watch?v=LWRgq73uynA

The Stories of the Distinguished Flying Cross - trailer w/Gary Sinise 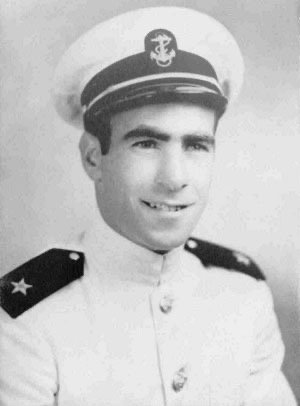 My Uncle, Ensign Eugene A Greene, was awarded the Distinguished Flying Cross for
his heroism at the Battle of Midway In WWI LTC Stephen F.
(6)
Reply
(0)