The U.S. military’s growing alliance with the Philippines may be at risk after the Pacific nation’s president on Monday issued a stunning call for American troops to end their longstanding mission in the country’s southern region.

It was the first time that the newly elected Philippine President Rodrigo Duterte, a brash populist who took office in June, has made public remarks opposing the presence of American troops.

Duterte said in a speech in Manila that the 100-plus American special operations troops in the southern Mindanao region should leave, and he pointed to past abuses by U.S. forces during the period when the Philippines was an American colony before 1946.

“Duterte is putting in jeopardy the alliance," said Patrick Cronin, director of the Asia-Pacific Security Program at the Center for a New American Security in Washington.
Cronin said the U.S. should take a wait-and-see approach to determine whether it was just an off-the-cuff remark, which is common for Duterte. “There’s a lot of extemporaneous speaking from the new president. I don’t take those statements at face value,” he said.

But, Cronin added, “He does needs to figure out what kind of relationship he wants to have with the U.S. Speaking whatever comes into his mind, he’s going to ruin this alliance before he knows it.”
The U.S. military alliance with the Philippines expanded significantly under Duterte’s predecessor, In March, the two countries announced plans for a permanent American military presence and five military bases that will support rotational deployments of U.S. forces near the contested South China Sea.

Military leaders view the Philippines as a key ally for containing China and its territorial ambitions in the South China Sea.

Duterte did not offer any deadline for the removal of American troops.

A Pentagon spokesman said there has been no official discussion of changing the current U.S. mission in the southern Philippines. “We have not been contacted by authorities regarding this issue,” said Cmdr. Gary Ross, a spokesman.

“U.S. Special Forces have been providing support and assistance in the southern Philippines for many years, at the request of several different Filipino administrations. Over the last two months, we have been consulting with our Filipino partners at senior levels on ways we could increase our assistance to support the new Administration's counter-terrorism efforts. We will continue to consult closely with our Filipino partners to appropriately tailor our assistance to whatever approach the new Administration adopts,” Ross said in a statement Monday.

U.S. military operations in the southern Philippines began in 2002, targeting the militant group Abu Sayyaff, which has sought to establish a separate Muslim state. In 2014, Abu Sayyaff’s leaders swore allegiance to the Islamic State group that holds territory in Iraq and Syria.

But last year the U.S. officially ended that mission, which involved about 600 troops. Only a small group of American forces remains there, advising the Filipino military and providing intelligence support.
The new Filipino president is originally from the southern Mindanao region, a mostly Muslim patch in a majority Catholic country, and his comments may reflect personal or emotional sentiments about the region that has been racked by heavy crime and Islamic extremist activity.

"For as long as we stay with America, we will never have peace in that land," Duterte said in the speech in Manila, according to The Associated Press.

"I do not want a rift with America, but they have to go."

The rise of Islamic extremism in Asia is a growing concern for the U.S. military. U. S. Pacific Command head Adm. Harry Harris said in July that the Islamic State, also known as ISIS or ISIL, is trying to “rebalance” and expand its presence in the Pacific.
New rotations — Army

The new rotations into the Philippines has affected all four military services.

The Army has supplied Green Berets for the ongoing mission to counter Abu Sayyaff. In addition, American soldiers have trained in the Philippines in recent years as part of the Army’s Pacific Pathways program.

Pacific Pathways, first launched in 2014, employs a single unit through what officials call a “training pathway.” This unit spends three to four months in a series of bilateral and multilateral exercises and engagements with foreign militaries.

This summer, during one of the Army’s "pathways," the 25th Infantry Division headquarters stood up a tactical command post on Fort Magsaysay in the Philippines. The headquarters ran mission command from there while soldiers from 2nd Stryker Brigade Combat Team, 2nd Infantry Division trained with the Thai, Malaysian and Indonesian armies.

Currently, about 80 Marines from III Marine Expeditionary Force are in the Philippines on a rotational training mission.

The Marine Corps works with the Philippine military on the full spectrum of operations, including responding to natural disasters, theater security cooperation and preparing to defend the Philippines, said Lt. Gen. Lawrence Nicholson, III MEF commander.
“I was just there a couple weeks ago inspecting a suite of gear,” Nicholson told Marine Corps Times recently. “We’ve got about 80 vehicles that are there, principally for humanitarian and disaster relief operations. But every time we do a large scale exercise, we try to pull that gear out, make sure it’s fresh; make sure it’s ready to go.”

Nicholson stressed that the team of roughly 80 Marine planners in the Philippines and other Marines who come to the country for exercises are not permanently assigned there. “You’ll see a couple thousand Marines in the Philippines for training, but they’re in there for three, four weeks and then they’re out,” he said.

In April, five Air Force A-10C Thunderbolt II “Warthogs” from the 51st Fighter Wing at Osan Air Base, South Korea, and three HH-60G Pave Hawk helicopters with the 18th Air Wing from Kadena Air Base, Japan, traveled to Clark Airbase in the north-west part of the nation.

The aircraft conducted joint training flights with the Philippine air forces before leaving at the end of the month.

Secretary of the Air Force Deborah Lee James, speaking to reporters at the Pentagon Sept. 7, said there were no immediate plans to send another air contingent to Clark Air Force Base.

The secretary did say, however, that the U.S. and the Philippines were working on improving a second base, Basa, which could receive Air Force aircraft in the future. “This would be one location where we would see, over the next few years, more presence from a rotational standpoint for training,” she said.

The U.S. Navy has increased its port visits this year, typically to Manilia and Subic Bay. And the U.S. Navy has also begun conducting joint patrols with the Filipino Navy in the South China Sea, in part a response to China's increasingly aggressive operations.

U.S. officials, both military and civilian, will likely meet with the Duterte to discuss the future of the military relationship, Cronin said.

"We just need to sit down with him and say 'You want this? Fine. You don’t want this? Fine. If he really wants the U.S. removed from the southern Philippines, then we would oblige him," Cronin said.

Tentative plans call for installing advanced senors in the Philippines to provide intelligence, surveillance and reconnaissance on a scale far beyond the Filipino military's current capabilities. That would help the Filiipinos to both counter Islamic extremists in the south and also track the Chinese off the northwestern coastline.

"This is the kind of information system we can create for the Philippines. I don’t think the president really wants to discard the benefits of working with us over a few offhand comments," Cronin said. 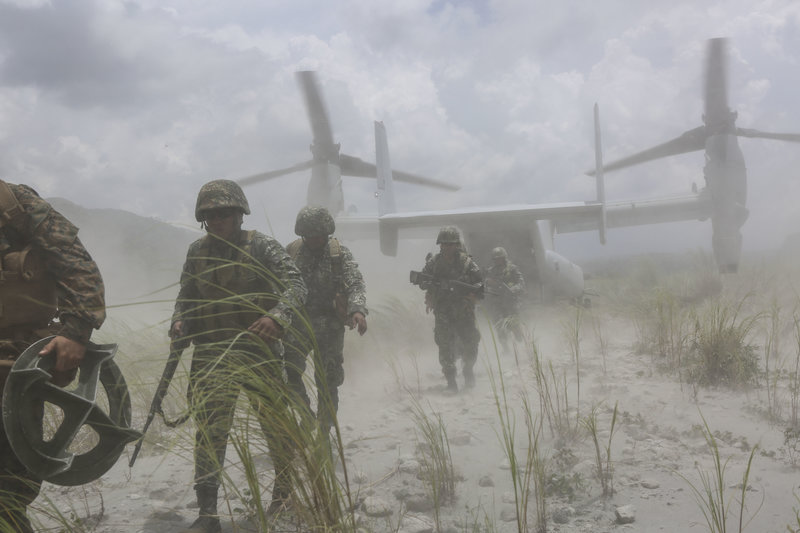 SN Greg Wright
Posted >1 y ago
As someone who has lived in the PI (after I got out), had a Filipino wife, and speaks fluent Tagalog, I say...fuck 'im. Bring the boys and girls home. Let's see how he fares with China breathing down his neck, because sure as shitting, the first thing China does if we leave, is take that next reef, right next to PI.
(3)
Comment
(0)

SFC George Smith
>1 y
point made...
I have several friends with their Families still living in "PI", and they have been worried about this for many years...
(1)
Reply
(0)

MAJ (Join to see)
2 y
We have goodwill with the Filipinos as we liberated them from Japanese tyranny.
(0)
Reply
(0)

MSG Tom Earley
Posted >1 y ago
When China moves against the rest of the South China Sea islands that are disputed between Vietnam, China, and the Philippines we should tell him to go pound sand and deal with China by him self
(2)
Comment
(0)

SGT (Join to see)
Posted >1 y ago
Until they need us!
(2)
Comment
(0)
Show More Comments
Read This Next
RallyPoint Home