SP5 Mark Kuzinski
4.31K
7
2
7
7
0
Ralph W. Galati, who retired as a captain in the U.S. Air Force, was taken prisoner and held at Vietnam's notorious "Hanoi Hilton," where a fellow POW was the future U.S. Sen. John McCain. After 14 months in captivity, Galati returned to his native Philadelphia in 1973, worked as a flight instructor, then joined IBM, where he worked for 28 years.
A few years after that retirement in 2007, Galati got a phone call from the president of St. Joseph's University. Would he become director of his alma mater's new Office of Veterans Services? Galati said yes.
As a retiree from both corporate America and the armed forces, Galati's distinctive background and experience gave him a platform to help other servicemen and servicewomen. The transition from military to civilian life is eerily similar to the transition from full-time work in business to life in retirement, he noted.
The hardest part: "Having to set your own goals, and manage an unstructured schedule, making a plan and then living the plan."
This year, his office is organizing an ambitious veterans' business education program, part of a consortium of colleges that aims to integrate post-9/11 vets into corporate America.
"If you are a veteran with an honorable discharge and want to start your own business, this is the program for you," Galati said in an interview.
An anonymous donor, an alum of St. Joe's and a veteran, provided funding.
"The donor family has been really supportive. They saw a show on 60 Minutes about a similar program at Syracuse University, and that stimulated them to create this at St. Joe's," he explained.
Labor data from 2015 show that veterans experience a higher jobless rate than the nonveteran population. While the overall U.S. unemployment rate was 5.1 percent last year, veterans age 18-24 were unemployed at a 9.2 percent rate; those age 25-45, at a 6.6 percent rate.
"Many who served in Iraq and Afghanistan are locked out of high-quality, middle-class jobs in the economy even though they possess significant leadership experience, an outstanding work ethic, and other valuable skills," Galati said. "The challenge is getting them to enroll in business training. That's what our programs offer."
Galati, 68, lives in Wallingford with his wife of 44 years, Rosemary. He attended St. James High School, and signed up for Air Force ROTC at St. Joe's. He attended USAF Flight Training and received his wings in 1971.
He was an officer in an F-4 Phantom aircraft, assigned to Ubon Royal Thai Air Force Base in Thailand, when on Feb. 16, 1972, he and his copilot were shot down over North Vietnam, captured, and taken to Hanoi.
As a prisoner of war, Galati said, he endured isolation, starvation, and beatings. Among the other POWs was the future Republican senator from Arizona. "Everyone knew who he was," Galati said of McCain, the son of an admiral. One day, the prisoners were allowed into an exercise yard, and the two men spoke briefly.
McCain was released a few weeks before Galati in 1973. He made his way to Philadelphia to tell Galati's wife of her husband's condition.
"He tracked down my family and called my wife. He told her he had seen me and I'd be home. That was a nice gesture for a total stranger. He didn't have to do that, but he went out of his way," Galati said.
He understands the challenges veterans face once they leave the service and enter the working world. He remembers "losing your military support structure, both the discipline and the guys that have your back every day. The move from an extremely disciplined environment to one that is quite the opposite, and having to make your own decisions."
Galati completed his active duty in 1978 and was hired by IBM in 1979. After retirement, he worked as an adjunct and academic adviser at Widener University, Cabrini College, and St. Joe's from 1982 to 2012. These days, he organizes entrepreneurship programs at St. Joe's Erivan K. Haub School of Business.
The first initiative in April is called "Entrepreneurship Bootcamp for Veterans with Disabilities," which offers post-9/11 disabled veterans an intensive educational training program at no cost. Syracuse University's Institute for Veterans and Military Families pioneered the Entrepreneurship Bootcamp. St. Joe's is the 10th school to join the consortium, which includes Cornell, Texas A&M, and UCLA.
Also offered at St. Joe's is a Veterans Entrepreneurial Jumpstart program, in which participants complete online classes to develop a business plan, then spend seven days on campus with guest lecturers, panel discussions, one-on-one mentoring, and a Shark Tank-style presentation. For the following year, the vets enjoy services such as website development, tax and accounting assistance, and mentoring.
"These programs help disabled veterans realize their goals by providing education and mentorship services free of charge that are too often unaffordable for those who have served our country," Galati said. 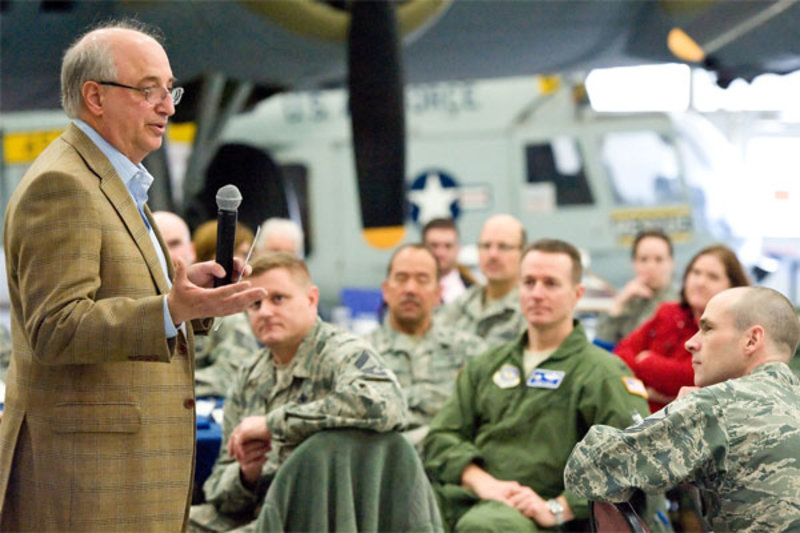