"Franz Ferdinand
Franz Ferdinand Biography
Duke (1863–1914)
Franz Ferdinand's assassination on June 28, 1914, at the hand of a Serbian terrorist group the "Black Hand," led to the beginning of World War I.
Synopsis
Austrian Archduke Franz Ferdinand was born on December 18, 1863, in Graz, Austria. In 1900, Ferdinand gave up his children's rights to the throne in order to marry a lady-in-waiting. While in power, he attempted to restore Austro-Russian relations while maintaining an alliance with Germany. In 1914, a Serb nationalist assassinated him. One month later, Austria declared war on Serbia and World War I began.

Early Life and Marriage
Franz Ferdinand was born in Graz, Austria, on December 18, 1863, the oldest son of Archduke Karl Ludwig, who was the younger brother of Austro-Hungarian Emperor Franz Joseph. Franz Ferdinand was a member of the House of Hapsburg, rulers of the Holy Roman Empire, the Austro-Hungarian Empire and the Spanish Empire. He began his military career at age 12 and was quickly promoted through the ranks becoming a major general at age 31. After the suicide of the emperor's son, Crown Prince Rudolf, in 1889, and his own father's death from typhoid fever in 1896, Franz Ferdinand was groomed to inherit the throne.

In 1894, Franz Ferdinand met Countess Sophia Chotek and the couple quickly fell in love. However, marriage to a Hapsburg required that one be a member of a reigning or formally reigning dynasty of Europe, and the Choteks were neither. The deeply in love Franz Ferdinand refused to marry anyone else, however, so the couple kept their relationship secret. After the family was informed of the relationship, Emperor Franz Joseph refused to give his permission to the marriage. Eventually, several influential European leaders, including Pope Leo XIII, argued on behalf of the love-sick Franz, stating that the disagreement was undermining the stability of the monarchy. Franz Joseph finally agreed on the condition that no descendants of Franz and his new wife succeed to the throne. The couple married on July 1, 1900.

Archduke of Austria-Hungary
Austria-Hungary was a polyglot empire of different ethnic groups at odds with each other over religion and politics, and united to a flag that wasn't theirs. The only thing the divergent ethnic people hated more than each other was Hapsburgs. Archduke Franz Ferdinand's public persona was cold, sharped-tongued and short-tempered. He was also rumored to be insane due to the inbreeding of the Hapsburg family. One matter is clear: Franz Ferdinand understood that the empire was disintegrating and, thusly, that something needed to be done.

At one point, Franz Ferdinand proposed changing the Austro-Hungarian rule with a triple monarchy of Slavs, Germans and Magyars, each having an equal voice in government. However, this idea was unpopular with the ruling elite, further stirring doubts of Franz Ferdinand's sanity. He also considered forming a federal government of 16 states, calling it the United States of Greater Austria. This idea was in direct conflict with the Serbian nationalists who had designs of breaking off with Bosnia and Herzegovina to form an independent state. Though he cared little for their nationalist ambitions, he advocated for a careful approach with the Serbs, warning his military leaders that harsh treatment toward them could cause an open conflict with Russia.

Assassination
In the summer of 1914, Franz Ferdinand and wife Sophie accepted an invitation to visit the capital of Bosnia, Sarajevo. He had been informed of terrorist activity conducted by the nationalist organization the "Black Hand," but ignored the warnings. On the morning of June 28, 1914, the royal couple arrived by train and a six-car motorcade drove them to city hall for an official reception. The archduke and his wife were in the second car with the top rolled back in order to give the crowds a good view.

At 10:10 a.m., as the motorcade passed the central police station, a Black Hand agent, Nedjelko Cabrinovic, hurled a hand grenade at the archduke's car. The driver accelerated when he saw the flying object, and the bomb exploded underneath the wheel of the next car, injuring two of its occupants along with a dozen spectators. Franz Ferdinand is reputed to have shouted in anger to local officials, "So, you welcome your guests with bombs?!" He also reportedly stated, "What is the good of your speeches? I come to Sarajevo on a visit, and I get bombs thrown at me. It is outrageous."

On the route back to the palace, the archduke's driver took a wrong turn into a side street, where 19-year-old nationalist Gavrilo Princip was waiting. As the car backed up, Princip approached and fired his gun, striking Sophie in the abdomen and the archduke in the neck. Both died before reaching the hospital. 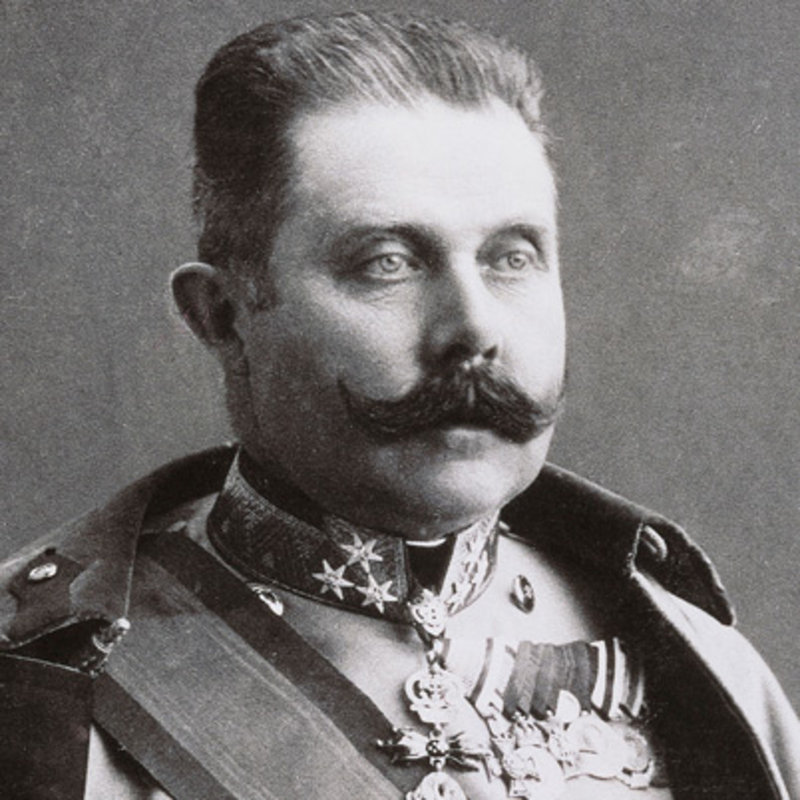 LTC Jeff Shearer
Posted >1 y ago
David the first time I heard of this was when I a young college student. A buddy and I we’re asking trivia questions. Needless to say I got it wrong the first time I was ask haha
(2)
Comment
(0)
Show More Comments
Read This Next
RallyPoint Home