'Funny' Cicadas Star In Photo Parade Thanks To Fairfax Family

SFC (Join to see)
146
0
0
0
0
0
FAIRFAX, VA — When Scott Kanowitz walked into his home recently with his shirt covered in cicadas, he wasn't surprised when his wife told him to immediately get out. What did shock him, however, was what came next.

The back yard that an entire community of cicadas calls home has became an impromptu photo backdrop for a collection of photos starring the insects that, in their own right, have become a national craze. What started with search for a fun family activity hatched into a new hobby centered on toys and other props that Kanowitz's children have collected and has continued to grow the family's bug-centric infatuation.

The attention that has come from the photo session has just been icing on the cicada cake.


"It was just jokes for my kids and for my family — and from there, it just exploded," Kanowitz told Patch on Thursday.


Scott Kanowitz and his children have used toys and other props to serve as a backdrop for cicadas found in their back yard. (Photo courtesy of Scott Kanowitz)
"We're always looking for fun things to do, me and my daughter, and we like to joke around a lot. This was just a natural progression from everything else we do."

Find out what's happening in Fairfax City with free, real-time updates from Patch.
Your email address
Let's go!
After Kanowitz was kicked out of his house by his wife after seeing her husband covered in cicadas, he — along with 11-year-old daughter, Ellie, and son, Jared, 8 — set the insects down on the railing of their deck. The cicadas formed what looked like a barbershop quartet. That prompted a search for a microphone and other props among Barbie dolls and Legos in order to enhance the photo, Kanowitz said.

What started with one Lego police car led to a series of creative ideas that hasn't stopped since.

"It just kind of ballooned from there," Kanowitz said.


Scott Kanowitz and his children have used toys and other props to serve as a backdrop for cicadas found in their back yard. (Photo courtesy of Scott Kanowitz)
Jared brought down a Lego police truck to place the cicadas in before more toys and vehicles were brought outside to include in the photo lineup. The initial discovery led to the search for more toys, which seemingly has no end in sight as "we have a lot of Legos," Ellie told Patch on Thursday.

After the photos were initially published by a local radio station, Kanowitz said he has received a myriad suggestions from friends, neighbors and total strangers as to how the cicadas can be displayed in photos.


Scott and Ellie Kanowitz have become increasingly familiar with cicadas after Scott walked into the house with several on his shirt. (Photo courtesy of Scott Kanowitz)
His kids find the attention from the photos surprising but are loving every minute.

"I think it's funny that they quickly made it as the top story," Ellie said.

As for young Jared, he didn't even notice his dad walking into the house covered in cicadas until his mom started to scream.

"She was super scared and told Dad to get out of the house," Jared said.


Scott Kanowitz and his children have used toys and other props to serve as a backdrop for cicadas found in their back yard. (Photo courtesy of Scott Kanowitz)
Among Kanowitz's favorite photos is one of a single cicada wearing a police hat, while Jared counts a photo of a cicada captured behind bars as being his top pick. Ellie, meanwhile, enjoys the entire collection, which continues to grow as the kids put their creativity to work.

Some photos have turned out better than others, including a Memorial Day barbecue photo. While many of the images have been photographic home runs, others have struck out due to the "ego" of the cicadas, which have sometimes refused to cooperate, Kanowitz said.

Asked what she thinks of her new-found insect friends, Ellie said she appreciates the way that cicadas are "mostly relaxed" except for when it rains and the insects "get kind of crazy" and more difficult to pose in photos. Her brother, meanwhile, finds the bugs "funny," especially in the way they land once dislodged from trees.


Scott Kanowitz and his children have used toys and other props to serve as a backdrop for cicadas found in their back yard. (Photo courtesy of Scott Kanowitz)
There is no shortage of photo ideas — or cicadas — of which "a ton" reside on the family's property and which have left the ground covered in cicada shells, Kanowitz said Thursday. Following a year dominated by talk of the coronavirus pandemic, Kanowitz said the recent cicadas craze has been a breath of fresh air, although he said he can live without any culinary creative use of the insects. 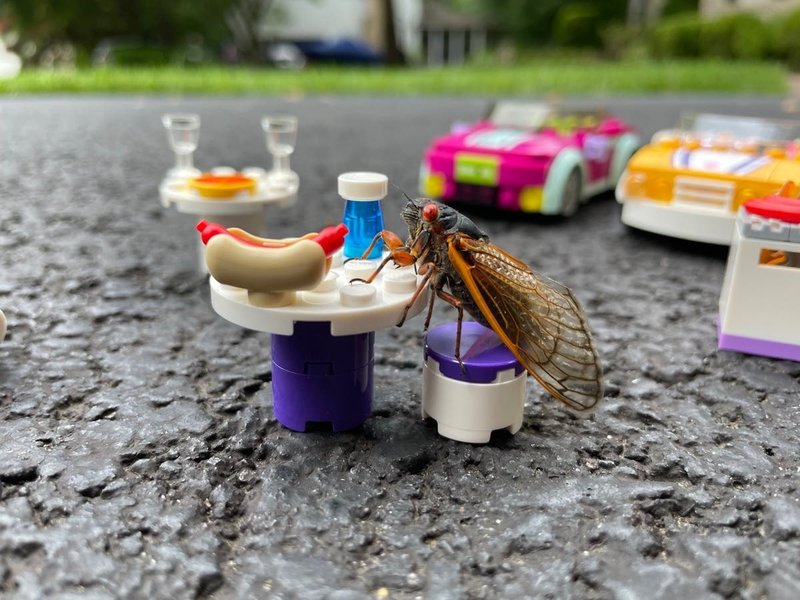 'Funny' Cicadas Star In Photo Parade Thanks To Fairfax Family

Posted from patch.com
Posted in these groups:

Photography
Posted 8 mo ago
Read This Next
RallyPoint Home