Harriers in Japan stand down after crash | Marine Corps Times

The Harrier pilot has been released from the hospital after being rescued by the Air Force’s 33rd Rescue Squadron, which is based at Kadena Air Base, Okinawa, according to a III Marine Expeditionary Force news release on Sept. 23.

An investigation into the crash is underway, Marine Corps officials said.


“It is common practice for units to execute operational pauses following a significant mishap,” noted the news release, which did not say how long the pause will last. “During this period, every AV-8B will be inspected to ensure they meet operational readiness standards.”

Over the summer, the head of Marine Aviation ordered all non-deployed aircraft to stand down for 24 hours following three separate crashes of F/A-18 Hornet fighters between June and August. Two Marine pilots were killed in those accidents.

“Enough things came together for me to go: I want everybody to take a knee and tell me what they see from their foxhole,” Lt. Gen. Jon Davis told Marine Corps Times on Sept. 6. “Everybody did that. We didn’t see anything systemically wrong with that squadron or the F/A-18.”
Thursday’s crash marked the third major mishap involving a Harrier this fiscal year. A Harrier crashed off North Carolina on May 6. The pilot ejected safely and was not injured.


On March 8, an AV-8B caught fire while preparing to take off from amphibious assault ship Kearsarge for an airstrike against the Islamic State. Col. Robert Fulford, then commander of the 26th Marine Expeditionary Unit, later said it was a “true miracle” that no one was hurt by the initial explosion.


“The response of the crash fire rescue crew immediately to be able to contain and handle the situation on the flight deck prevented a further tragedy from occurring,” Fulford told Marine Corps Times on June 30.
The Harrier has the highest mishap rate per flying hour of any Marine fixed-wing aircraft, according to data from the Naval Safety Center for fiscals 2011 to 2015.


A possible reason for the Harrier’s relatively high mishap rate is that it is a much more technologically complicated machine than the Hornet because the AV-8B is a short take-off and vertical landing aircraft, said Todd Harrison of the Center for Strategic and International Studies think tank.


“One of the big improvements they’re making in the F-35B is that much more of it is automated and handled by the flight control system,” Harrison told Marine Corps Times. “In the Harrier, it’s a lot of stick and rudder, feeling the seat of your pants.”
Another issue unique to the Harrier is that it is a single-engine aircraft, so if a Harrier’s engine fails, the plane will crash unless it is near a runway, said retired Navy Cmdr. Christopher Harmer.

“The AV-8B Harriers are getting old; the newest USMC AV-8B Harrier is at least 20 years old, and most of the airframes are approaching 30 years of service,” said Harmer, senior naval analyst at the Institute for the Study of War. “The older the aircraft get, the more likely they are to suffer mechanical malfunctions.”


Harriers are flying longer than they were initially expected to, said Jesse Sloman, of the Center for Strategic and Budgetary Assessments. The fleet was supposed to be retired in 2012.


“Since January 2015, the Marine Corps has undertaken an aggressive improvement program to improve Harrier readiness and those efforts are paying off as the number of available aircraft and flight hours available per pilot continues to climb,” Sloman said. “However, there’s no question that the Corps needs to acquire F-35s as quickly as possible to ensure the AV-8Bs can be retired on schedule.”


solutions that were outlined in the review," Burns said.


Ultimately, the Marine Corps plans to have 11 flyable Harriers per squadron and give Harrier pilots 15.4 flight hours per month, Burns said. 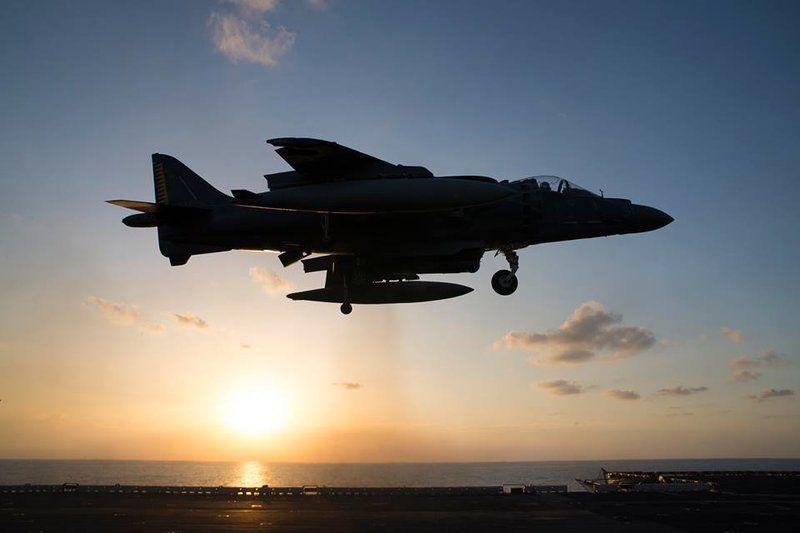 Harriers in Japan stand down after crash | Marine Corps Times

SFC Mark Merino
Edited 4 y ago
Posted 4 y ago
I don't sweat the' even the newer model Harriers are 20 years old' part. Seems ancient, but I had Kiowas that were in Vietnam. Before they were converted to Delta models at the Bell factory, I hasd airframes from 1967 still on the flight line in 2008 Iraq. I repaired previous field expedient combat repairs from Vietnam where they used old painted over Budweiser cans to patch 12.7 and 14.5mm entry wounds on UH-1's as late as 1996 that never mad it into the historical records. The mission must be met.
(4)
Comment
(0)

SFC Mark Merino
Posted 4 y ago
My God that is appauling flight time. I'm NOT bashing the Corps at all. They have a legacy of stretching their budget in ways that our civilian branches should emulate. But those hours are so low that they can't even maintain their current proficiency, let alone be progressing. When operational readiness ratings get that low, the only options that commanders have (at their discretionary level) is to cannibalize already non-mission capable (NMC...or broke as $&!? Aircraft). Back in the pre-Regan era of aviation, sometimes units would cannibalize aircraft until it looked like an out of town Escalade parked on South Central. They tried preventing this by putting a limit on the total number of parts that could be stripped and installed on other aircraft, but when the mission is at risk of failing, you KNOW that parts will get.....'borrowed' or 'acquired'. More than once, one of these aircraft with 'borrowed' or 'acquired' parts from it finally gets put back together and let's just pray that everything is reinstalled correctly. I'm not implying anything, just giving your minds a tour of the wonderful world of military aviation, and the hard decisions that they are forced to make.
(4)
Comment
(0)

LTC Stephen F.
Posted 4 y ago
It makes perfect sense for the USMC to ground all AV-8B Harrier jump jets as an investigation is underway to determine what factors led to the crash of a Harrier about 100 nautical miles east of Okinawa SFC Joe S. Davis Jr., MSM, DSL.
We are not engaged in active combat in the area of Japan right now so an operational pause seems prudent. We are at the end of Federal Fiscal Year anyway and OPTEMPO authorizations and funding will be restarted on October 1.
(2)
Comment
(0)
Show More Comments
Read This Next
RallyPoint Home