Here's the first honorary Sergeant Major of the Army

Retired Gen. Gordon Sullivan was honored this week by Sergeant Major of the Army Dan Dailey and five of his predecessors at Fort Bliss, Texas. The ceremony took place Tuesday during the first International Training and Leader Development Symposium, which brought together American noncommissioned officers and senior enlisted leaders from about 55 countries.

Sullivan served as the Army’s top general from 1991 to 1995. Since 1998, he has been the president of the Association of the United States Army, advocating for soldiers and the Army.

“I’m kind of speechless, to tell you the truth,” Sullivan said about the award, according to the NCO Journal. “A sergeant major of the United States Army? Are you kidding me? I wasn’t always a four-star, and some of the best [mentors] I ever had were noncommissioned officers in the United States Army in some really bad places.”
Sullivan’s selection, which had been announced during the AUSA annual meeting in October but hadn’t been formally recognized until this week, was a no-brainer and a unanimous decision, Dailey said.

Sullivan is “a great mentor, a great leader and a great soldier,” Dailey said, according to NCO Journal.

In addition, Sullivan “has spent nearly four decades in service to the Army and has always gone above and beyond to advance the NCO corps,” Dailey said in an e-mailed statement to Army Times.

The honorary SMA title was born when Dailey wanted to honor an individual who had demonstrated lifelong support and commitment to the NCO corps, the Army, soldiers and their families, according to information from Dailey’s office.

The honorary title will be bestowed once a year and only with the approval of three acting or former SMAs.
“Not only is it important to recognize those who support and advance the [NCO] corps, I hope to bring awareness to the power of a professional NCO corps in the success of an Army and, in essence, of a nation,” Dailey said.

As Army chief of staff, Sullivan’s contributions to the NCO education system include overseeing the establishment of the Battle Staff NCO Course in 1991 and taking the Sergeants Major Course from six months to nine months, according to NCO Journal.

The ceremony honoring Sullivan was just one of many events that took place during the International Training and Leader Development Symposium, which was born out of a conversation between Dailey and his senior enlisted counterparts from New Zealand, Australia and Canada.

The goal is to bring together an international coalition of senior enlisted partners at least once a year and build upon those relationships.

“This was the largest gathering of senior enlisted NCOs in the world,” Dailey said in his statement to Army Times. “Officers collaborate regularly, but we had never done it.”

“The experience and knowledge being shared was unmatched,” Dailey said. “The true benefit of the symposium was the collaboration and sharing of knowledge between nations from around the world. It was just amazing to see the most senior enlisted soldiers from every corner of the globe working out problems like how to develop or strengthen the training and education of their enlisted force and how to legitimize and demonstrate the worth of the NCO corps.”

“It’s an incredible honor to have 55 countries joining us here today,” Allyn said during his speech, according to NCO Journal. “As I have served around the globe, and particularly in combat environments over this last 20 years, it has been our teammates, our partners and our allies that have stuck with us through some pretty tough times. Their nations have signed on and committed with us.”

“With this event we are building a world-class team of coalition partners ready to work together to tackle whatever this complex and dangerous world has in store for us,” Dailey said. “We don’t fight by ourselves anymore. In fact, we haven’t since the Civil War. We have to rely on our partners to deter, shape and win together.” 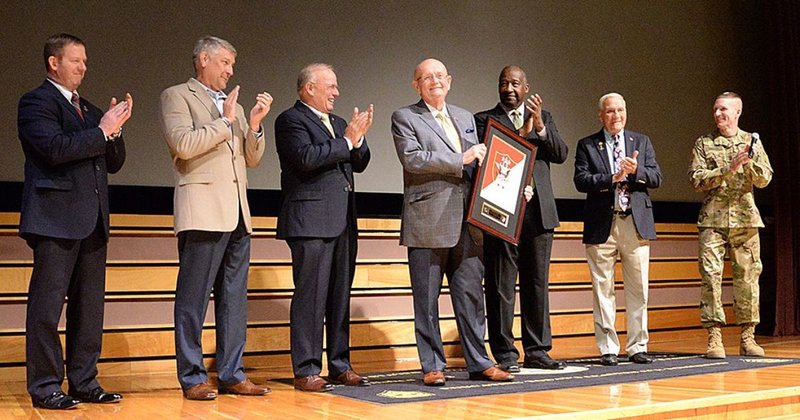 Here's the first honorary Sergeant Major of the Army

PO1 William "Chip" Nagel
Posted 4 y ago
That is Awesome. Recognize the General for still fighting for Enlisted Soldiers.
(7)
Comment
(0)

SFC Joe S. Davis Jr., MSM, DSL
4 y
PO1 William "Chip" Nagel roger that, he is inspiration I am a member of the AUSA and he is the president.
http://www.ausa.org/about/Pages/default.aspx

Since 1950, the Association of the United States Army has worked to support allaspects of national security while advancing the interests of America's Army andthe men and women who serve.

LTC Stephen F.
Posted 4 y ago
That is interesting SFC Joe S. Davis Jr., MSM, DSL. I find it strange that with all of the potential senior NCOs who have served this nation with honor and courage, Retired U.S. Army GEN Gordon Sullivan was honored this week as the first honorary Sergeant Major of the Army. I realize that after he left active duty he has served service members and veterans as President of AUSA.
Kudos to GEN Gordon Sullivan and to AUSA.
(5)
Comment
(0)

SFC Joe S. Davis Jr., MSM, DSL
4 y
LTC Stephen F. it definitely strange, how unique is that, WOW what a game changer this, its weird/awkward. Nonetheless as you have said," Kudos to GEN Gordon Sullivan and to AUSA.
(3)
Reply
(0)

SGM Eric Lobsinger
Edited 4 y ago
Posted 4 y ago
A great honor for a great man. However, I wonder if we might have been better served in honoring one of the great CSMs or SGMs from our past who did not serve as the SMA, such as some of the great FORSCOM or TRADOC CSMs (just to name a quick example) who have truly led the way. GEN Sullivan was, and is, a great officer and leader. I, personally, would have preferred to see an NCO so honored. Perhaps the GEN could have been #2 or #3, even if his impact puts him potentially as #1. At the end of the day, he deserves the recognition. There is always the concern that, in recognizing our commissioned brothers and sisters for their accomplishments in serving the nation, and our enlisted force in general, there is also the potential that we are lessening the value we place on our NCO brothers and sisters?
(4)
Comment
(0)

SFC Joe S. Davis Jr., MSM, DSL
4 y
SGM Eric Lobsinger well said and profoundly stated, I am surprised to with all the past Sergeant Majors that have severed.
(2)
Reply
(0)

SGM (Join to see)
4 y
Agree, we honor an officer over a NCO, yet what officer honors an NCO in such a mnner
(1)
Reply
(0)
Show More Comments
Read This Next
RallyPoint Home