Convoys of Iraqi, Kurdish and U.S. forces moved east of Mosul along the front line as U.S.-led coalition airstrikes sent plumes of smokes into the air and heavy artillery rounds could be heard.

Iraqi Prime Minister Haider al-Abadi announced the start of the operations on state television, launching the country on its toughest battle since American troops left nearly five years ago.

Mosul, Iraq's second largest city, has been under IS rule for more than two years and is still home to more than a million civilians according to U.N. estimates.

"These forces that are liberating you today, they have one goal in Mosul which is to get rid of Daesh and to secure your dignity. They are there for your sake," al-Abadi said, addressing the city's residents and using the Arabic language acronym for the Islamic State group.

"God willing, we shall win," he added, flanked by military commanders.

The push to retake Mosul will be the largest military operation in Iraq since American troops left in 2011 and, if successful, the biggest blow yet to the Islamic State. Al-Abadi pledged the fight for the city would lead to the liberation of all Iraqi territory from the militants this year.

In Washington, Defense Secretary Ash Carter called the launch of the Mosul operation "a decisive moment in the campaign" to deliver a lasting defeat to IS.

Iraqi forces have been massing around the city in recent days, including elite special forces that are expected to lead the charge into the city, as well as Kurdish forces, Sunni tribal fighters, federal police and Shiite militia forces.

South of Mosul, Iraqi military units are based at the sprawling Qayara air base, but to the city's east, men are camped out in abandoned homes as the tens of thousands of troops massed around the city have overwhelmed the few military bases in the area.

Kurdish forces are stationed to the north and east of Mosul, a mostly Sunni city that has long been a center of insurgent activity and anti-central government sentiment after the U.S.-led invasion of Iraq in 2003. Iraqi officials have warned that the Mosul operation has been rushed before a political agreement has been set for how the city will be governed after IS.

Lt. Col. Amozhgar Taher with Iraq's Kurdish forces, also known as the peshmerga, said his men would only move to retake a cluster of mostly Christian and Shabak villages east of Mosul and would not enter the city itself due to their concern for "sectarian sensitivities."

"To eliminate the threat we must eliminate (IS) from Mosul," Taher said at a makeshift base in an abandoned house along the front line, some 30 kilometers (19 miles) east of Mosul.

Iraqi special forces Lt. Col. Ali Hussein said the Kurdish forces are leading the first push on Mosul's eastern front. His men were also anxious to move out to the front line, though he said he expects they will wait near the town of Khazer for another day or two.

Mosul fell to IS fighters during the militants' June 2014 blitz that left nearly a third of Iraq in the extremists' hands and plunged the country into its most severe crisis since the U.S.-led invasion. After seizing Mosul, IS leader Abu Bakr al-Baghdadi visited the city to declare an Islamic caliphate that at one point covered nearly a third of Iraq and Syria.

But since late last year, the militants have suffered battlefield losses in Iraq and their power in the country has largely shrunk to Mosul and small towns in the country's north and west. Mosul is about 360 kilometers (225 miles) northwest of the capital, Baghdad.

The operation to retake Mosul is expected to be the most complex yet for Iraq's military, which has been rebuilding from its humiliating 2014 defeat.

Earlier, Iraqi Brig. Gen Haider Fadhil told The Associated Press in an interview that more than 25,000 troops, including paramilitary forces made up of Sunni tribal fighters and Shiite militias, will take part in the offensive that will be launched from five directions around the city.

Fadhil voiced concern about potential action from Turkish troops based in the region of Bashiqa, northeast of Mosul. Turkey sent troops to the area late last year to train anti-IS fighters there. But Baghdad has seen the Turkish presence as a "blatant violation" of Iraqi sovereignty and has demanded the Turkish troops withdraw, a call Ankara has ignored.

Military operations are also predicted to displace 200,000 to a million people, according to the United Nations. Just a few kilometers from the eastern front line, rows of empty camps for displaced civilians line the road, but aid groups say they only have enough space for some 100,000 people.

In Geneva, a senior U.N. official said he's "extremely concerned" for the safety of civilians in Mosul. Stephen O'Brien, the under-secretary-general for humanitarian affairs and emergency relief coordinator, said that as many as "1 million people may be forced to flee their homes in a worst-case scenario."

He warned that families are at "extreme risk" of being caught in crossfire, and that tens of thousands may end up besieged or held as human shields and thousands could be forcibly expelled.

Aleksandar Milutinovic, the Iraq country director for the International Rescue Committee, said the population of Mosul is not all supporters of IS, "they're just people who had no other opportunity or a place to go" and urged Iraqi forces to "show will and a very serious commitment to protecting civilians and ensuring their wellbeing."

In the midst of a deep financial crisis, the Iraqi government says it lacks the funds to adequately prepare for the humanitarian fallout of the Mosul fight. In some cases commanders say they are encouraging civilians to stay in their homes rather than flee.

"While we may be celebrating a military victory (after the Mosul operation is complete)," said Falah Mustafa, the foreign minister for Iraq's Kurdish region, "we don't want to have also created a humanitarian catastrophe." 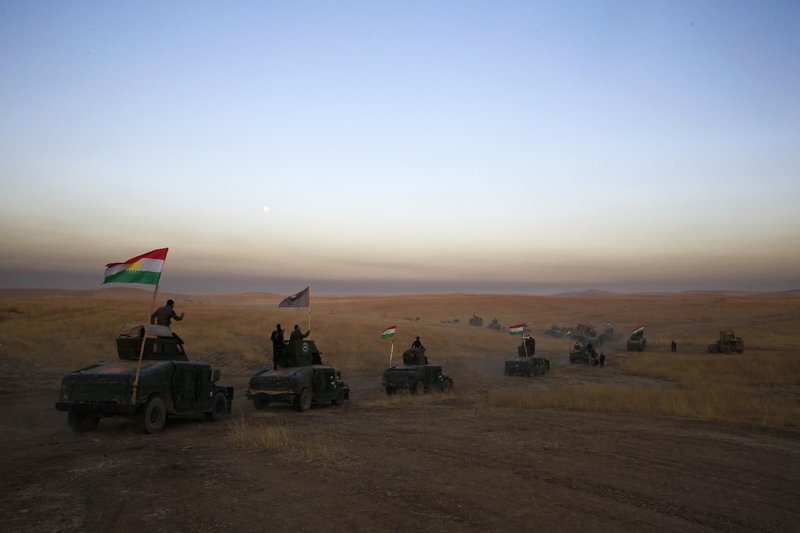 LTC Stephen F.
Edited >1 y ago
Posted >1 y ago
Thanks for providing additional news about the assault on Mosul, Iraq by Iraqi government and Kurdish peshmerga forces which is supported by a U.S.-led coalition air and ground support SP5 Mark Kuzinski?
Hopefully this assault will result in the violent death of as many ISIS thugs and their supporters as possible and they will not be able to flee and blend in with the population.
It would be wonderful if after the carnage inflicted on ISIS that the city of Mosul will be rebuilt and many expatriates will take their places once again in the neighborhoods of Mosul.
LTC Stephen C. Capt Seid Waddell CW5 (Join to see) CW5 Charlie Poulton SGM David W. Carr LOM, DMSM MP SGT SFC Joe S. Davis Jr., MSM, DSL SFC William Farrell SSgt Robert Marx SFC James J. Palmer IV aka "JP4" SSgt (Join to see) TSgt Joe C. SGT (Join to see) SGT John " Mac " McConnell SGT Forrest Stewart SPC (Join to see) SrA Christopher Wright
(5)
Comment
(0)

SGT (Join to see)
>1 y
The news said there are 4,000 enemy dug in and well armed. Let's see how they defend themselves with tons of ordnance falling on them LTC Stephen F. .
(1)
Reply
(0)

CPT Pedro Meza
Posted >1 y ago
Mark, thank you great post. To be physical able to take part in this mission is an honor, for me living in pain, I wish I could be there. I support our brothers and sisters in service.
(2)
Comment
(0)

SFC George Smith
Posted >1 y ago
lets Just post who what where and How... for the bad Guys to know and prep for the upcoming operations...
(2)
Comment
(0)

CPT Pedro Meza
>1 y
Let us post false who, what and how for the bad guys to know.
(1)
Reply
(0)
Show More Comments
Read This Next
RallyPoint Home