Justice Dept. Official to Step Down Amid Uproar Over Leaks Inquiry

PO1 William "Chip" Nagel
127
11
1
2
2
0
John C. Demers, the head of the Justice Department’s national security division, will step down at the end of next week, according to an email he sent to his staff on Monday. His departure was arranged months ago but comes amid backlash over investigations into leaks of classified information.

Mr. Demers was the longest-serving Senate-confirmed official from the Trump administration to remain at the Justice Department during the Biden presidency.

“You can probably imagine that I’ve stayed much longer than planned, but long ago I told the new folks that when school was out, I was out,” Mr. Demers, who has school-age children, wrote in the email, a copy of which was obtained by The New York Times. “And that’s the end of next week.”

Mark J. Lesko, the acting top federal prosecutor for the Eastern District of New York, will replace Mr. Demers on an interim basis until the division’s new leader is confirmed by the Senate, according to an official familiar with the matter. President Biden has nominated Matthew G. Olsen, an Uber executive who has served in several national security roles in government, to serve as the head of the national security division. His Senate confirmation hearing could take place as soon as next month.

John P. Carlin, the second in command in the deputy attorney general’s office, asked Mr. Demers in April to remain at the department, according to the official. Lisa O. Monaco had just been confirmed as the deputy attorney general, and because it would be months before a new leader for the national security division could be confirmed, Mr. Demers would provide continuity.

Mr. Demers asked to leave by summer, and the two men eventually agreed that he would stay on through June 25, the official said.

But his departure comes as Democrats and First Amendment advocates have attacked the Justice Department after revelations that prosecutors supervised by Mr. Demers seized the records of reporters from The New York Times, The Washington Post and CNN.

Just before Mr. Demers was confirmed in 2018, those prosecutors also obtained the records of top House Democrats while investigating leaks of classified information. The department’s inspector general announced an investigation on Friday into the matters.

While it is common for the Justice Department to try to find out who shared classified information with the news media, it is highly unusual to secretly gather records of journalists and lawmakers. The prosecutors also prevented the lawyers and executives of The Times and CNN from disclosing that records had been taken, even to their newsroom leaders, another highly aggressive step.

Though such moves require signoff by the attorney general, Mr. Demers and his top counterintelligence deputies would typically be briefed and updated on those efforts.

Much of the spotlight on national security cases during Mr. Demers’s tenure focused instead on the special counsel, Robert S. Mueller III, who ran the Russia investigation, the Justice Department’s highest-profile and politically complicated national security matter.

But Mr. Demers’s term included oversight of other significant cases, some with political overtones. National security prosecutors in 2018 arrested an executive at Huawei, one of China’s most important telecommunications companies, on charges of defying sanctions, as President Donald J. Trump sat next to President Xi Jinping of China at a state dinner.

Mr. Demers’s signature achievement is likely to be the division’s work to combat Chinese intellectual property theft, espionage and other national security threats as part of its so-called China initiative, which focused law enforcement resources on such cases.

SIGN UP FOR ON POLITICS WITH LISA LERER: A spotlight on the people reshaping our politics. A conversation with voters across the country. And a guiding hand through the endless news cycle, telling you what you really need to know.
Sign Up
Under the program, the department prosecuted about half a dozen cases in which economic information was targeted, highlighting how China had become a safe harbor for criminal hackers who sometimes worked for its government. Hackers accused of working for the People’s Liberation Army were charged with breaking into the computers of American companies like Equifax to steal information.

The Justice Department also cracked down on China’s efforts to cultivate and influence academics at U.S. colleges and research centers in an effort to have them transfer technical expertise and other research. The department also strengthened the review of Chinese companies that sought to invest in U.S. technology.

In an interview last fall, Mr. Demers said China was “as assertive as it’s ever been in terms of pressing its interests openly around the world.” The China initiative was a continuation of cases that the Obama administration had done under Mr. Carlin and Ms. Monaco, he said.

“We know that these cases are very difficult to do,” Mr. Demers said, noting that China may never extradite the defendants to be tried in an American court. “But John Carlin, when he was here, said we were willing to bring these because the foreign policy implications were important. We needed to say to China: ‘This is not acceptable.’”

Bringing together the types of cases that relate to the national security threats posed by China in one initiative helped to codify that work, and Mr. Demers and other Justice Department leaders were able to show that it was a top priority, he said.

His ability to skirt controversy ended in recent weeks, as the revelations about reporters’ record seizures and gag orders came to light.

Leak investigators in 2018 also obtained data from Microsoft and Apple that belonged to Democrats on the House Intelligence Committee, including Representatives Adam B. Schiff and Eric Swalwell, both Democrats of California. Mr. Schiff is now the panel’s chairman.

In those instances, the Justice Department also told the technology companies not to inform customers about the subpoenas until recently.

Some Democrats demanded answers about what Mr. Demers knew about the leak cases. Senator Chuck Schumer of New York, the majority leader, called on him on Sunday to testify before Congress.

When Mr. Demers became the head of the national security division on Feb. 22, 2018, he was praised by both Democrats and Republicans, who noted that he had worked under administrations of both parties.

The confirmation was his third stint at the Justice Department; from 2006, when the national security division was created, to 2009, Mr. Demers was part of its leadership team. He had previously worked in the department’s Office of Legal Counsel, essentially the government’s lead legal adviser, and in the office of the deputy attorney general.

He graduated from Harvard Law School, where he and Mr. Carlin were friends and classmates. 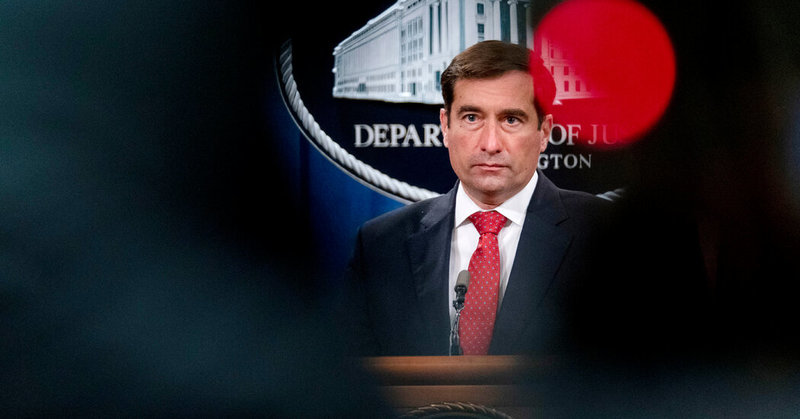 Justice Dept. Official to Step Down Amid Uproar Over Leaks Inquiry