Marine Sgt. Tim Wynn was home from Iraq less than three days when he wound up in handcuffs, arrested for aggravated assault at a bar in his native Philadelphia.

After being among the first troops to participate in Operation Iraqi Freedom, his hometown streets seemed unfamiliar. The veteran struggled to reconnect, couldn't hold a job and depended on drugs and alcohol to get through his endless days.

He spent a year in a county jail for infractions related to his substance abuse.

But after his seventh arrest in 2013, he landed in the courtroom of Judge Patrick Dugan, an Army reservist who leads the city's Veterans Treatment Court
— a place where former troops who run afoul of the law can get medical treatment for addiction as well as support from the Department of Veterans Affairs, veterans service organizations and veteran mentors.


And that's where Wynn’s life turned around.

The Philadelphia courtroom is one of 463 nationwide that offer mandatory rehabilitation and medical treatment for veterans arrested for certain felonies or misdemeanors.

On Tuesday, the Justice Department pledged to support more outlets in this growing court system, awarding more than $4 million to 13 state and local jurisdictions to develop their own programs.


Principal Deputy Associate Attorney General Bill Baer said that with one in six Iraq or Afghanistan veterans abusing alcohol or drugs — a situation that can contribute to arrest — the nation owes it to military veterans to help them "get back on their feet, stay sober and productively integrate."
“Our military veterans often risk life and limb for their country … We owe our very best to help those who struggle with substance abuse," said Baer during a forum hosted by the department to mark Prescription Opioid and Heroin Epidemic Awareness Week.


According to data provided by Justice For Vets, an advocacy group that provides funding and training for court staff, two-thirds of veterans who go through the system successfully complete their regimens, and 88 percent of courts see a reduction in arrests.

The system has proven so successful that the VA has mandated that every VA medical center have a veterans justice outreach specialist who provides legal assistance to veterans and supports veterans treatment courts in their region.

"And all too often, that substance abuse begins with opioids prescribed by DoD or VA doctors for service-related conditions,” McDonald said. "All of these things are preventable."

To combat opioid addiction among veterans (veterans are 10 times more likely to abuse opioids than civilians, according to McDonald), VA has launched an aggressive campaign to educate physicians on prescribing practices and support non-pharmaceutical pain management programs.
Since 2012, VA has reduced the number of patients prescribed opioids by 25 percent, the number of patients on long-term opioid therapy by 30 percent, and the number taking high-dose opioids by 36 percent.

“We owe it to our nation’s veterans to help them end their dependence on opioids and break down that spiral that ends all too often in homelessness, prison or suicide,” McDonald said.


While veterans court advocates had sought $15 million for programs nationwide in 2016, they said Tuesday that any amount helps safeguard against veterans winding up in the prison system.

According to Judge Robert Russell, who started the first veterans treatment court in Buffalo, N.Y., recidivism rates are low.

"We’ve had 200 some-odd veterans who completed our program and probably only four or five who experienced recidivism. It’s been a blessing to work with veterans," Russell said.

Wynn says he owes his life to the second chance he received in a veterans court and has pledged his life to help others get back on their feet. The married college student and father of two now serves as the mentor coordinator for the Philadelphia Veterans Treatment Court.

“There’s definitely a new mission in my life. My mission was to suppress different feelings and emotions for a long time. Now my mission is to recover and help other veterans recover," Wynn said. 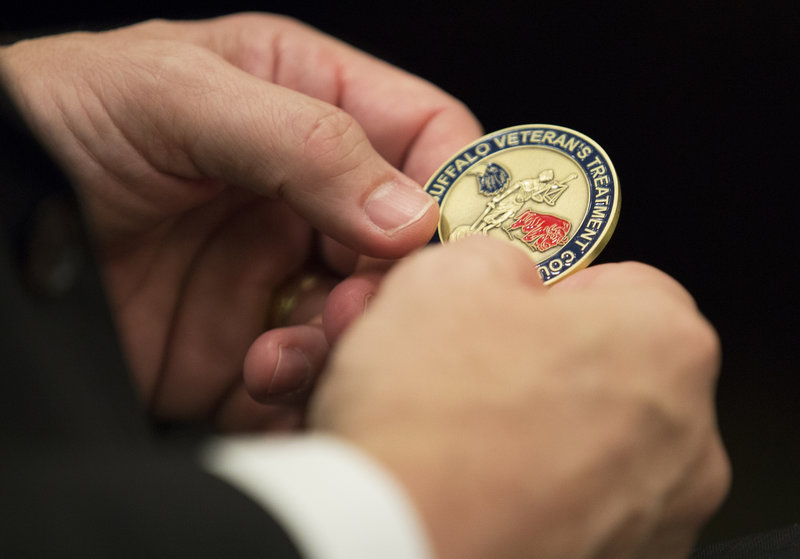 LTC Stephen F.
Posted 5 y ago
SFC (Join to see) this article meandered around a lot through voting preferences before I finally found "According to Judge Robert Russell, who started the first veterans treatment court in Buffalo, N.Y., recidivism rates are low. "We’ve had 200 some-odd veterans who completed our program and probably only four or five who experienced recidivism. It’s been a blessing to work with veterans," Russell said.
The Justice Department’s grants this year will go to court systems in Kansas, Louisiana, Minnesota, Florida, Montana, Virginia, Missouri, California, Texas, Wisconsin and Pennsylvania."
$4 million sees like a very small amount for a Federal Government agency program.
This seems like good news to me that recidivism rates among veterans are low in some areas. I hope that will be a nation-wide trend.
(0)
Comment
(0)
Read This Next
RallyPoint Home