SFC (Join to see)
10.1K
61
22
21
21
0
Beginning Oct. 1, all soldiers and noncommissioned officers preparing to attend an NCO professional military education course will be required to take an English comprehension and writing assessment.

The move is part of the Army’s ongoing effort to sharpen its education courses and develop better leaders.

A pilot underway right now with Basic Leader Course students, most of whom are specialists seeking promotion to sergeant, showed that about 75 percent of those assessed need additional help or coaching. More than 12,000 BLC students have taken the assessment.

“What we’ve found was that they have writing skills, but they could improve to a level that would be comparable to a first-year college student,” said Liston Bailey, chief of learning initiatives and innovations for Training and Doctrine Command’s Institute of NCO Professional Development. “A lot of the young men and women come in, and their writing skills are not polished. They don’t necessarily have the skills to write about and defend their ideas, or how to support an argument, let’s say.”

The goal isn’t to make soldiers more like college students. Instead, it’s to gradually improve their writing abilities, Bailey said.

“Communication is a most vital aspect of leadership, and as an NCO matures, they need to be able to speak and write with authority, to counsel subordinates in writing, and to analyze and describe how to fix problems,” Bailey said.

The Army’s new NCO Evaluation Report also contains a narrative portion, requiring senior NCOs to have solid writing abilities so they can properly evaluate their subordinates, he said.

“That’s why we need good writing competencies and skills across the NCO cohort,” Bailey said.
For now, only soldiers attending the Basic Leader Course, formerly known as the Warrior Leader Course, are being required to take the writing assessment. Bailey anticipates more than 18,000 students will have taken the assessment by Sept. 30, the end of the fiscal year.

Beginning Oct. 1, all NCO academies, including the Sergeants Major Academy, will start offering the assessment. TRADOC last week sent a tasking to NCO academies across the Army, calling on them to start preparing to administer the assessment. About 97,000 soldiers attend NCO professional military education courses each year, Bailey said.

“It will be mandatory that the schools participate in this initiative,” Bailey said. “If a school hosts NCO professional military education, then it’s something they must do.”
The Army has learned enough from its ongoing Basic Leader Course pilot to decide to expand the assessment to all levels of NCO education, he said.

“We think now’s the time to expand it to all levels of NCO education,” Bailey said, adding that at 69 cents per assessment, the program is not expensive.

Taking the assessment will help NCOs become more aware of their writing abilities, he said.

“It promotes self-awareness and understanding of their level of communication skills as far as English composition, writing and the expression of ideas.”

On the first day of class, students were asked to write an essay. In that case, soldiers were given about 45 minutes to write an essay about peer pressure.
The pilot was then expanded to the current test, which targets all Basic Leader Course students.

Of the roughly 75 percent of soldiers who were found to need additional help or coaching, most of the shortfalls had to do with grammar, spelling and punctuation, Bailey said. Many also struggled with organization.

“That’s what we really want to get after,” he said. “Can you organize your thoughts?” 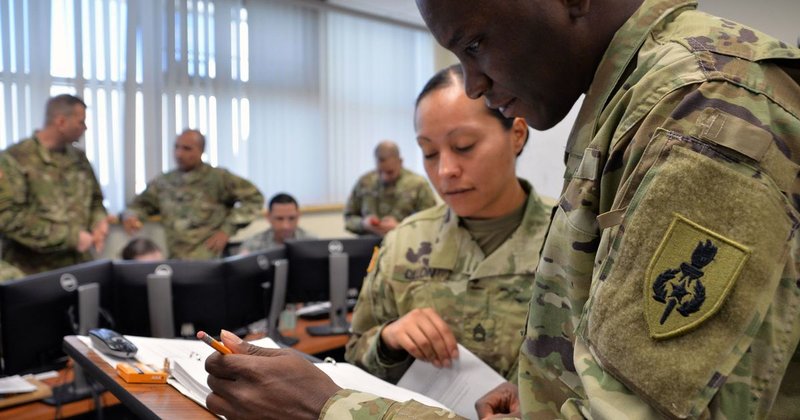 SSgt Robert Marx
>1 y
Yes the five paragraph report has wide application. Many people are deficient in writing skills and so cannot get promoted.
(1)
Reply
(0)

SGM Erik Marquez
Posted 5 y ago
This is a long time coming long time needed program.
Very happy to hear they went with an "assessment" at this point not a "test"

The next question is, what are they doing to support the educational needs identified?

Id'ing a need with no comprehensive and workable plan to address the observed defenency is a waste of time and resources.
(6)
Comment
(0)

LTC Stephen C.
>1 y
SGM Erik Marquez, what you say makes total sense and why have an assessment if there's no training to follow? I'll be the optimist and say that there's a training plan and program to go along with the assessment!
(1)
Reply
(0)

SPC Kevin Ford
12 mo
SGM Erik Marquez They might be trying to figure out the boundaries of the issue and then follow it with remediation once they better understand where they are at. There is also the problem of instituting such a program without encountering organizational resistance, sometimes a smaller step gets people comfortable with something before taking a larger step.

Then again I might giving the military too much credit, but that's one possibility.
(0)
Reply
(0)

LTC Stephen C.
Edited >1 y ago
Posted >1 y ago
SFC (Join to see), I wrote a few research papers in high school and did many in college as part of my major in business. We were required to take a few quarters of English composition as well in college. All of this prepared me well for writing in the civilian work world where writing letters and memos is simply part of your work. I had to write research papers for the C&GS Officer Course and again, my training and education stood me in good stead.
I would hope that all noncommissioned officers embrace the opportunity to improve their writing skills for their remaining time in the military and their transition to the civilian work force upon retirement. LTC Stephen F. SGM Erik Marquez
(4)
Comment
(0)

LTC Stephen C.
>1 y
SFC (Join to see), I forgot to mention that the Army had just introduced a recommended Army writing style, which basically dumbed down the English language in terms of sentence composition and word usage. I refused to use this Army writing style, yet still received superior marks on all my Army writing requirements. I'm forever grateful for the C&GS Adjunct Professors for not falling into the pit that the Army had created. I don't know if it's still used, but I certainly hope not. LTC Stephen F.
(1)
Reply
(0)
Show More Comments
Read This Next
RallyPoint Home