CSM (retired) Bennie Adkins was awarded the Medal of Honor for bravery above and beyond the call of duty during the Vietnam War. Fifty-two years ago today from March 9-12, 1966 Adkins distinguished himself during a 38-hour close-combat battle against North Vietnamese Army forces during the Battle of A Shau. During this pitched battle with the North Vietnamese Army (NVA), Adkins was a then sergeant first class serving as an Intelligence Sergeant with Detachment A-102, 5th Special Forces Group, 1st Special Forces.

Adkins was initially awarded the Distinguished Service Cross for his bravery during the battle in 1967, however, in 2002, several awards of the DSC were being reviewed to see if the recipients had been given awards beneath the level of what the men had performed. Adkins’ story was one of them. He was finally awarded the Medal of Honor by President Obama in the White House in August 2014. Adkins was credited with killing 175 of the enemy and taking on a tiger outside the camp during the battle and subsequent evacuation.

Adkins graduated the Special Forces Qualification Course in 1961 and served for more than 13 years in several SF groups including the 3rd, 7th, 6th, and 5th SFGs. He served three combat tours in Vietnam, in 1963, 1965-66, and 1971. He was a graduate of the Sergeant Majors Academy and was the Sergeant Major at the Jungle Warfare School before retiring in 1978.

A Shau Combat: Adkins team was assigned to A-Camp 102 in A Shau and was being targeted by the NVA’s 325B Division and specifically by two regiments, the 18B and the 95B regiments augmented with reconnaissance and engineer elements. They were also supported with three battalions of artillery.

Camp A Shau had 210 CIDG “strikers” who were local men who were trained by the SF team. They were augmented with 143 Nungs and seven additional SF men from the A-503, the Nha Trang Mike Force. The total force consisted of 435 friendly troops of which only 17 were American SF troops, going against two NVA regiments. The camp’s only artillery consisted of one 4.2 inch mortar, four 81mm mortars, nine 60mm mortars and one 57mm recoilless rifle.

The NVA were building in the A Shau Valley and a feared attack was imminent. At 0350 hours on March 9, a thick ground fog enveloped the low hanging clouds in the vicinity. It was then that the NVA unleashed a mortar barrage, that pounded the camp’s defenses until 0630. During the shelling, the NVA moved up two companies who probed the south wall of the camp and was intent on blowing gaps in the concertina wire with Bangalore torpedoes.

During the shelling, two American SF troops were killed and five others wounded as well as several Vietnamese. The antennas for the camp’s radio were knocked out.

By 0900, the camp was receiving emergency resupply drops as well as wounded men were evacuated. At 1100 hours the first tactical airstrikes were conducted around the camp by USAF pilots.

Manning a mortar position, Adkins was wounded numerous times, being blown out of the mortar pit more than once. He then learned of more soldiers wounded in the center of the camp. He left the mortar position to another soldier and dodged mortar rounds and sniper fire, getting the wounded men to a securer location.

Later, under enemy fire, some of it coming from the South Vietnamese LLDB SF allies who had defected to the North during the battle, Adkins took the wounded troops to an airstrip outside the camp for evacuation and drew the enemy’s fire away from the Medevac aircraft. He left the camp again to retrieve supplies from an airdrop that fell into a minefield. And that was just the first day of the battle.

“The bottom line is that it was just not my day to go,” Adkins said later in an interview.

According to the Army’s report on the battle, on the 10th, he continued his bravery:

“Within two hours, Sergeant First Class Adkins was the only defender firing a mortar weapon. When all mortar rounds were expended, Adkins began placing effective rifle fire upon the enemy as they infiltrated the camp perimeter and assaulted his position. Despite receiving additional wounds from enemy rounds exploding on his position, Adkins fought off relentless waves of attacking North Vietnamese soldiers,” the Army report says.

After falling back to a smaller bunker in Camp A Shau, Adkins killed more enemy troops with small arms fire, destroyed equipment and classified documents to prevent them from getting into North Vietnamese hands, and led a group of soldiers in digging their way out of the rear of the bunker and escaping the besieged camp.

They escaped and evaded into the jungle with the NVA hot on their heels. But they were also stalked by an even scarier predator, a tiger. The tiger smelled the blood of the wounded Americans and CIDG troops and began stalking them in the dark, foreboding jungle.

“The North Vietnamese soldiers had us surrounded on a little hilltop and everything started getting quiet,” Adkins said. “We could look around and all at once, all we could see were eyes going around us. A tiger had stalked us that night. We were all bloody and in this jungle, the tiger smelled us and the North Vietnamese soldiers were more afraid of the tiger than they were of us. So, they backed off some and we were able to escape.”

The men evaded capture until March 12 when they were finally rescued. By then Adkins had suffered 18 different wounds.

Adkins remembered his CIDG troops who fought by his side and didn’t quit when the going got tough.

“There were about 410 indigenous Civilian Irregular Defense Group soldiers there with us, and of those, only about 122 survived, and most of those were wounded. It was a horrible, horrible battle. There was valor on all sides, not only from the Americans but from the CIDG soldiers also,” he said.

“I’m just a keeper of the medal for those other 16 (U.S. troops) who were in the battle, especially the five who didn’t make it,” Adkins said.

For conspicuous gallantry and intrepidity at the risk of his life above and beyond the call of duty:

Sergeant First Class Bennie G. Adkins distinguished himself by acts of gallantry and intrepidity at the risk of his life above and beyond the call of duty while serving as an Intelligence Sergeant with Detachment A-102, 5th Special Forces Group, 1st Special Forces, during combat operations against an armed enemy at Camp A Shau, Republic of Vietnam from March 9 to 12, 1966.

When the camp was attacked by a large North Vietnamese and Viet Cong force in the early morning hours, Sergeant First Class Adkins rushed through intense enemy fire and manned a mortar position continually adjusting fire for the camp, despite incurring wounds as the mortar pit received several direct hits from enemy mortars.

Upon learning that several soldiers were wounded near the center of camp, he temporarily turned the mortar over to another soldier, ran through exploding mortar rounds and dragged several comrades to safety. As the hostile fire subsided, Sergeant First Class Adkins exposed himself to sporadic sniper fire while carrying his wounded comrades to the camp dispensary.

When Sergeant First Class Adkins and his group of defenders came under heavy small arms fire from members of the Civilian Irregular Defense Group that had defected to fight with the North Vietnamese, he maneuvered outside the camp to evacuate a seriously wounded American and draw fire all the while successfully covering the rescue. When a resupply airdrop landed outside of the camp perimeter, Sergeant First Class Adkins, again, moved outside of the camp walls to retrieve the much-needed supplies.

Sergeant First Class Adkins eliminated numerous insurgents with small arms fire after withdrawing to a communications bunker with several soldiers. Running extremely low on ammunition, he returned to the mortar pit, gathered vital ammunition and ran through intense fire back to the bunker. After being ordered to evacuate the camp, Sergeant First Class Adkins and a small group of soldiers destroyed all signal equipment and classified documents dug their way out of the rear of the bunker and fought their way out of the camp. While carrying a wounded soldier to the extraction point he learned that the last helicopter had already departed.

Sergeant First Class Adkins led the group while evading the enemy until they were rescued by helicopter on March 12, 1966. During the thirty-eight-hour battle and forty-eight hours of escape and evasion, fighting with mortars, machine guns, recoilless rifles, small arms, and hand grenades, it was estimated that Sergeant First Class Adkins killed between one hundred thirty-five and one hundred seventy-five of the enemy while sustaining eighteen different wounds to his body.

Sergeant First Class Adkins’ extraordinary heroism and selflessness above and beyond the call of duty are in keeping with the highest traditions of the military service and reflect great credit upon himself, Detachment A-102, 5th Special Forces Group, 1st Special Forces and the United States Army." 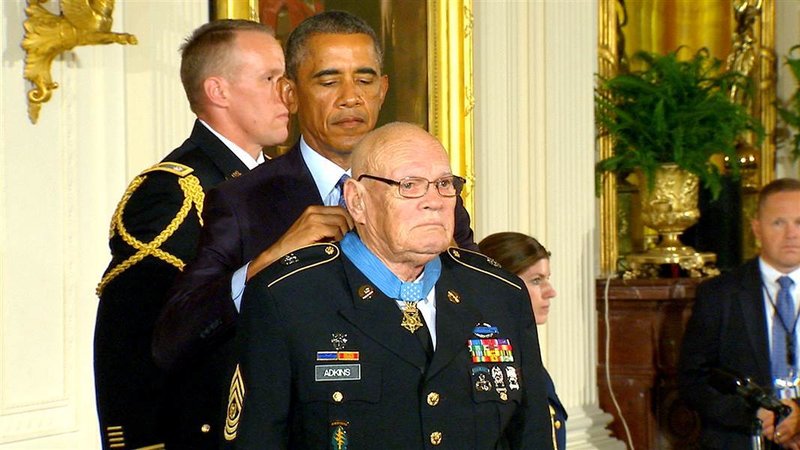 Posted from sofrep.com
Posted in these groups:

SGT David A. 'Cowboy' Groth
Posted 11 mo ago
Thank you for the great share on this war hero,.
(2)
Comment
(0)
Show More Comments
Read This Next
RallyPoint Home