Ng becomes the first woman to be GM of a major U.S. men’s sports team, breaking a barrier that has long seemed impassable

Ms. Ng, who also becomes the first Asian-American general manager in Major League Baseball history, has traveled a long runway to her new role. She held high-ranking positions for three different front offices, played an integral role in building championship rosters for the New York Yankees and spent recent years as a senior vice president in the commissioner’s office.

Ms. Ng has been linked to numerous general-manager openings in the past, but like other women who have risen to senior posts, hasn’t secured the top job. Becky Hammon has broken barriers as an assistant coach for the NBA’s San Antonio Spurs. MLB and the NFL have introduced women to the coaching ranks as well.

“This challenge is one I don’t take lightly,” said Ms. Ng, 51. “When I got into this business, it seemed unlikely a woman would lead a major-league team, but I am dogged in the pursuit of my goals.”

Ms. Ng takes over a Marlins franchise that faces significant challenges attracting talent and fan support. The Marlins consistently have one of the smallest payrolls in a sport with no salary cap to limit spending by deep-pocketed rivals. The team annually ranks near the bottom of the league in attendance at their ballpark in Miami’s Little Havana. The Marlins last won the World Series in 2003. The pandemic also pressured baseball’s economics in the just-completed 2020 season, as teams went without ticket revenue as they played in empty stadiums.

As general manager, Ms. Ng will be responsible for the Marlins’ baseball operations, putting her in charge of constructing the team’s roster, executing trades, signing free agents and building the organization’s farm system. Modern front offices typically have dozens of employees across disciplines like scouting and analytics. Ms. Ng will oversee all of them.

Muffet McGraw, the former championship women’s basketball coach at the University of Notre Dame who now works in the school’s college of business, said the move signals to women and girls that they can aspire to the highest leadership positions in men’s sports. They have eluded them in part because women have been underrepresented in the business and finance roles that often feed into sports’ top executive ranks.

Ms. Ng’s hiring, Ms. McGraw said, is “a huge step. I mean, first we get a vice president (of the U.S.), and now we’re chipping away in every single industry.”

Ms. Ng broke into baseball as an intern for the Chicago White Sox in 1990—three years before the Marlins played their first game as an expansion team in 1993—and rose to assistant director of baseball operations. She went on to become the assistant general manager for the Yankees at age 29, contributing to teams that won three straight World Series titles from 1998 through 2000.

“Kim was a tireless and dedicated executive back then, and in the ensuing years, she has ceaselessly added to her skill set to maximize her talent,” Yankees GM Brian Cashman said.

In 2002, she moved on to the Los Angeles Dodgers. There, she assisted in all player transactions, trades and free agent signings, was responsible for the team’s arbitration efforts and oversaw the pro scouting, medical and video departments.

She has been seen as a candidate for a general-manager spot ever since—only to be passed over many times by men, many of whom lacked her experience and credentials.

When Ms. Ng eventually left the Dodgers to become MLB’s senior vice president of baseball operations in 2011, she made it clear that her ultimate goal was to become a general manager.

“Kim’s appointment makes history in all of professional sports and sets a significant example for the millions of women and girls who love baseball and softball,” MLB commissioner Rob Manfred said. “The hard work, leadership, and record of achievement throughout her long career in the national pastime led to this outcome”

As Ms. Ng’s career progressed, the role of general manager evolved dramatically, a shift accelerated by the data revolution brought about by the publication of the book “Moneyball” in 2003. Front offices got larger and were often populated by younger executives who never played the game. But the invasion of non-baseball types also helped open the door to women executives.

“I was with (former MLB commissioner) Bud Selig probably 15 years ago when he told me that she would be the first general manager,” said Richard Lapchick, founder and director of the Institute for Diversity and Ethics in Sport at the University of Central Florida. “It took a while, but it’s great that it happened.”

The institute issues annual report cards for racial and gender representation in sports, and in 2020 Major League Baseball received a B+ for gender hiring in the MLB central office, where women comprised 40% of the total professional staff. At the team level at the start of the 2020 season, there were no female general managers or presidents of baseball operations, according to the report card.

Ms. Ng will take over a Marlins squad that this past season reached the playoffs for the first time since 2003. She called the job “the honor of my career” after “decades of determination.” Marlins CEO Derek Jeter was the Yankees’ shortstop during Ms. Ng’s tenure in New York. Gary Denbo, Miami’s vice president for player development and scouting, also worked alongside Ms. Ng with the Yankees.

“Her leadership of our baseball operations team will play a major role on our path toward sustained success,” Mr. Jeter said of Ms. Ng.

A group led by businessman Bruce Sherman bought the Marlins for $1.2 billion in 2017 and installed Mr. Jeter as CEO.

After the Marlins were eliminated from the playoffs last month, they parted ways with longtime baseball operations chief Michael Hill, one of the only Black executives at the top of a front office. The Marlins also employ chief operating officer Caroline O’Connor, another of baseball’s highest-ranking women.

With Ms. Ng in place, it increases the likelihood that others follow in her footsteps, as more women assume positions in baseball that for more than a century have been held exclusively by men. Jean Afterman has been an assistant GM for the Yankees since Ms. Ng left New York after the 2001 campaign. The Boston Red Sox promoted Raquel Ferreira to the post of executive vice president and assistant general manager in late 2019. In January, the Giants named Alyssa Nakken an assistant coach, making her the first full-time female coach in MLB history.

“Baseball has a history of Jackie Robinson doing it as a player, and everybody forever since has talked about Jackie Robinson and his importance,” said Mr. Lapchick. “I think we’re going to be talking about Kim in many years ahead as this being an important day for baseball, for sports and I think for America.” 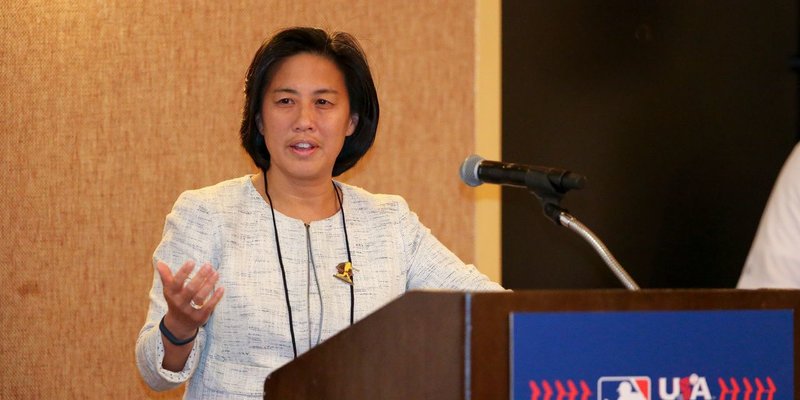 SP5 Dennis Loberger
Posted 6 mo ago
When you look at her resume, you wonder why it took so long
(5)
Comment
(0)

PO1 Brian Austin
Posted 6 mo ago
About time after being AGM for the Yankees and Dodgers. Congrats to her!
(2)
Comment
(0)
Show More Comments
Read This Next
RallyPoint Home