"Mary Queen of Scots lived from 8 December 1542 to 8 February 1587 and was Queen of Scotland from 14 December 1542 until 24 June 1567. Mary is the most intriguing, most studied, and most famous of all Scottish monarchs: probably because she showed herself to be the most human. Though styled "Queen of Scots" she was briefly also Queen of France, and could all so easily also have become what she was seen by many: the rightful Queen of England. The wider picture in Scotland at the time is set out in our Historical Timeline.

Mary was born in Linlithgow Palace on 8 December 1542. Her father James V died six days later and the infant Mary was crowned Queen of Scots at Stirling Castle on 9 September 1543. For a wider view of the background, see our Historical Timeline.

The following five years were marked by efforts by both Henry VIII of England and Henri II of France to annex the Scottish Crown by arranging the marriage of Mary to their respective sons. From 1544, Henry VIII embarked on the "Rough Wooing", the invasion of Scotland. This culminated in 1547 with the Battle of Pinkie, near Musselburgh, in which the English soundly defeated the Scots. Mary was sent to Inchmahome Priory for safety. The English invaded again in 1548 and Mary was moved to Dumbarton Castle.

Henri II of France offered a safe haven for Mary, and troops to help repel the English, in return for an agreement that Mary would marry his son Francois. Mary sailed for France on 7 August 1548, aged 5.

Mary and Francois grew up together in the French Court. They married on 24 April 1558 in Notre Dame Cathedral. Mary was 15, her husband 14. As part of the marriage contract Mary signed over the French crown to her husband if she died without successors. Henri II died in July 1559 and was succeeded by Francois II. Mary became Queen of France.

In England, Edward VI, the son who Henry VIII had wanted Mary to marry, died in July 1553. He was succeeded by Mary Tudor (daughter of Henry VIII and Catherine of Aragon), who in turn died in November 1558. Mary Tudor was followed on the throne by Elizabeth I. In the eyes of Roman Catholics Elizabeth was illegitimate because Henry VIII's marriage to her mother, Anne Boleyn, followed his illegal divorce from Catherine. Mary Queen of Scots was the grand-daughter of Margaret Tudor (and great grand-daughter of Henry VII) and to many both in England and especially across Catholic Europe, her claim to the English throne was stronger than Elizabeth's.

In December 1560 Francois II died leaving Mary as an 18 year old widow stripped of the French crown. She had little choice but to return to a Scotland very different from the one she left in 1548. She arrived back at Leith on 19 August 1561 as a Catholic monarch in a country in which the Reformation was in full swing. Her approach to the religious strife was a pragmatic one that often offended both Protestant and Catholic alike.

In September 1561 Mary set out on the first of the nine "progressions" across Scotland she was to make over the following few years, tours of up to several months at a time. The irony is that for someone who spent such a short period of her life in Scotland, Mary probably saw more of it than most of the nation's monarchs. It was these progressions that are largely responsible for the regularity of the phrase "Mary Queen of Scots stayed here" in guidebooks to historic houses and castles across Scotland.

Meanwhile, Mary faced the biggest decision of her life: who to take as a new husband? Choices on offer could have allied Scotland to a number of the royal houses of Europe. Even Francois's younger brother, the new King of France, was an outside possibility, as was a candidate favoured by Elizabeth I of England in return for possible succession by Mary to the English throne on Elizabeth's death.

But Mary followed her heart rather than her head and so began the tragic chain of events that followed. In February 1565 Mary met Henry Stewart, Lord Darnley, a handsome young cousin. In April that year she nursed him through a bout of measles, and the two fell in love. The match was opposed on all sides, largely on grounds of doubt about Darnley's suitability. Mary's half brother, James Stewart, 1st Earl of Moray, was particularly opposed. Nonetheless, Mary married Darnley on 22 July 1565 in the chapel of Holyrood Palace.

James Stewart, 1st Earl of Moray rose in rebellion, but in August 1565 Mary raised an army and quelled the uprising in what became known as the Chaseabout Raid. It didn't take long for doubts about Darnley's character to come to fruition. Mary rapidly abandoned her original plans to have him crowned King alongside her: and he soon ceased to be an effective Consort, preferring to spend his time carousing with friends in the seamier parts of Scotland's cities.

Mary's marital problems spilled over into wider dissent. Protestant nobles played on Darnley's jealousy to involve him in a plot to murder Mary's Italian secretary, David Rizzio, who they suspected of being a Papal Agent and who Darnley suspected of spending too much time with Mary. On 9th March 1566 Rizzio was brutally murdered in Mary's presence at Holyrood Palace. She was six months pregnant at the time and saw Rizzio's murder as an attempt on her own life or on that of her unborn child: it was certainly intended to be the first step in a coup against her. Mary gained Darnley's help in escaping Edinburgh, and fled to Dunbar Castle, where James, Earl of Bothwell met her with an army of 4,000 which she then used to hunt down the plotters.

On 19 June 1566 Mary gave birth to the future James VI of Scotland and I of England, in Edinburgh Castle, where she had retreated for her own protection. Darnley did not attend James' baptism in Stirling in December 1566.

In February 1567 Darnley, now suffering from syphilis, was persuaded by Mary to return to Edinburgh from Glasgow, where he was accommodated at Kirk o'Field, a house near the High Street. On 9 March 1567 Mary stayed with him until 10pm, before returning to Holyrood. At 2am the following morning a massive explosion totally destroyed Kirk o'Field. The bodies of Darnley and a servant were found in the orchard behind the house, strangled.

Darnley's influential family accused James, Earl of Bothwell of the murder, on the grounds that with Darnley out of the way, Bothwell could pursue his own well known ambitions to marry Mary. Bothwell was tried for the crime in April 1567, but the trial was rigged and no prosecution witnesses turned up. He was acquitted. In fact both Bothwell and Mary (among others) were involved in the plot to kill Darnley, a plot known as the Craigmillar Bond which had been agreed at Craigmillar Castle on 7 December 1566.

On 24 April Mary visited her son James in Stirling. On her way back to Edinburgh she was intercepted by Bothwell and his followers and persuaded to return with him to Dunbar Castle. The two may or may not already have been lovers and Mary may or may not have been a willing participant in her own abduction and subsequent rape by Bothwell. Either way, the two returned to Edinburgh on 6 May 1567. The following day Bothwell obtained a divorce from his first wife, Jean Gordon, and on 15 May he and Mary were married.

Mary was widely perceived as having married her husband's murderer, and widespread public revulsion followed. The result was an uprising, which Mary avoided by retreating with Bothwell to Dunbar Castle. But on 15 June Mary and Bothwell and their followers were confronted by larger forces led by the Protestant Nobles at Carberry Hill near Musselburgh. Bothwell fled, but Mary was taken prisoner. She was still just 24 years old.

Mary was imprisoned at Lochleven Castle and on 24 June 1567 she was given the choice of abdication or death. She abdicated and her infant son became King James VI of Scotland, with her half-brother, the Regent, James Stewart, 1st Earl of Moray. On 2 May 1568 Mary escaped from Lochleven Castle and raised an army: but was defeated by the Earl of Moray at the Battle of Langside on 13 May 1568.

Against all advice, Mary decided to flee to England to seek assistance from Queen Elizabeth. Quite why Mary thought this would be forthcoming given Elizabeth's legitimate fears about Mary's claim to the English Crown is unclear.

Mary never returned to Scotland, and never saw her son again. Instead, she spent the following 19 years in captivity in various English Castles. Finally, after Mary had been tricked into expressing support for a plot to kill Elizabeth, she was sentenced to death. She was executed at Fotheringhay Castle on 8 February 1587.

There are three central ironies to this story. Mary and Elizabeth never met, and it was a commonly held view at the time that the strife could be ended easily if only one of them had been a man and the two could marry. The second is that on Elizabeth's death in 1603 it was Mary's son James who united the crowns of Scotland and England: so while Mary lost in life, she certainly won in death.

And the third? Elizabeth was buried in Westminster Abbey, while Mary had been buried in Peterborough after her execution. After his succession James VI/I had Mary's body brought to Westminster Abbey and interred not far from Elizabeth's: but in a far grander tomb..." 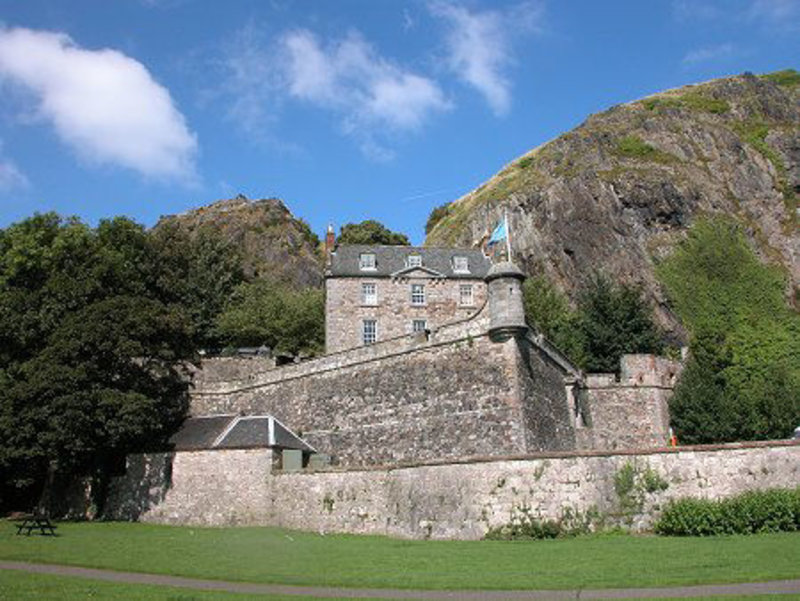