SGT (Join to see)
3.23K
76
9
33
33
0
On May 23, 1900, William Harvey Carney became the first African-American soldier awarded the Medal of Honor for his actions in the Civil War at the Battle of Fort Wagner. From the article:

Of the 3,498 service members who have received the Medal of Honor throughout U.S. history, only 88 have been black.

In recognition of African American History Month, we're sharing the stories of the brave men who so gallantly risked and gave their lives for others, even in times when others weren't willing to do the same in return.

We'll start with the first black recipient of the award: Army Sgt. William H. Carney, who earned the honor for protecting one of the United States' greatest symbols during the Civil War -- the American flag.

Carney was born into slavery in Norfolk, Virginia, in 1840. His family was eventually granted freedom and moved to Massachusetts, where Carney was eager to learn and secretly got involved in academics, despite laws and restrictions that banned blacks from learning to read and write.

Carney had wanted to pursue a career in the church, but when the Civil War broke out, he decided the best way he could serve God was by serving in the military to help free the oppressed.

In March 1863, Carney joined the Union Army and was attached to Company C, 54th Massachusetts Colored Infantry Regiment, the first official black unit recruited for the Union in the north. Forty other black men served with him, including two of famed abolitionist Frederick Douglass' sons.

Within a few months, Carney's training would be put to the ultimate test during the unit's first major combat mission in Charleston, South Carolina.

On July 18, 1863, the soldiers of Carney's regiment led the charge on Fort Wagner. During the battle, the unit's color guard was shot. Carney, who was just a few feet away, saw the dying man stumble, and he scrambled to catch the falling flag.

Despite suffering several serious gunshot wounds himself, Carney kept the symbol of the Union held high as he crawled up the hill to the walls of Fort Wagner, urging his fellow troops to follow him. He planted the flag in the sand at the base of the fort and held it upright until his near-lifeless body was rescued.

Even then, though, he didn't give it up. Many witnesses said Carney refused to give the flag to his rescuers, holding onto it tighter until, with assistance, he made it to the Union's temporary barracks.

Carney lost a lot of blood and nearly lost his life, but not once did he allow the flag to touch the ground. His heroics inspired other soldiers that day and were crucial to the North securing victory at Fort Wagner. Carney was promoted to the rank of sergeant for his actions.

Carney's legacy serves as a shining example of the patriotism that Americans felt at that time, despite the color of their skin.

As for the 54th Massachusetts Colored Infantry Regiment in which Carney served? It was disestablished long ago but reactivated in 2008. It now serves as a National Guard ceremonial unit that renders honorary funerals and state functions. It was even invited to march in President Barack Obama's inaugural parade." 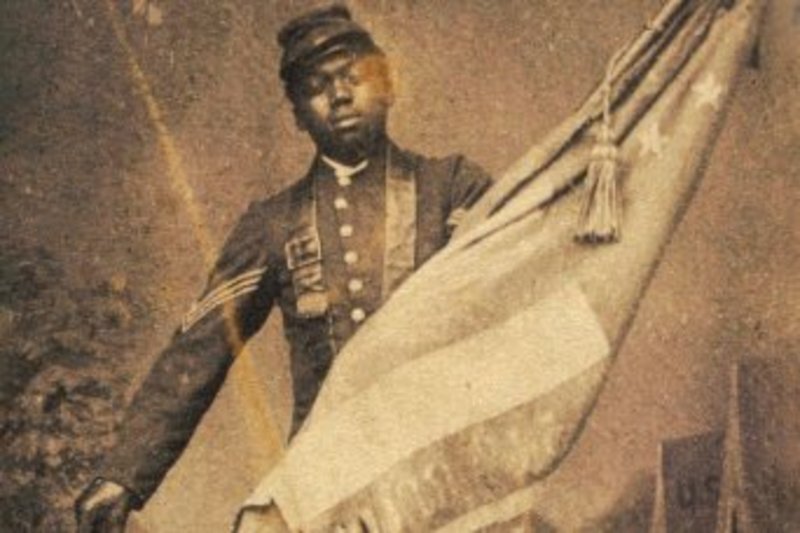 MAJ (Join to see)
Posted 2 y ago
What a great example of a hero.
(6)
Comment
(0)
Show More Comments
Read This Next
RallyPoint Home