Cpl (Join to see)
359
33
6
12
12
0
In a now declassed memo, the former DNI and russiagate pusher, james clapper, stated, he never saw any direct empirical evidence that the Trump campaign or someone in it was plotting/conspiring with the Russians to meddle with the election.

The never-Trump left had been feeding an addictive narrative to their base to overthrow a duly elected President. To those of us who aren't addicted to the MSM, it's been too obvious. The conspirators have to be held accountable.

Q: You mentioned also that, as you sit here today, you're not
aware of direct evidence of collusion. In the email exchange outlining
the meeting between the Russian Government lawyer and senior Trump
campaign officials, is that evidence of at least an intent to collude?

MR. CLAPPER: Well that's -- again, from a layman's perspective
only, that's what it appears to me.

Q: And we look forward to, as a committee, exploring those
issues, that if, in fact, damaging material is passed, as it was implied
in the email, and if the campaign took any actions in response to that,
does that sound like collusion?

MR. CLAPPER: Well, again, from a layman's perspective, if -- yes,
it does. 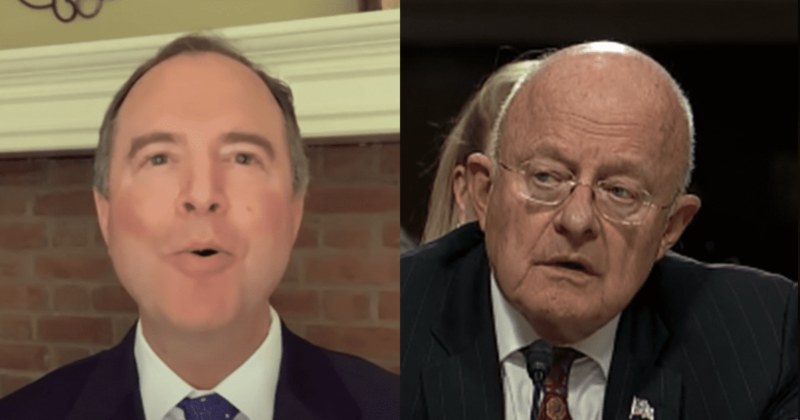 Posted from newsthud.com
Posted in these groups:

Sgt (Join to see)
Posted 1 y ago
In my view Cpl (Join to see) Attorney General James Barr has only scratched the proverbial surface... I believe that there will be much more to come, and I hate to mention it, but I would not be surprised if a few people mysteriously disappeared under exigent or strange circumstances...
(7)
Comment
(0)

SGT Cort Landry
Posted 1 y ago
I sure hope Adam Schiff gets his day in the proverbial limelight after it is all said and done. Along with Clapper, Comey, Obozo and the rest of the snakes.
(3)
Comment
(0)

LT Brad McInnis
Posted 1 y ago
There is a long list of leftist losers that went on TV and said there was a bunch of evidence of collusion, and yet, when under oath with penalty of perjury, they said there was no evidence. Makes you wonder what the goal of "news" actually is...
(3)
Comment
(0)

Cpl (Join to see)
1 y
They were all hoping to get highly paid "consulting" contracts with their praetorian guard media allies.
(2)
Reply
(0)
Show More Comments
Read This Next
RallyPoint Home