SGT (Join to see)
1.21K
30
6
11
11
0
"The Marines of Marine Wing Communication Squadron (MWCS) 38, 3rd Marine Aircraft Wing (MAW) applaud Alec J. Rubio, after he is appointed as an honorary Marine at Marine Corps Air Station Miramar, Calif., Dec. 19. Rubio, who was diagnosed with Adrenoleukodystrophy (ALD), a terminal illness, was awarded the title Honorary Marine by the Marines of MWCS-38, Marine Air Control Group (MACG) 38, 3rd MAW. (U.S. Marine Corps photo/Levi J. Guerra)
10 Jan 2019
Marine Corps News | By Levi Guerra
Given the command, "Fall in," Marines of Marine Wing Communication Squadron 38, Marine Air Control Group 38, 3rd Marine Aircraft Wing, assembled for what appeared to be a routine ceremony at Marine Corps Air Station Miramar, Calif. The tone was serious as the Marines stared straight ahead, eyes locked forward with discipline and concentration etched on to their faces when a red Marine Corps truck pulled up behind them.

The door of the truck swung open to reveal a squared away six-year-old boy wearing a crisp Marine Corps woodland uniform. His name is Alec J. Rubio, the latter stitched neatly above his right chest pocket.


Alec was escorted from the truck by his uncle and marched with purpose and enthusiasm to the front of the formation. Warrant Officer Brandon Cain, a utility and motor transport maintenance officer with MWCS-38, planned a surprise for his nephew. Alec took his place in front of the commanding officer of MWCS-38, Lt. Col. Koichi Takagi, who kneeled down and took Alec's small hand into his own and pressed the unit's challenge coin into his hand.

"Alec, this coin means that you are forever a member of Marine Wing Communication Squadron 38," Takagi articulated. "You are the newest and bravest member of the unit and we are glad you are here. Welcome to the Marine Corps!"

Alec's face changed from serious to a look of awe as he started realizing what was happening.

With the coin in his hand, it was official. Alec, who had been fighting against his terminal illness for the last few months, was an honorary Marine.

Alec's story began in June of this year when his mother noticed something had changed in her son that would impact their lives forever.

"We noticed he had a lazy eye, and it scared me," said Tereza Quesada, Alec's mother. "He'd look over and you would see it kind of lag, usually kids are born with it but he wasn't."

After several doctor appointments, Quesada still did not have an answer. As time went on, Alec's condition worsened from a lazy eye to a change in behavior and falling behind in school.

After several months, she was finally able to push for a brain scan; nothing could have prepared the family for the news that followed.

"He was diagnosed with ALD or adrenoleukodystrophy," she said. "There is no cure, but there are treatments to try and stop it."

The brain disease affects one in 18,000 people and is typically found in boys between the ages of five and 10. The average life expectancy of someone with ALD is between two and five years following the diagnosis.

At this time, Alec has already lost most of his vision and is struggling with his motor skills, his mother explained. There is no cure and the treatment can only halt the progressions after 6 to 12 months. Alec's late diagnosis makes it too late for the treatment to effectively work.

"This is not something any dad should go through," said Efrain Rubio, Alec's father. "It's the worst fear of any parent. It's hard but I try to keep my faith high and spirit up for him. You take for granted everything that you're so used to -- even him being able to see, being able to talk and being well coordinated. I took all of that for granted and now that it's happened, everything's changed. It makes you see what is really important."

Despite slowly losing his eyesight and some mobility, there is one thing Alec held on to -- his love of the military.

"Ever since he was little, Alec has always loved the military," said Quesada. "As soon as he could walk, Alec would throw on whatever clothes he could find and go out to play like he was in the military. He still does even though it's harder for him now."

When asked how his love of the military came to be, Rubio laughed.

"He must have always had it in him because I know it didn't come from me," he said. "It's just always been a part of him."

When Cain, heard about his nephew's condition, he knew he had to do something.

"Due to the nature of the disease and how aggressive it can be, my wife and I talked and we decided we were going to set something set up for him," Cain continued. "He's always wanted to be in the military so we figured, 'Why not get him in with the best?'"

They didn't have much time to get everything together. As Quesada explained, Alec would be admitted to the hospital in the first week of January and would be in for a long time. This timeline gave the Marines a little less than a month to set up a special day for Alec.

Cain went straight to the local Marines of 3rd MAW and was met with only positive reactions.

"It was one of those situation that hit the Marines too," he said. "Everyone is a family here. After talking to them, it was clear they were very open and excited to help."

Within two weeks, the Marines had their special day for Alec planned and ready to go.

"This brought hope and happiness to them," Cain said. "It shows how something as small as throwing a formation and getting the Marines together can mean to someone, especially someone who has looked up to us and idolized us for as long as Alec has."

After commanding his first formation, Alec led the Marines of MWCS-38 in a group training exercise where he ordered Marines to conduct exercises such as push-ups, sprints and jumping jacks. Following that he was given a tour of their vehicles, facilities and even aircraft.

"Once we were back inside the truck, he looked at me with a smile and said 'I'm a Marine now Dad, I'm really a Marine!'" said Rubio. "I asked him 'You're a Marine already? At 6-years-old?' and he told me 'Yeah, I'm a Marine already, I told you!'" 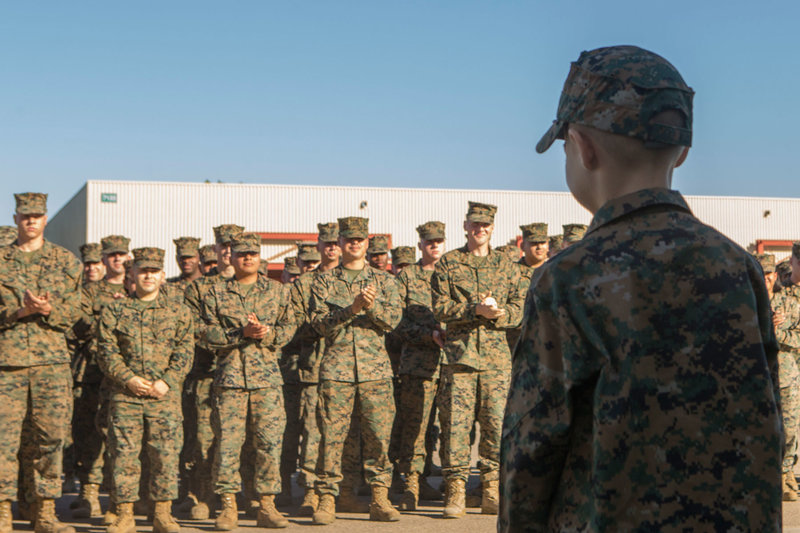 PO1 H Gene Lawrence
Posted >1 y ago
Thank you for the share. I was stationed there when it was NAS
(7)
Comment
(0)

SPC Margaret Higgins
Posted >1 y ago
Alec, Marine, young man: you are my HERO! I CANNOT SAY ENOUGH GREAT THINGS ABOUT YOU! I ADORE YOU, ALEC RUBIO!
EFRAIN RUBIO, YOU HAVE GOT TO BE THE BRAVEST MAN ALIVE! I LOVE YOU WITH ALL OF MY HEART, MIND AND SOUL. THANK YOU, SGT (Join to see)!
(4)
Comment
(0)
Show More Comments
Read This Next
RallyPoint Home