The complete works of Anne Frank

"The complete works of Anne Frank
When reading about The diary of Anne Frank, most people assume that a single diary is all there is. But in reality, Anne's work comprises much more. Here you can read what Anne wrote and how it all merged into the book you can now find in the bookstore.
When does Anne get her diary?On 12 June 1942, Anne was given a diary for her thirteenth birthday. It was something she really wanted. Her parents let her to pick one out herself in a bookshop.When does Anne start writing?On her birthday, Anne only wrote that she hoped that she would be able to entrust everything to her diary and that it would be a great support. The actual writing started two days after her birthday, on 14 June 1942.In which language does Anne write?Anne wrote in Dutch. On occasion, she used German or English words.

Anne addresses her diary letters to Kitty. Who was Kitty?Kitty was the fictional character Anne eventually addressed all her diary letters to. The name Kitty came from a series of books Anne had read, by Dutch author Cissy van Marxveldt. These books were about Joop, a girl who had all kinds of adventures with her group of friends.One of the books from this series was partly written in the form of letters. This inspired Anne to do the same: from 21 September 1942 onwards, she pretended to send letters to Joop’s circle of friends.Kitty Francken was one of the characters from that group. Anne preferred to write to 'her'. The Kitty character in the Cissy van Marxveldt books was ‘bright', cheerful, and funny. And so, Kitty became the imaginary friend Anne confided in.
So, who is 'Dear Kitty'?
None
What happens when Anne has filled up the diary she had been given?Anne took her diary with her when she went into hiding. It was one of the first items she packed.
The last entry is dated 5 December 1942. By then, she had been in hiding in the Secret Annex for five months. The diary was not completely filled, there still were several empty pages.
Anne added some texts at later dates, for instance on 2 May 1943 and on 22 January 1944.
Anne apparently considered the diary to be full and continued to write in notebooks. She would receive these notebooks from her sister Margot and the helpers.
The 1943 notebooks have not survived (see below). The two notebooks from 1944 have: one covers the period from 22 December 1943 - 17 April 1944 and the other from 18 April 1944 - 1 August 1944.
What is the date of Anne’s last entry?Anne's last diary letter is dated 1 August 1944, three days before the arrest.Does Anne only write in her diary?No, Anne wrote much more:
Tales. Anne wrote 34 tales. About her schooldays, things that happened in the Secret Annex, or fairytales she invented herself.
The Book of Beautiful Sentences. These were not her own texts, but sentences and passages she copied from books she read in the hiding place. Her father inspired her to do so.
Cady’s Life. This is the title of the novel Anne attempted to write. She quit after a few chapters.
Het Achterhuis (The Secret Annex). This was the title Anne had in mind for a book about her time in the Secret Annex. She used the texts of her diary as a basis. We therefore have two versions of some of the diary letters: Anne’s original diary letter and her rewritten version.

What inspires Anne to write a book about her time in the Secret Annex?On 28 March 1944, the people in hiding in the Secret Annex heard an appeal on the radio from Dutch minister Bolkestein, who had fled to London because of the war. He asked the Dutch to hang on to important documents, so that it would be clear after the war what they all had experienced during the German occupation.He inspired Anne: she planned after the war to publish a book about her time in hiding. She also came up with a title: Het Achterhuis, or The Secret Annex. She started working on this project on 20 May 1944. Anne rewrote a large part of her diary, omitted some texts and added many new ones. She wrote the new texts on separate sheets of paper. She describes the period from 12 June 1942 to 29 March 1944. Anne worked hard: in a those few months, she wrote around 50,000 words, filling more than 215 sheets of paper.

What are the main differences between Anne's diary and The Secret Annex?15-year-old Anne looked very critically at the texts written by 13-year-old Anne. She gave to the texts written during the first six months in hiding an especially thorough going-over. There, the differences between the original diary and Anne's rewritten version are the greatest. Since the original diary letters from 1943 have not survived, we do not know anything about them. It is noteworthy that in The Secret Annex, Anne left out her notes about her love for Peter and her vicious remarks about her mother, such as 'my mother is in most things an example to me, but then an example of precisely how I shouldn’t do things.'What does writing mean to Anne?Writing meant a great deal to Anne. It was her way to vent.The nicest part is being able to write down all my thoughts and feelings; otherwise, I'd absolutely suffocate. (Anne Frank, 16 March 1944.)She hoped one day to become a famous writer or journalist. Although she doubted from time to time whether she was talented enough, Anne wanted to write anyway.

Why have Anne's writings from 1943 (from 6 December 1942 - 21 December 1943) not survived?We do not know, nor do we have any clue how many notebooks there were for this period. So far, they have not resurfaced. Luckily, Anne’s rewritten version for that period has survived.How was the diary preserved?After the arrest of the eight people in hiding, helpers Miep Gies and Bep Voskuijl found Anne's writings in the Secret Annex. Miep held on to Anne's diaries and papers and kept them in a drawer of her desk. She hoped that she would one day be able to return them to Anne. When she learned that Anne had died in the Bergen-Belsen concentration camp, she gave all the notebooks and papers to Anne's father, Otto Frank.

After the war, Otto Frank published the diary. Were any changes made to the texts at that time?Otto did not just publish Anne's rewritten version, The Secret Annex. From 29 March 1944 onwards, he added Anne's original diary texts. He also reinserted some of the passages that Anne had left out when rewriting her diary. In 2000, it turned out that Otto had withheld a diary letter in which Anne was very critical of his marriage to Edith.The Secret Annex was published on 25 June 1947. Otto compiled the book from Anne's rewritten version, her original diary texts and some of her short stories. He also corrected the language errors in Anne's texts.In 1986, a scientific edition of Anne's texts was published. This edition presents Anne's diary text, her rewritten version, and Otto Frank’s version on the same page This shows clearly how Anne changed the original texts, which choices Otto Frank made, and what he adapted, omitted, or changed.

The complete works of Anne Frank

Posted from annefrank.org
Posted in these groups: 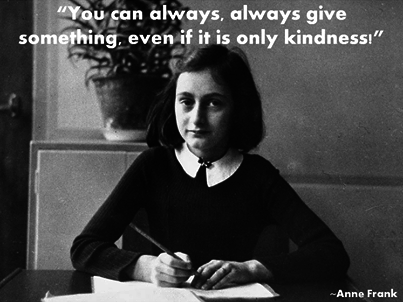