SGT (Join to see)
1.26K
30
11
14
14
0
On January 12, 1803, the US Senate approved Thomas Jefferson's nomination of James Monroe and Robert Livingstone to negotiate the purchase of New Orleans from France. From the article:

The Louisiana Purchase (1803) was a land deal between the United States and France, in which the U.S. acquired approximately 827,000 square miles of land west of the Mississippi River for $15 million.

[T]his little event, of France possessing herself of Louisiana, ... is the embryo of a tornado which will burst on the countries on both shores of the Atlantic and involve in it’s effects their highest destinies.1

President Thomas Jefferson wrote this prediction in an April 1802 letter to Pierre Samuel du Pont amid reports that Spain would retrocede to France the vast territory of Louisiana. As the United States had expanded westward, navigation of the Mississippi River and access to the port of New Orleans had become critical to American commerce, so this transfer of authority was cause for concern. Within a week of his letter to du Pont, Jefferson wrote U.S. Minister to France Robert Livingston: "every eye in the US. is now fixed on this affair of Louisiana. perhaps nothing since the revolutionary war has produced more uneasy sensations through the body of the nation."2

Background
The presence of Spain was not so provocative. A conflict over navigation of the Mississippi had been resolved in 1795 with a treaty in which Spain recognized the United States' right to use the river and to deposit goods in New Orleans for transfer to oceangoing vessels. In his letter to Livingston, Jefferson wrote, "Spain might have retained [New Orleans] quietly for years. her pacific dispositions, her feeble state, would induce her to increase our facilities there, so that her possession of the place would be hardly felt by us." He went on to speculate that "it would not perhaps be very long before some circumstance might arise which might make the cession of it to us the price of something of more worth to her."3

Jefferson's vision of obtaining territory from Spain was altered by the prospect of having the much more powerful France of Napoleon Bonaparte as a next-door neighbor.

France had surrendered its North American possessions at the end of the French and Indian War. New Orleans and Louisiana west of the Mississippi were transferred to Spain in 1762, and French territories east of the Mississippi, including Canada, were ceded to Britain the next year. But Napoleon, who took power in 1799, aimed to restore France's presence on the continent.

The Louisiana situation reached a crisis point in October 1802 when Spain's King Charles IV signed a decree transferring the territory to France and the Spanish agent in New Orleans, acting on orders from the Spanish court, revoked Americans' access to the port's warehouses. These moves prompted outrage in the United States.

1815 Plan of New Orleans
While Jefferson and Secretary of State James Madison worked to resolve the issue through diplomatic channels, some factions in the West and the opposition Federalist Party called for war and advocated secession by the western territories in order to seize control of the lower Mississippi and New Orleans.
Negotiations
Aware of the need for action more visible than diplomatic maneuvering and concerned with the threat of disunion, Jefferson in January 1803 recommended that James Monroe join Livingston in Paris as minister extraordinary. (Later that same month, Jefferson asked Congress to fund an expedition that would cross the Louisiana territory, regardless of who controlled it, and proceed on to the Pacific. This would become the Lewis and Clark Expedition.) Monroe was a close personal friend and political ally of Jefferson's, but he also owned land in Kentucky and had spoken openly for the rights of the western territories.

Jefferson urged Monroe to accept the posting, saying he possessed "the unlimited confidence of the administration & of the Western people." Jefferson added: "all eyes, all hopes, are now fixed on you, .... for on the event of this mission depends the future destinies of this republic."4

Shortly thereafter, Jefferson wrote to Kentucky's governor, James Garrard, to inform him of Monroe's appointment and to assure him that Monroe was empowered to enter into "such arrangements as may effectually secure our rights and interest in the Mississipi, and in the country Eastward of that."5

As Jefferson noted in that letter, Monroe's charge was to obtain land east of the Mississippi. Monroe's instructions, drawn up by Madison and approved by Jefferson, allocated up to $10 million for the purchase of New Orleans and all or part of the Floridas. If this bid failed, Monroe was instructed to try to purchase just New Orleans, or, at the very least, secure U.S. access to the Mississippi and the port.

But when Monroe reached Paris on April 12, 1803, he learned from Livingston that a very different offer was on the table.

Napoleon's plans to re-establish France in the New World were unraveling. The French army sent to suppress a rebellion by slaves and free blacks in the sugar-rich colony of Saint Domingue (present-day Haiti) had been decimated by yellow fever, and a new war with Britain seemed inevitable. France's minister of finance, François de Barbé-Marbois, who had always doubted Louisiana's worth, counseled Napoleon that Louisiana would be less valuable without Saint Domingue and, in the event of war, the territory would likely be taken by the British from Canada. France could not afford to send forces to occupy the entire Mississippi Valley, so why not abandon the idea of empire in America and sell the territory to the United States?
Napoleon agreed. On April 11, Foreign Minister Charles Maurice de Talleyrand told Livingston that France was willing to sell all of Louisiana. Livingston informed Monroe upon his arrival the next day.

Seizing on what Jefferson later called "a fugitive occurrence," Monroe and Livingston immediately entered into negotiations and on April 30 reached an agreement that exceeded their authority — the purchase of the Louisiana territory, including New Orleans, for $15 million. The acquisition of approximately 827,000 square miles would double the size of the United States.

Though rumors of the purchase preceded notification from Monroe and Livingston, their message reached Washington in time for an official announcement on July 4, 1803.

The purchase treaty had to be ratified by the end of October, which gave Jefferson and his Cabinet time to deliberate the issues of boundaries and constitutionality. Exact boundaries would have to be negotiated with Spain and England and so would not be set for several years, and Jefferson's Cabinet members argued that the constitutional amendment he proposed was not necessary. As time for ratification of the purchase treaty grew short, Jefferson accepted his Cabinet's counsel and rationalized: "it is the case of a guardian, investing the money of his ward in purchasing an important adjacent territory; & saying to him when of age, I did this for your good."6

The Senate ratified the treaty on October 20 by a vote of 24 to 7. Spain, upset by the sale but without the military power to block it, formally returned Louisiana to France on November 30. France officially transferred the territory to the Americans on December 20, and the United States took formal possession on December 30.

Jefferson's prediction of a "tornado" that would burst upon the countries on both sides of the Atlantic had been averted, but his belief that the affair of Louisiana would impact upon "their highest destinies" proved prophetic indeed.

The Louisiana Purchase
A Timeline

1682
René-Robert Cavelier, Sieur de La Salle, claims for France all territory drained by Mississippi River from Canada to the Gulf of Mexico and names it Louisiana.

1795
Spain reopens the Mississippi and New Orleans to Americans.

1800
Spain secretly agrees to return Louisiana to France in exchange for Etruria, a small kingdom in Italy.

February
Napoleon decides against sending more troops to Saint Domingue and instead orders forces to sail to New Orleans.

April 11
Foreign Minister Talleyrand tells Livingston that France is willing to sell all of Louisiana.

May 18
Britain declares war on France. 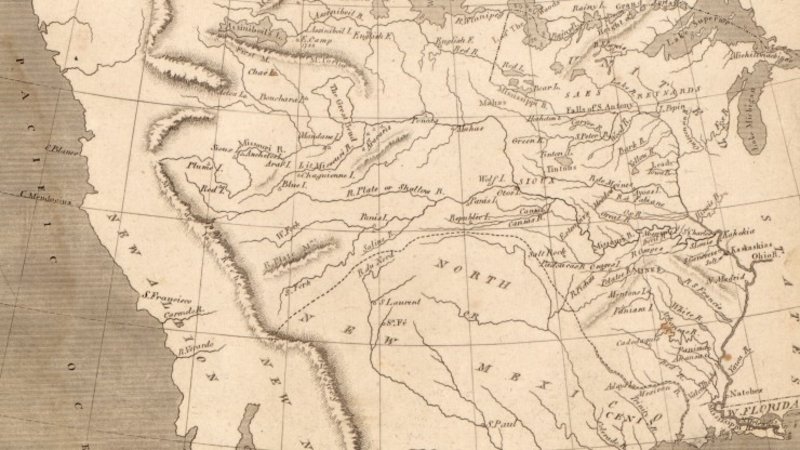 Posted from monticello.org
Posted in these groups:

SSG Michael Doolittle
>1 y
What is even greater is the story of Lewis & Clark's EPIC journey up the Mississippi and Missouri Rivers and on the West Coast via the Snake & Columbia Rivers. My own ancestry 28 years earlier, my GGGGG Grandfather a soldier in the King of Spain's Army was a Member of the De Anza Expedition of 1775-6, led by LtCol Juan Baptiste de Anza from the presidio of Tubac (south of Tucson) overland to San Francisco Bay where they founded the Presidio of San Francisco and the Mission San Francisco de Asis on June 27, 1776 a week prior to the July 4th Declaration of Independence... His first born son in what was known as California Norte Bartolome Francisco Bohorguis, was given the Land Grant "Rancho Laguna de San Antonio" in 1815 near what is today Petaluma California... The History of the West Coast is full of stories that fill our history...
(2)
Reply
(0)