The Marine Corps is now required to integrate men and women down to the platoon level during boot...

And though the Corps will still be allowed to have separate-gender squad bays ― where recruits sleep and shower ― with the passage of the 2020 National Defense Authorization Act the rest of training must be fully integrated down to the platoon level, according to lawmakers.

Maj. Joshua Benson, a Marine Corps spokesman, told Marine Corps Times in an email December 20, 2019, that, "Once (the law) is signed, we will immediately begin preparing to meet the requirements laid out in the NDAA."

Parris Island, South Carolina, will have five years to comply with the new law, while the depot in San Diego — which has not trained female Marines — will have eight years before it is required to take female recruits.

The Marine Corps said it could not provide any more details on how it plans to comply. 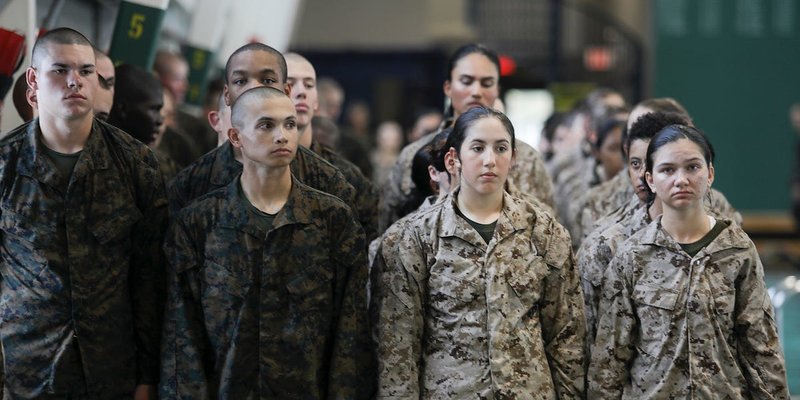 The Marine Corps is now required to integrate men and women down to the platoon level during boot...

SGT Kevin Hughes
Posted >1 y ago
I don't know why we keep ignoring biology - why don't we play to each other's strengths? We know our brains are different, our bodies are different, but our Humanness is the same. You don't need muscle mass to fly a plane, or manage an operation, or search for patterns in Intelligence. You want to carry bodies out of burning building, we need some mass, you want to know how to manage that fire, you need people in the right spot with the right equipment. And as so many of these threads have shown, bravery under fire, or courage to follow orders that might cost you your life- are not the domain of men who can lift a small car. But you put a bunch of eighteen year old girls, and guys together, under stress, and pretend they are not going to try and make babies...that is a dream world.
Figuring out who did what, and when, is going to make our current harassment morass look like clear glass.

I can serve under a woman, and have, and two of them were the best Sergeants I ever worked with - that isn't the issue. The issue is youth, hormones, and proximity. I think anyway.
(9)
Comment
(0)

Maj Scott Kiger, M.A.S.
>1 y
Sgt Hughes, you my friend get a connection request because unlike many others on here you are not afraid to tell the truth!
(3)
Reply
(0)

SGT Russell Chewning
1 y
Yeah, well.. Doesn't seem to be all that big an issue for the Israelis, yeah? I meant, I get what you are saying, I really do. It's just that the military is somewhat infected by a male machismo culture that minimizes women, and it starts out right in basic training. Leavening that a little with exposure to females in the same training environment might do its part to tamp down on that toxic environment. A drill instructor smoking an entire platoon for 2 hours for making an inappropriate comment to a female during training can go far towards instilling the idea that women are in fact, equal from a leadership perspective. If those smoked soldiers carry that belief forward to their permanent party duty station, I can only see that as a win. As it stood when I was a trainee, male soldiers spend their time describing in great detail what they'd do to a female sexually if they were within hands reach. And the Army wonders why it had a sexual harassment problem.
(1)
Reply
(0)

SFC Edward Jackson
4 mo
SGT Russell Chewning -
You can't really compare the Israeli's female soldier to our females in uniform because, Israel, South Africa, South Korea, and so many other countries where women are in the military are raised from teenagers to become a disciplined fighting soldier. That's one of the problem with today's military, are we developing Girl/Boy scouts , are we training to be cadets or a well trained fighting machine on the battle field. Sexually harassment as always been covered up, How does incorporating male/female basic trainees gonna help them adapt in the same environment. Here at Ft Gordon Ga, AIT female students are getting pregnant and they aren't living on the same floors in billeting as their male counterparts. C'mon, when the company commander at Ft Hood is relived for allegedly bullying his Nco's and Jr officers, and as far as male soldiers having sexual conversation, just because they do, does that mean they will act on it. Let's not forget female soldier also have sexual conversation with their peers. SLIPPERY SLOPE. Hmmmm!
(0)
Reply
(0)