The Story behind the famous “Saigon Execution” Photo

"The Story behind the famous “Saigon Execution”

Perhaps one of the most iconic images to come out of the Vietnam War this photo depicts a uniformed South Vietnamese officer shooting a prisoner in the head. When you look into it, however, there is much more to this photograph than first meets the eye. There is an undeniable brutality to this photo, but even Eddie Adams – who won a Pulitzer Prize for capturing this shot – later admitted that it didn’t tell the whole story and he stated that he wished he hadn’t taken it at all.

Looking at this image out of context, it appears as though an officer is gunning down an innocent prisoner, perhaps even a civilian. You are apparently witnessing a savage war crime. That is the reason this image was adopted by anti-war protesters as an indictment against the Vietnam War. Without understanding the background, there is no reason to think that is not the case. It seems like yet another image showing someone acting horrifically and immorally during war time. But, when you learn the story behind the man who is being executed in this photo, the image and the reasoning behind the execution becomes a little bit clearer.

This man’s name was Nguyen Van Lem, but he was also known as Captain Bay Lop. Lem was no civilian; he was a member of the Viet Cong. Not just any member, either, he was an assassin and the leader of a Viet Cong death squad who had been targeting and killing South Vietnamese National Police officers and their families.

Lem’s team was attempting to take down a number of South Vietnamese officials. They may have even been plotting to kill the shooter himself, Major General Nguyen Ngoc Loan. It is said that Lem had recently been responsible for the murder of one of Loan’s most senior officers, as well as the murder of the officer’s family.

Saigon Execution Murder of a Vietcong by Saigon Police Chief, 1968 3
According to accounts at the time, when South Vietnamese officers captured Lem, he was more or less caught in the act, at the site of a mass grave. This grave contained the bodies of no less than seven South Vietnamese police officers, as well as their families, around 34 bound and shot bodies in total. Eddie Adams, the photojournalist who took the shot, backs up this story. Lem’s widow also confirmed that her husband was a member of the National Liberation Front (Viet Cong), and that he disappeared before the beginning of the Tet Offensive.

After being captured with the bodies during the Tet Offensive, Nguyen Van Lem was taken to Major General Ngoc Loan. In a street in Saigon, Loan executed Lem with his .38 caliber Smith & Wesson.

The photographer, Eddie Adams, had this to say of capturing the photo:

I just followed the three of them as they walked towards us, making an occasional picture. When they were close – maybe five feet away – the soldiers stopped and backed away. I saw a man walk into my camera viewfinder from the left. He took a pistol out of his holster and raised it. I had no idea he would shoot. It was common to hold a pistol to the head of prisoners during questioning. So I prepared to make that picture – the threat, the interrogation. But it didn’t happen. The man just pulled a pistol out of his holster, raised it to the VC’s head and shot him in the temple. I made a picture at the same time…

The General then walked up to Adams and said, “They killed many of my people, and yours, too,” then walked away.

Was this the right thing to do? As with so many things connected to war, the answer to that question is murky at best. Military lawyers have not yet decided with complete certainty whether or not Loan’s actions violated the Geneva Conventions relating to the treatment of prisoners of war, so there is no official decision on the matter. From Loan’s perspective, the man before him was a cold blooded killer who not only killed some of his friends and colleagues, but their families and other innocent people. This was a dangerous man, who in the name of patriotism nonetheless believed his political stance justified his actions, as presumably did General Loan himself concerning the execution. The question is- how would you have reacted, on both sides of the coin?


This may have been the end of Lem’s life, but it was not the end of the story. The image of Lem’s execution, and public reaction to it, played a small role in bringing the Vietnam War to an end. Although that is no bad thing, it also demonized General Nguyen Ngoc Loan, which was something Eddie Adams was extremely sorry for. He was quoted as saying,

The General killed the Viet Cong; I killed the general with my camera. Still photographs are the most powerful weapon in the world. People believe them; but photographs do lie, even without manipulation. They are only half-truths. What the photograph didn’t say was, “What would you do if you were the General at that time and place on that hot day, and you caught the so-called bad guy after he blew away one, two or three American soldiers?”

Adams felt that, by taking the photo, he had ruined Loan’s life. He felt Loan was a good man, in a bad situation, and he deeply regretted the negative impact that the photo had on him. In fact, Major General Loan later moved to the United States. When he arrived, the Immigration and Nationalization Services wanted to deport him partially because of the photo taken by Adams. They approached Adams to testify against Loan, but Adams instead testified in his favor and Loan was allowed to stay. When Loan died of cancer in 1998, Adams stated, “The guy was a hero. America should be crying. I just hate to see him go this way, without people knowing anything about him.”

A few months after the execution picture was taken, Loan was seriously wounded by machine gun fire that led to the amputation of his leg. Following the war, he was reviled where ever he went. After an Australian hospital refused to treat him, he was transferred to the United States, where he was met with a massive (though unsuccessful) campaign to deport him. In 1975, the former General, Nguyen Loan, opened a pizza parlor, which he ran until 1991, when his identity was discovered and he was forced to retire after receiving many threats.

Nguyen Van Lem’s secret Viet Cong name, Captain Bay Lop, came from his wife, whose first name was Lop. Nguyen Thi Lop knew her husband, Van Lem, was a Viet Cong officer. But until she picked up a newspaper in February 1968, she didn’t know he had been arrested—or that he was dead, until she saw Eddie Adams’ photo of her 36-year-old husband being executed three days before by Saigon’s police chief, Gen. Nguyen Ngoc Loan.

Newly pregnant and fearful of the South Vietnamese authorities, Lop took her two daughters, then 13 and 3, from their house near Saigon’s airport and moved in with relatives nearby. She struggled, working a multitude of odd jobs, until the war ended. After the war she was given a monthly pension, a “gratitude house” and a scholarship for her son who was born eight months after his father’s death." 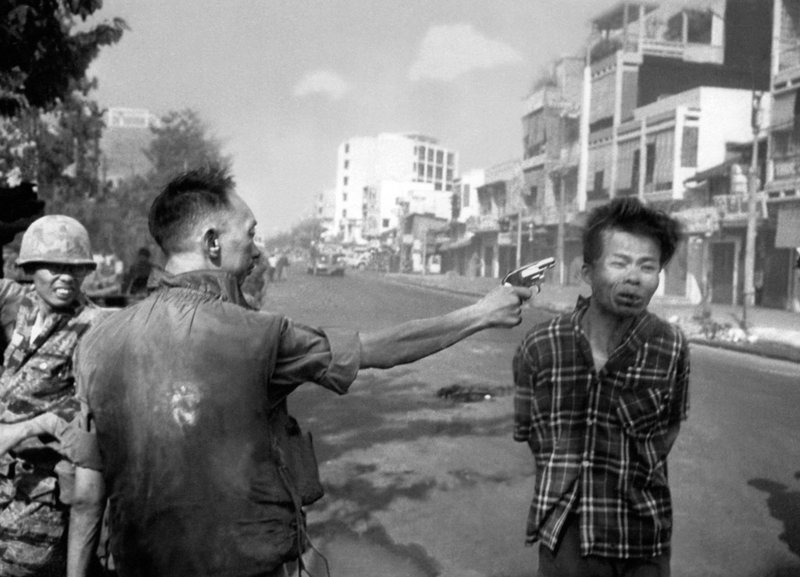 The Story behind the famous “Saigon Execution” Photo

Posted from cherrieswriter.com
Posted in these groups:

LTC (Join to see)
Posted >1 y ago
SGT (Join to see) Thanks for sharing this bit of history that sheds light on background of this iconic photo.
(5)
Comment
(0)
Show More Comments
Read This Next
RallyPoint Home